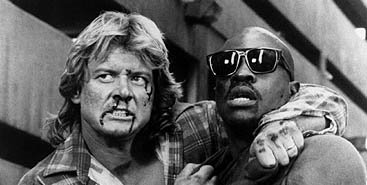 After watching a fairly clueless CNN report on the new Abolish the N-Word Movement, which is quixotically trying to get folks to erase "nigger" from their thoughts Eternal Sunshine-style... I felt the need to do something besides kick over the TV. So I did what Martin and Malcolm would do, typed an e-mail.

I'm sure I'm far from the first black person to respond to your campaign with shrugged shoulders and a deep sigh. You put some impressive resources to work on an issue CNN and the networks love to take up, which should tell you something right off the bat.

I guarantee you, outside of Black History Month, CNN's segment on Abolish the N-Word will be the only time we'll see uncensored images of Jim Crow-era lynchings on that network (not to mention Nina Simone singing her damning rendition of "Strange Fruit"). And why? Why did they take up your cause when we all know that the conglomerate that owns CNN couldn't give a damn about whether we call each other niggers or goldfish? Well, because, as the brilliant comedian Paul Mooney more or less said on that segment, the word was killed long ago, and the time for a public outcry against its use is long gone. When white people felt comfortable enough to use "Nigger" as a casual, public, almost clinical term for Black, it was a cancer. But I have not heard one black person utter the word "nigger" since I was born 33 years ago.

The word you are trying to erase is "nigga," one of the most beautiful and complex examples of black folks taking something meant to eradicate us and fashioning it into... a tool, a weapon, a way of instantly communicating our bloody common history, our interdependence and survival through it all. When a brother approaches me in the street, gives me a pound or a handshake and says, "What's up, my nigga?" I feel about ten feet tall. America may not be our home, but "My nigga" says we both know this fact intimately; that we are brothers because of it; that we have each other's back when the next wave of American ethnic cleansing comes to claim either of us. A simple "My nigga"--period-- is how many young people respond to the kindess of a stranger. It means "Thank you." It also means, "If we ever happen to cross paths in the future and you need something, I'll do my best to help you, friend."

We need "nigga." It is our Iwo Jima memorial and Vietnam Wall all in one. It is an elastic, useful, musical word that can stretch to fit all sizes of imagination, all kinds of complicated social situations. Richard Pryor, who also once made the well-intentioned mistake of trying to retire "nigga," crafted some life-changing comic poetry with it. Without "nigga," his wino-meets-Dracula skit wouldn't be such a dizzying world-historical tap dance. Or hilarious.

Don't worry about white people and others nudging into the "nigga" act. They want to be down. What else is new? Those are not the whites we should be concerned about, as they are merely trying on "nigga" to see if it helps express their own sense of alienation, trauma and defiant individuality in the face of dehumanizing American trends. How could I call myself thoughtful or serious and be mad at the skinny Korean hip hop kids I spot calling each other "nigga" on the corners of Flushing, Queens? I can presume that many of them don't know every twist and turn of the word's evolution, but I'd be foolish to presume that they don't know the general arc--from slur to all-purpose underclass Swiss Army Knife.

There is enough to say about "nigger" and "nigga" to fill 12 encylopedia voumes, so I better cut it short. But let me leave you with a suggestion: With all your web presence and media access, why not spark a movement to come to terms with three words that really are hard at work destroying our progress right now, "thug," "pimp" and "bitch"? These words, with the full endorsement of the media conglomerates (whassup, Jay-Z!), have helped cheapen our young people's understanding of themselves and their peer relationships. They have sexualized and criminalized the kids in their own eyes while making every social interaction a deeply cynical transaction between those who have enough muscle and possessions to live the good life and those who, as 50 Cent so idiotically put it, are merely "Window Shoppas." Our kids, rich and poor, are becoming violent, impulsive, selfish brats while the world crumbles around them, and the N-word has little to do with it.

Thanks for your time.