The EbertFest screenings consist of an introduction before, and a Q&A after the movies. The Q&A’s are usually the filmmaker and a moderator who asks questions and then takes questions from the audience. Welcoming us to every screening is Roger’s wife, Chaz, a bundle of energy determined to pump up the crowd and offer up interesting stories about the films being shown. So far, the highlight of Chaz’s introductions has been her Oprah imitation, which you can see streaming over at EbertFest’s website.

On Thursday, Chaz let the dogs out with two features starring man’s best friend. The first was Umberto D, Vittorio De Sica’s 1952 neorealist masterpiece about an old man and his dog. De Sica shows the human decency of the downtrodden as they make their way through their existences in Italy. Umberto D is about to be evicted by his landlady for unpaid rent. His only friends are the pregnant maid who cleans his landlady’s house and his dog, Flike. Flike is played by several completely different looking dogs, and is designed for the maximum “awww” factor.

Umberto D extracts water from your tear ducts by using devastating scenes like Umberto D’s inability to beg for money or his numerous attempts to get rid of Flike. It builds to a powerful climax involving Umberto, Flike and an oncoming train. Whether Umberto and Flike go the way of Anna Karenina is for you to discover.  Our Far Flung Correspondent post-film Q&A spent some time discussing what scenes choked them up and sent them running for the Kleenex.

The second dog feature was an adaptation of the novel My Dog Tulip. An animated feature hand drawn by its director and narrated by Christopher Plummer, Tulip is a must-see for dog lovers. It unflinchingly and lovingly details the 16 year relationship between the narrator (J.R. Ackerly, the author of the book) and his dog, a high strung Alsatian named Tulip. Tulip was rescued from a mean owner, and has behavioral problems that make Marley and Me look like Romper Room. Aided by the late Lynn Redgrave as his sister and Isabella Rossellini as some kind of dog whisperer vet, Plummer and the film discuss every aspect of Tulip’s plumbing, digestive and reproductive system. In other words, cartoon piss and dog shit fly everywhere, and there are scenes of doggy style that one audience member suggested should be in a porno. Director and animator Paul Fierlinger pointed out in the Q&A with his wife, Sondra and moderator Matt Zoller Seitz, “dogs are all about eating, dumping and humping.”

Fierlinger’s Q&A was outrageous, featuring tales of drowned puppies, dogs who won’t bark and friends letting friends eat their own dogs. It left the audience speechless. He also caused a spirited debate during the Umberto D Q&A over whether the film was set in pre- or post-war Italy. The audience was on Fierlinger’s pre-war side, while no one came to Ebert Presents At the Movies co-host Ignatiy Vishnevetsky's post-war side until Far Flung Correspondent Ali Arikan provided numerous items to support it.

I skipped Tiny Furniture on Thursday, but I did attend a karaoke session at Bentley’s with the Far Flung Correspondents and several other guests. Highlights included Rachael Harris’ cover of Salt N’ Pepa’s What A Man, Chaz Ebert getting her SuperFreak on, and director Robbie Pickering channeling Snoop Dogg and Dr. Dre (which explains my comment from yesterday). Matt Seitz, Pickering and I sang Simon and Garfunkel’s The Boxer. Paul and Art can sleep at night.

Speaking of sleeping at night: Last night I did not. It’s 8:52 AM and I’m delusional from sleep deprivation. Still, I’m off to see today’s features. I’ll find some way to slip out and re-register into my hotel between features 2 and 3 at the Fest. 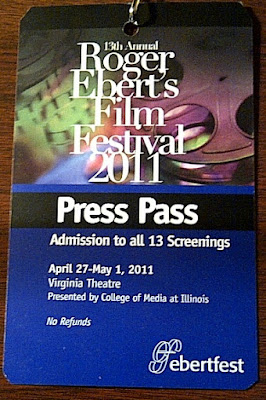 Today is the third day of the festival, which runs from April 27 - May 1st, and you'll have to forgive me if I'm filing items late. I'm having more fun than should be legal, and Mr. Ebert knows how to keep his attendees busy. I shall try to catch up today and tomorrow with multiple posts.

The festival schedule is packed with 13 films and several panel discussions with filmmakers and Ebert's own Far Flung Correspondents. The schedule is somewhat familiar for me; I've seen 9 of the films listed. The Far Flung Correspondents, or FFC's as they're called here, are, excepting Ali Arikan and Kartina Richardson, familiar to me only from Ebert's fantastic website. Their panel discussion yesterday allowed me to put a human costume on their words. More on that later.

I have a press pass, graciously provided for me by the festival and brought to you by this blog. So I do feel a small sting of shame for being late. I shall try to make up for it at some point. Meanwhile, let's set the stage by starting off with a brief explanation of how things work at EbertFest. An hour before a screening, people line up in front of the Virginia Theatre, a charming, old school movie house complete with balcony. People with festival passes, VIP passes and press passes have first dibs on the seats. In fact, the VIP's have their own section, as VIP's should. After the pass people occupy the seats, anyone with an advance ticket can enter. If there are empty seats after that, anyone can walk up to the box office and buy a ticket. In Ebertfest's 13 year history, I hear that not one person has been turned down for a ticket. So you have no excuse.

Thus far, I've seen four of the five films scheduled, and while that makes me a very naughty reporter, I had always intended on avoiding the movie I skipped. There are two films in the festival that I actively, perhaps vehemently, disliked, and I'm going to one of them solely for the Q&A afterwards. I've never said my opinion was the definitive word, so I hope the seat left unoccupied by my lazy ass (which went back to the hotel to watch The Office) was filled by someone who loved Tiny Furniture. I've yet to enjoy a movie made in this style, and knowing me, I doubt I ever will.

Speaking of the hotel: I'm about to get kicked out of it, so I'd better type fast. See, thanks to the Illinois Marathon, which runs tomorrow, I am roomless tonight. I had to make hotel arrangements from Wednesday-Friday, and then Saturday-Sunday. There were no rooms at any inn for your friendly neighborhood Odienator. Keep in mind that I made these reservations 4 months ago! It's ironic that something I love (movies) is being interrupted by something I used to love (long distance running), but it's also fitting: between my busted knee and the arthur-itis in my foot, running is as big a pain in the ass as being evicted from your hotel mid-stay. Tonight is an all-nighter, with me roaming the streets looking for trouble to get into. I'll duly report to you from somewhere on Saturday morning, even if it's jail. They have Internet access now, you know.

Some brief notes for now: 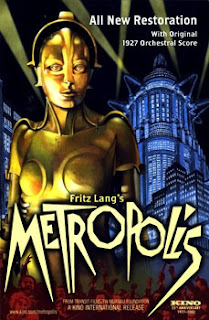 EbertFest opened with the complete (yeah, right--this is the fourth version of this movie) cut of Fritz Lang's 1927 silent masterpiece, Metropolis. The new cut, which I had seen, contains footage found in Argentina. The new footage is scratchy and worn--restored as well as possible--and adds even more heat and emotion to this classic. This complete version runs 74 minutes longer than its prior incarnations, and marked the seventh time I have seen some form of Metropolis. I first saw Metropolis in its 1984 incarnation as a tricked out, tinted, Giorgio Moroder-scored science fiction movie. That Razzie-nominated version is worth seeking out, if only to compare to this version, and to see just how bad music was in 1984, if you hadn't been privileged to life back then.

A far better musical accompaniment is attached to the EbertFest screening courtesy of the amazing Alloy Orchestra. They created a unique sonic universe highlighted by one of the most batshit go-go music numbers I have ever heard. What it accompanies in the film is perfectly synched, and to hear it performed live was incredible. Not to mention that these guys played, continuously, for 154 minutes as the film unspooled. I forgot they were there, which is high praise indeed for their timing and ability. The standing ovation by the maximum capacity crowd was long, sustained and more than well-deserved.

The second film on opening night was Natural Selection, which I will write about under separate cover. The writer/director, Robbie Pickering, and the star, comedian and actress Rachael Harris, were present at the screening and in some of the after festival activities. More on that later as well, especially about my conversations with Pickering, whom Dr. Dre probably wants to shoot right now. I will say that Harris turns in remarkable work here, which makes up for her being wasted in The Hangover.

If you see me roaming around at 3 AM tonight, stop by and say hello. I'm a night person, so I'll be nice. It's in the morning that I'm a real bitch.
Posted by odienator at 11:50 AM 1 comment:

I'm on my way to EbertFest, where I'll be reporting for this blog. In the meantime, please enjoy the latest e-convo between me and my fellow BMV troublemaker, Steven Boone.

It's been too long since we last had a Big Media Vandalism tete-a-tete, and I've got just the troublemaking topic for us: Emmitt Perry, Jr. Our reading audience will know him by his stage first name, Tyler. 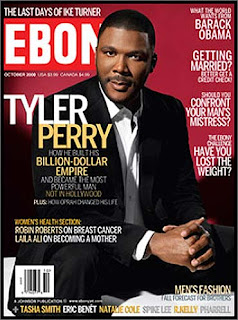 Dissed by Black directors for engaging in "coonery," and dismissed by the same critics who'd lick the asses of even worse directors channeling in mumblecore, Tyler Perry has nonetheless managed to succeed. Like Roger Corman, he has his own studio AND all his movies have made money. In the past 10 years, I've read numerous books on Zanuck, Louis B. Mayer, Harry Cohn, Jack Warner and other Hollywood moguls. After reading their exploits, I had to conclude that, in his own ghetto fabulous way, Tyler Perry has brought the old studio system back to Hollywood.

Read more at Tales of Odienary Madness!
Posted by odienator at 9:57 AM 1 comment: