For the first time in the history of Black History Mumf, I am NOT taking over this blog in the month of February. This is because, due to a technicality, I am now the proprietor of Big Media Vandalism. The forbidden allure of jacking this blog has disappeared. It is now my responsibility to post content on this site. My side hustle has become my daily grind. Let me tell you how this bullshit happened.

Steven C. Boone (the C stands for Cuyahoga) was fired by Bain Capital. No, not the one the Republican Robot runs! I’m talking about Barbara Bain Capital. You remember her? The chick from Space 1999? Well, my benefactor Mr. Boone has decided to devote his life to watching episodes of that cheesy assed 70’s TV show about a runaway Moon. This leaves him no time to run this blog. Please wish him well. As for me, I still have to keep up my end of the bargain. So here we go.

It’s déjà vu all over again. When I started this series, we were in the midst of an acrimonious Presidential primary season.  The economy was terrible and there was a war going on in Afghanistan. Politicians were scaring poor White folks into voting for them by saying insane shit about Black people. We had an adulterer, a rich robot from Massachusetts, a Black man and a batshit White woman who sounded like Marge Gunderson as candidates. Attack ads were so rampant that I was afraid to turn on my TV, and the 24 hour news media fanned the flames by running 525,600 versions of the exact same news item.

All this occurred in 2008, but it sounds just like the present day, n’est-ce pas? This means either I’m trapped in Tyler Perry’s version of Groundhog Day, or God is so fed up with us that He’s refusing to script a new episode of this bad sitcom called Human Existence. We’re trapped in an encore presentation on Heaven’s DVR, and we deserve it. If you doubt God’s capability for rerun re-running, check Ecclesiastes 1:9. “There is nothing new under the Sun.” In other words, your ass is in a repeat on Nick at Nite. 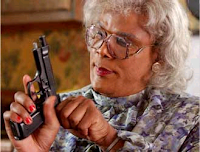 You think de Lawd’s the only one fed up? In 2009, I thought I couldn’t get any more cynical, but the events of 2010 showed me I had new depths to plumb. The insanity of 2011 had me going through the Earth’s core with a jaded shovel, hitting daylight in China. With 2012 being an election year, I may as well just hook myself up to an IV of Roofies so I can stay in perpetual coma until 2013. Otherwise, I fear I may spontaneously combust from the sheer friction of my aggravation with politicians, newscasters, and the general public.

The general public deserves most of my fury, and I’m not being partisan here. They pissed me off in 2008 when the Democrats were showing their asses too. The public drives what the 24-hour news media shows and what the politicians say. If attack ads didn’t work, politicians would run different ads. If you  didn’t watch cable news for fucking hours on end, they’d show something besides half-assed, barely accurate sound bite news story McNuggets. If you weren’t so gullible, the politicians wouldn’t try to convince you that a lobbyist’s interests are YOUR interests. And yet, CNN conducted a poll that said the #1 criteria for voters was identifying with the politician. They want someone “like us.” 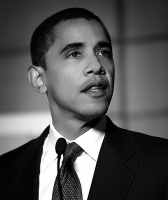 In 2008’s primary, I didn’t vote for Obama because he was “like me.” I mean, all we have in common is our skin color, that both our names begin and end with vowels, that we think Mrs. Obama is hot, and we both look damn good in a hat. I do not have a billion dollar war chest. In fact, don’t tell Prez Barry, but I didn’t vote for him in the 2008 Super Tuesday primary. I voted for the person whose campaign song should have been this.

I ask: Do you honestly want to vote for someone who is “like you?” If so, you or your Aunt Tillie should run for office because NONE of these candidates are like you. In either party. Are you rich? Do you  have millions of dollars so you can run attack ads? Do you have health insurance you don’t have to pay for? Did you go to an expensive school? If you don’t fit this criteria, then you need a better reason than “they’re like me, they’re really like me!” Because they’re not, and they know they’re not. So, they have to come up with something to get your attention, to distract you from the fact that, no matter how many “job creators” promise to help, you’re probably never going to be rich like them. Because if you were, you might have enough money to run against them and take their fucking job. And that shit ain’t gonna happen on their watch.

So, the politicians fall back on that old standby, the Divine Convincer Himself, God. 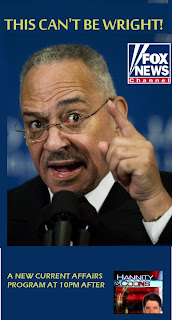 Now, as the son of a Baptist minister, I know something about this phenomenon. In fact, God told me to write this article. Go ahead, scream blasphemy! Why would God endorse anything with this much profanity? Well, I have it on good authority that they LOVE cussin’ up in Heaven. After all, God invented those words, and they’re good ones too. I am sure Saint Peter’s going to have some choice words for me when I step up to the Pearly Gates, and they ain’t gonna be “goshdarnit, doohickey and heck.”  When addressing me, St. Peter will need a seven-second delay before pressing the big ass button that says HELL on it.

A lot of you were OK when three of the candidates said God told them to run, so why is my statement any different? If a politician wants his stance, argument, or actions to take on added importance, just say it’s a mission from God. That’s one way to shield their true agenda from you. “You believe,” says the pol, “and so do I! I’m just like you! (Just with a shitload more cash…)”

And if that doesn’t work, our pals in the 2012 primary try a tactic we get a kick out of here at Big Media Vandalism: Demonizing Negroes! I’ve mentioned the Black Exorcist ripoff, Abby, plenty of times on this blog, so BMV is definitely pro-Demonic Negro! Folks like me, who grew up in the ‘hood, are a regular bunch of Abbys, possessed by a lack of work ethic and nurtured by food stamps instead of janitorial positions! Apparently even I, armed with a multi-lingual tongue and a grad school education, was never around anyone with a work ethic when I was in the ‘hood. (Sorry, Pops! Those 34 years you did on the line at GM were slacking off!) 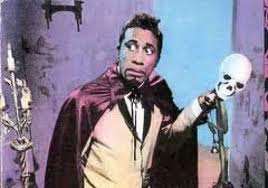 If in 2008, Obama had shown up at a debate dressed like Screaming Jay Hawkins and yelling “Burn, crackas, BURRRRN!” he wouldn’t have gotten elected. (I would have had a heart attack too, so thanks for small favors, Mr. President.) So why does the other side think this is going to work? You would think, as far right socially as the Black Church is, the GOP would have a built in set of voters. Same thing with many Hispanic groups. Why such offensive rhetoric, and why does one think it’ll work? Isn’t there anything nice one can say about we people darker than blue?

Politicians may not have anything nice to say, but I do, and that’s why Black History Mumf 2012 starts tomorrow.  This is the fifth year, and the last for me. So, I’m pulling out all the stops to deliver pieces on the movies and TV shows that shaped (and continue to shape) yours truly, this poor Black child who is only distantly related to Navin Johnson. The standard warning continues to apply: This is not a scholarly discussion. I cuss. I am not politically correct. I care not if you are offended. And I say nigga every so often, but always in a specific context. This forum is open to anyone, no matter your skin color, hair type, political affiliation or work ethic. If you’re new, to get a feel for the scenario, please start here and look at 2008’s pieces on up to today’s.

Special thanks to all the regulars who have  followed me on this journey—you know what to expect. And a welcome to the newcomers I hope to move and surprise. The first piece of 2012’s BHM @ BMV kicks off tomorrow, followed by a piece thereafter every day. We get an extra day, and on that day, I’ll present something I’ve been wanting to do ever since I started this thing. Until then, as I’ve said four times prior:

Creep with me through my neighborhood.
Posted by odienator at 4:13 PM 4 comments:

Something Noir Besides Our Owners 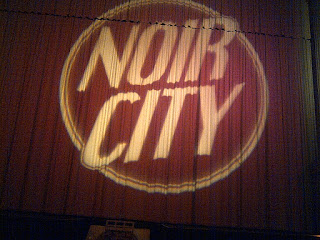 While you're waiting for Black History Mumf, check out my postings from the 10th Annual Noir City Film Festival in San Francisco! It's over at "The Odie Blog," Tales of Odienary Madness. 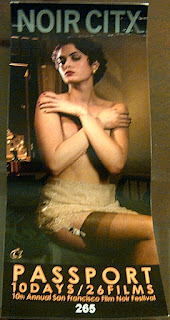 This is my ticket to all manner of dark joys.
I'm out here being a bad boy in San Francisco. The slogan for the Noir Festival is "No Happy Endings." Whether that's the slogan of my vacation is just too nasty for me to talk about right now.

But seriously, get your ass over there and read it every day. Don't make me show up at your house wearing this: 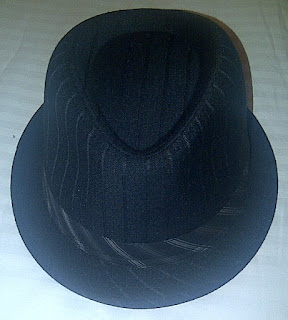 Posted by odienator at 8:05 PM No comments: