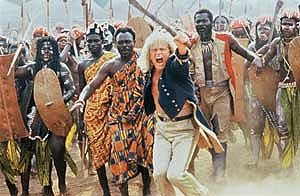 If the lucid lunatic actor Klaus Kinski were alive and had any interest in plying his trade in the American wasteland, he might sound like rennaissance madman Dirk Schlaf. Schlaf can't even post a classified ad without inciting cultural insurrection:

SEEKING THEATRE/FILM PEOPLE FOR INTENSE CONFRONTATIONAL NEW COMPANY
Looking for actors, writers, directors, designers for theatre company which is not for trust fund kids, academic onanists, artsworld bureaucrats or ethnic identity gangsters. Are you tired of the NYC theatre scene, which has decided its purpose is safe entertainmment for the bourgeois and the castrated "left"? Would you rather scare the living shit out of the bourgeoisie than entertain them? Are you sick of PC, channel 13, feelgood capitulation to a NYC establishment which is basically devoted to cutural genocide and killing the arts in New York? Would you rather die than ever apply to a corporation for a grant or beg some corrupt mediocre for money? If so, I want to work with you! If you hate suburban rich kid improv, feel good immigrant petit bourgeois ethnic celebrations, boring statues standing on stage pontificating in mid-atlantic julliardese, please RSVP motherfuckers!