More Trouble With the Odienator

First, John McCain ran an ad featuring Barack Obama and two of the Whitest women this side of Lisa Stansfield, calling it an ad about "celebrity." Then the McDaddy said Obama played the race card when Obama stated that he "doesn't look like all those other presidents on the dollar bills." Then Chris "Ludacris" Bridges wrote a rap song that got Obama in trouble, even as Bill Clinton was probably dancing to it back at his office in Harlem. It must be yet another "Remind Everybody Obama's A Black Guy" week!

Mr. Obama's team said "Barack Obama in no way believes that the McCain campaign is using race as an issue." Thankfully, his team doesn't represent Odiebama. Odiebama doesn't speak for Mr. Obama, nor would our Democratic candidate be crazy enough to be seen within 5,000 yards of such a tactless bastard as the Odienator—especially if he wants to win. Odiebama is Big Media Vandalism's fantasy character, the guy who answers "what would Odienator do if HE were running for President and this shit happened to him?" Let's find out. Here's the transcript of Odiebama's latest speech addressing the issues.

Once again, I must answer hints and allegations made by my esteemed Congressional colleague and fellow candidate for President. There's a reason the Republican party's symbol is an elephant, because there's an elephant in the room that people pretend to ignore, simply because its acknowledgement courts trouble. I am here tonight to first point out that elephant, then to address the latest comments leveled against me. I implore you: Open your eyes, America and see the elephant in the room!

My fellow Americans, I'm an African-American male. Whether you acknowledge it, or choose to faux-ignore it like a fart in a polite establishment, it remains constant, unchangeable and incontrovertible. I am African-American and no amount of wishing and hoping and praying and thinking and Clorox is going to change it. This is not a case of Watermelon Man-style tint alteration; I have been this way since God granted me life here in this great country we call America.

Now, I know some of you still have black and white TV's, so you may not be aware that I am of African descent. I wanted to point it out explicitly since I am being accused of finding some way to implicitly inject this fact into every single thing I say. I categorically deny that I make constant reference to my racial background verbally. I quantify that statement with the word "verbally," because my racial background gets referenced every single time my drop dead gorgeous mug hits your retinas. That, I'm afraid, is God's fault. If my competitor has issue with that, he will have to take it up with a higher authority.

Many of you in the press have asked me what I think of Ludacris' new rap song. Let me first ask you a question. Most of you in the press are the same racial background as Jeffrey Dahmer, Ted Bundy, John Wayne Gacy, John Wilkes Booth, and Tara Reid. Am I, or any member of, say, Ebony Magazine's staff, asking you your thoughts on Ms. Reid's latest drunkfest? Are we blaming you for the sins of the aforementioned? Of course not, because I wouldn't hold you responsible for every sin perpetrated on society by other members of White America. Ludacris is an African-American, but he's not the spokesman-slash-representative for Black America. We are not some kind of Borg. I'm here tonight to tell you that Black people can act independently! We can, and we do! 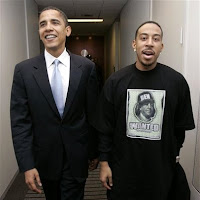 When I look in the mirror, I do not see Ludacris. Ask me about my politics, but don't ask me about other bruvas. As the Emotions once sang, "Don't Ask My Neighbors, come to me." I'm sure Luda feels the same way. Ask him about his rap, not me. I hear he's an easily accessible celebrity, and contrary to what you saw in Crash, I'm sure Luda won't pull a gun on you.

Speaking of celebrity, I must address the latest commercial from my competitor, which states that I am the biggest celebrity in the world. As my Mama used to say, "if the shoe fits…" However, I take issue with the celebrities I appear with in this ad. For someone so quick to state that I am using the race card, you would think he would put some other brown faces in the commercial besides me. Instead, the ad puts me next to two White women, Britney Spears and Paris Hilton. Neither Ms. Spears nor Ms. Hilton have reputations I would call chaste, which increases the likelihood that, if given the chance, they would engage in relations with me if so offered. Why couldn't I be in the ad with J. Lo and Beyonce? Or Will Smith and Denzel? Or even Tom Hanks and Tom Cruise, all of whom are celebrities of my stature and not talentless has-beens like Britney and Paris? I think it's to pull a Harold Ford, to put thoughts of a Britney-Odiebama-Paris reverse Oreo Cookie love-a-thon in the minds of one's voter base. A Beyonce-Odiebama-J.Lo Five Dollar Footlong doesn't have the same impact. At the end of the day, all it reflects is hateration and envy on their part. Do not hate the player, hate the game!

Lastly, since I am quote-a celebrity-endquote, I thought I'd have a little fun with the notion. I asked filmmaker Steven Boone to help me make this short clip to close out my speech. Thank you and God Bless America.

Odiebama (dressed as the Joker): I know a way to fix your problems here in Gotham. Problems with health care, with Iraq, with the economy, mortgages and high gas prices!

Well dressed man: How? What do we need to do?

Odiebama: Let me run things! After all, everyone loves me! I'm the biggest celebrity in the world! Here's my card. (Gives it to man)

Well Dressed Man: This card has Al Jolson on it!

Odiebama: Mmm-sorry! That's my race card! Here, take this one! (Gives card with a big colorful ODB logo on it.)