by Steven Boone
2009 is the year I quit film criticism for the fourth or fifth time. It was sort of like the local crazy homeless guy quitting his post as honorary mayor of the corner. Big whoop. I keep coming back to the block, hoping somebody heard my cry of doom and responded accordingly. The cry goes something like this: Cinema as a popular art form has lost the fundamentals that make its expensive products worth our time. Critics, content that a stubborn minority of classically trained filmmakers still endure at the arthouse and on the festival circuit, happily chalk up the disaster at the multiplex as Other People’s Problem. In other words, caviar for us, scraps for the rabble. It's the blithe attitude of Whole Foods shoppers toward the Food Stamp set, and it's disgusting.

And yet, until recently, virtually every film that made it to the multiplex, sublime or atrocious, was constructed of the same sturdy material: the shot.

I quit film criticism because somebody has banished the shot from mainstream commercial cinema.

That unit of film composition which lends film its cumulative power and structural integrity.

In place of the shot, like a leaky sandbag in place of a brick, somebody put... Well, what to call it, this fragment of film that has more in common with a spontaneous cutaway during Monday Night Football than with the ruminative, kinetic moving image discovered by Kuleshov, Porter, Griffith, et al? I once jokingly called it a gotcha-fragment, but that doesn't quite get it. The word for “shot” in the new century shall be…

No further explanation necessary, but it might be helpful to provide some examples. Here are some blurbs from your favorite cultural authority, revised:

"No matter how cynical you feel about Hollywood, it is hard not to fall for a film that makes room for a snatch of the Joker leaning out the window of a stolen police car and laughing into the wind, the city’s colored lights gleaming behind him like jewels."-- Manohla Dargis, The Dark Knight review

"Snatch" is perfect because it describes the image, the manner in which the image was acquired and what the image does to you. Snatches are snatched and they snatch you. By the waistband of your drawers. So, until equality returned to cinema and the average Joe viewer could enjoy shots again, I was determined to stay on strike. 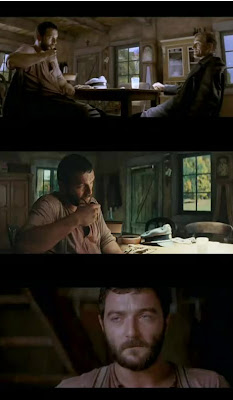 With Inglourious Basterds, the strike has ended peacefully. Quentin Tarantino’s divine slice of movie love is gloriously snatch-free. Every shot, even the ones that whizz by in a blur of violence, is set in stone, not graphite. Tarantino brought the might and resources of big budget commercial filmmaking to bear on the snatch malaise. No critic could attack the problem any better.

This isn't the first time Tarantino came to the rescue. In fact, each new QT feature rebukes snatch culture. Pulp Fiction arrived in 1994, the same pivotal year that Natural Born Killers, one of the first ever snatch features (ironically from a QT script) gave us a glimpse of the future in big screen storytelling.

Pulp Fiction's success over Natural Born Killer's mediocre run should have told the studios that people go to the darkened theater not to be snatched up but to be lured into a delicious trap. Trouble was that Ho'wood attributed Pulp Fiction's popularity only to the jokes and grisly killings, so it commissioned more smirky, bloody potboilers. As editors began to abandon rules developed over a century of filmmaker-audience call and response in favor of lazy shortcuts their AVID editing consoles enabled, shots morphed into snatches. Directors adopted multiple camera coverage, not for any inspired artistic reasons like Akira Kurosawa on High and Low or Spike Lee on Bamboozled, but merely to burn through script pages more efficiently, a la Richard Donner on the Lethal Weapon series.

Another pop power player, Robert Zemeckis, caught hold of audience attention spans that same year with Forrest Gump and later with Cast Away. (Dave Kehr on Zemeckis: "Like the classical Hollywood filmmakers he studied in the 70's as an undergraduate at the University of Southern California's pioneering Department of Cinema, Mr. Zemeckis is well attuned to the nuances of framing and camera movement. He stands as one of the very few filmmakers in contemporary Hollywood who are fluent and innovative in the visual language of the movies.") Also in '94, Frank Darabont's sleeper Stephen King hit The Shawshank Redemption told a grim prison tale in the manner of Frank Capra, full of Capra hokum but also Capra's patient, cajoling camera.


DVD arrived the following year, and such storytelling was suddenly marked for death. When the DVD market exploded, snatchery went into overdrive. The random access of DVD's primed audiences to accept and expect a steady deluge of gotcha-fragments in virtually any genre. (David Lynch waged a small protest in his Mulholland Dr. DVD by refusing chapter stops. If you wanted to skip ahead to any "good parts" you had to fast forward VCR-style at best.)

Portable media devices and web 2.0 further accelerated the spread of snatch, as editing became a matter of assembling shots intended for screening on a 320 x 240 px screen rather than the 20-footer at your local Loews.


None of these technologies are evil. They have freed consumers and media makers in countless ways. But it’s a post-colonial Africa kind of liberation: How to manage an inherited government and infrastructure without proper instruction, or with corrupt tutors?

Along the way, some filmmakers held fast to the tried and true. Many aging ‘70s auteurs (Spielberg, Coppola, DePalma, Malick, Scorsese, Lumet), of course, kept their cinematographic wits. Bankable directors like Joel Coen (Fargo), Ang Lee (Crouching Tiger, Hidden Dragon), Craig Gillespie (Mr. Woodcock), The Wachowskis (The Matrix), Sam Raimi (Spiderman), Sam Mendes (American Beauty), Steven Soderbergh (the Oceans films), Spike Lee (The Inside Man), Michel Gondry (Eternal Sunshine of the Spotless Mind) and Doug Liman (The Bourne Identity) could be counted on to retain the power of the frame and the well-considered cut. On the lower frequencies, Paul Thomas Anderson (There Will Be Blood), Spike Jonze (Being John Malkovich), Alexander Payne (Sideways), David O. Russell (Three Kings) and Wes Anderson (The Darjeeling Limited) also kept to the old rules, even as they bent them ever so gracefully to their singular visions.

Even masters of epic bombast like James Cameron (Titanic) and Mel Gibson (Apocalypto) knew that loony borderline kitsch didn't preclude lucid framing, while craftsmen like Ridley Scott suddenly took up the snatch trade in earnest (see the drive-by war flicks Black Hawk Down and Body of Lies). In a universe of his own, Michael Mann spent the aughts getting looser and jazzier on digital video (from Ali to Public Enemies), but never losing an intimate understanding of the rhythms he was subverting. 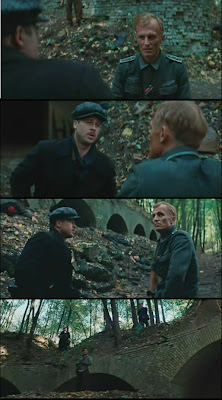 But it has taken Tarantino, with his infectious love of violent scenarios and grindhouse grand guignol to sell classical film technique not as a quaint alternative to snatch cinema but as the most vital, elastic and essential use of the form. Without shots, cinema disappears, and the movie house becomes just another noisy rec room.

In the 1980's, cineastes lamented the loss of the grand old movie palaces, whose architecture communicated a sense of cinema as a hallowed sanctuary. But the rise of the multiplex couldn't demolish the screen architecture that makes cinema a form of spiritual transportation, dream play and communal understanding-- the shot. Only the death of the shot has burned down the cinema. This hasn't stopped folks from attending movies in record numbers only because, let's face it, multimillion dollar marketing can sell you anything.

In a summer still reacting to last year's snatch apotheosis, The Dark Knight, Inglourious Basterds stepped in to assume the role of proper tutor. Whatever Tarantino's intentions, I happily project onto his film profound outrage at TDK’s senseless, anti-human use of screen time and space, along with an apostle's commitment to sharing his enlightenment with the deprived.