The True Meaning of Black Friday

I should be ashamed of myself.

Steven Boone, creator of Big Media Vandalism, turned over the keys to this blog to me months ago, and while I haven’t exactly been completely idle on the writing front, I’ve been writing less and none of it has been here. (Check both Boone and me out at Roger Ebert's Movies on Demand blog.) As Avenue Q so nicely put it, There is Life Outside Your Apartment. I’ve been trying to deal with mine.

But I’m here now, and it’s only fitting that my first piece as the “owner” of Big Media Vandalism is one of our commercials. You  may remember our Vote Or Get Your Ass Whipped commercials from Black History Mumf (here and here). Well, today is Black Friday! It's the one day of the year where shoppers wake up an ungodly hours of the night to fight over deceptively cheap sale items! With all the rumbles, riots, stampedes and pepper spray incidents, you don't have to be Sherlock Holmes to deduce that people of every race use Black Friday as an excuse to act like a buncha Niggas. That's why the Mad Men on Madison Avenue called it Black Friday.

I spend every Black Friday the same way: I gorge on movies rather than shopping. While you're reading this, I'm at The Artist and A Dangerous Method. I used to hit the malls on the day after Thanksgiving like everyone else. But let me tell you about two incidents that scarred me for life. 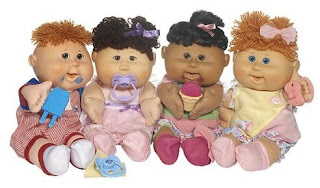 Remember Cabbage Patch Kids, the ugly ass dolls that smelled like powder and caused a shopping frenzy? They were my generation's Tickle Me Elmo. My sister wanted one for Christmas, so I went to several stores. They proved as elusive as a deadbeat dad running from child support payments. But at a Kmart, I found a doll. Two women were standing in front of the display, arguing over who saw it first. One woman poked the other, and that led to a blue-light special on catfights. As the women tussled and fought, knocking down other displays and screaming profanities, I casually walked up and took the doll off the shelf and bought it for my sister. I remember both the doll's name on its "birth certificate" (Joya Kitt) and the look on the women's faces when they realized I'd taken off with the object of their affection.

"Hey, stop that kid!!" one screamed. I started running. They chased me, but thankfully, Kmart security stopped both of them due to their prior catfighting. "I hope you die, asshole!" one of the women screamed at me.

The second incident occurred when I was much older. I was in JCPenney when this motherly woman approached me. "Excuse me," she said, "but you're the same size as my son. Would you mind trying on this coat?" I tried on the coat, a three-quarter Shaft-style leather coat. It fit me perfectly. "Where did you get this?" I asked her. "From over on that rack." She pointed out the rack of coats. 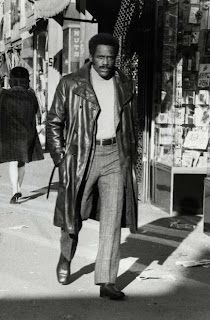 I checked the size on the coat I'd tried on, and then went to the rack to find it. After digging for a minute or two, I found one coat in that size. As I was taking it, this crazy-eyed woman appeared in the aisle, as if summoned by magic.

I looked at her as if she were nuts. As I continued to walk, she yelled out "HEY! I hid that coat on the rack! It's mine!!" I walked faster. So did she. "Gimme that coat!" she yelled, "OR I'LL KICK YOU IN THE NUTS!!"

Immediately, my body went into prep mode. Adrenaline started pumping. "Is this bitch actually going to fight me in the store?" my brain asked in panic. I outweighed her, and I was bigger than her, but none of that would matter if she had a gun in her pocketbook. There was a very short line at a register about 20 feet away from me. I made for it, almost in a sprint. I could hear heels clicking on the store floor, sounding like the Morse Code for "I'ma Beat Yo' Ass!" As I got to the register, the woman behind it shot a dirty look over my shoulder. Her face said "try it, bitch! Make my day!!"

I left the store with my coat and immediately went to my car. I was terrified that woman would be inside it like a slasher movie monster. I'd look in the rearview and she'd be there. "COOOOAT!!" she'd yell before stabbing me in the neck, causing my car to flip over and explode. The next shot would have been the woman spinning around in the street like Leatherface, holding a burnt up coat instead of a chainsaw.

That didn't happen, but the incident killed my desire for any Black Friday shopping.

So I decided to redefine Black Friday as a cheerful Hallmark Card Holiday. Who doesn't love holidays? You already have the day off, so let's recast today as a more positive event. Here's Big Media Vandalism's latest commercial. It's for a different kind of Black Friday. And remember the BMV Commercial Credo:

JT: Hi, everybody! I'm Justin Timberlake, singer, dancer, entertainer, actor and lifetime Ghetto Pass Holder. I'm Blacker than a lot of people you  know, (coughhermancaincough)  and I'm here to tell you about the latest way to send one your love. No, it's not another Dick in A Box! That's for Christmas. This is for Black Friday. No, not the one where you kill people over flat screen TV's and toys at Walmart, the one where you show your affection for that special someone in your life.

That's right: Hallmark Cards is introducing greetings designed specifically for your token Black friend! They teach you Soul(TM) and give you valuable advice you can't get from your rich, preppy friends. So, show 'em you care!

Let's see how it works!

Chip: Yo, you know I appreciate you being my nigga, my ace boon coon and all dat, right?

Tyrone: Yeah. You my nigga too, G.

Chip: Yo, I know I don't show it, cuz that shit is gay, but (pulling out card) it IS Black Friday, and I just wanna give you this, you know, to say thanks and shit for givin' me street cred amongst my suburban homies, helpin' me talk to the sistahs and making me look legit on the dance floor when we at the club.

Tyrone: Aw man, you shouldn't have. This is some cool shit right here! (Opens envelope. Reads the front of the card) "To my nigga!" (Opens it, reads inside) Widoutchu I'd be just another wigga! (Closes card) Aw man!

Chip: I mean it man, from inside here. (Pounds his heart with his fist)

Tyrone: Aw, I'm all choked up and shit. (Gives Chip a pound and a hug.)

JT: See! The token in your crew is bound to appreciate these cards, with special sayings from Eminem, Robin Thicke, and Dr. Maya Angelou! And it's not just for da homeboys! We got 'em for the honeys too!

Muffy: Oh my GOD! Shenequa, you are my number one bitch!

Shenequa: Gurrrl, I know! And I so appreciate this "Sorry for tryin' ta fuck yo' man card!" I was all ready to pull those fake ass blonde extensions out yo hair and now this card! We cool now!

JT: So don't forget! Black Friday falls on November 25th this year! Ladies, make the token Negro in your life feel like Rhianna--the only Gurrrrl in Your World! G's, help your homeboy get his Franklin from Charlie Brown on! Hallmark: When You Care Enough To Show Just How Narrow Minded Your Ass Really Is!


Happy Black Friday, everybody!
Posted by odienator at 4:04 PM No comments: