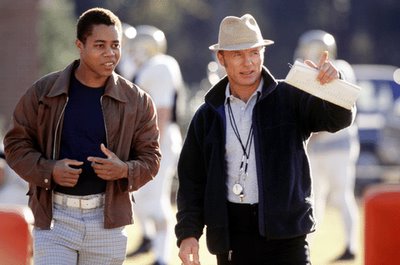 Cuba Gooding, Jr. is married to a white woman. To many black people for whom Jim Crow is more than funny name, this is a moral lapse on par with a cocaine habit. As fodder for black comedians, Gooding resides in the same section of the file cabinet as Tiger Woods, Wayne Brady and Taye Diggs. The third-rate movies he has made since a promising breakthrough in Boyz in the Hood, meanwhile, are good for bargain-basement laughs.

But is he any good?

This question doesn't seem to trouble even fellow black thespians like David Alan Grier, who once dissed Gooding's dubious achievements on a Jimmy Kimmel appearance. But in a media culture that praises an affectless poseur like Johnny Depp while dismissing a go-for-broke artist like Vincent Gallo, the question of Gooding’s actual talent is a complicated matter.

The short answer: He’s a comic genius with the innocence, pluck and vulnerability of Chaplin, Keaton and Lloyd. In films like Snow Dogs, Rat Race and Boat Trip, Gooding is a silent film star (and, given each film’s abysmal dialogue, all the better.) With a rubber face that seems a cartoonist’s rendition of a handsome porter, Gooding doesn’t push an image of leading man suaveness or heroic bravado. So far, he has mostly gone for boyish slapstick, pathos and fear. Gooding’s characters suffer for their soft-hearted decency. Troy’s famous nervous breakdown in Boyz is the dramatic template for his comic characters—good guys pushed way too far. If he, not Ving Rhames, had offered Jack Lemmon his Golden Globe award, not one eyebrow would have risen. Lemmon could stretch exasperation across an entire movie without exhausting our patience. Gooding has the same comic gift. But where Lemmon’s thing was rumpled middle-aged sheepishness, Gooding’s genius is Boy Scout civility abused to the breaking point.

Only one factor paradoxically Americanizes and radicalizes Gooding at the same time: His skin color. Imagine Buster Keaton staging his underdog triumphs in the skin of a black man. If such films had been possible, they might have affected the American landscape and future as mightily as hurricane Katrina. “Birth of a Nation” reinvigorated the Klan; a black comic of Gooding’s fragile humanity could have dismantled it. Gooding may retch, squeal, mug and bulge his eyes, but he does not play buffoons. His characters are squares—what kids now call cornballs or birdheads. They wouldn’t even make the first cut of Damon Dash’s The Ultimate Hustler. In “The Fighting Temptations” Gooding plays a cornball who thinks he’s a hustler and is widely taken to be a corporate sellout. But over the course of a rote fish-out-of-water plot in which he ends up the leader of a Down South gospel choir, it becomes clear that he is simply afraid of losing out on the American Dream. He has lied about his education to get a rung on the corporate ladder. And at the height of his humbling reeducation as backwoods choirmaster, he abandons the group to help a company market malt liquor to the urban demographic (in an obvious but giddy little bit of satire).

We’ve seen this kind of hustler-goes-straight comedy a trillion times. Richard Pryor, Eddie Murphy and all their lesser spawn have helped racialize this kind of tale. But until Gooding, we hadn’t seen the implosive effect hustling one’s own race can have on the psyche. Watch Gooding in the boardroom attempting to convince himself as much as his fellow executives that the malt liquor plot is a good idea. Shakespearean.
Posted by Boone at 12:45 PM

Cuba coons like his life depends on it, which it does. He fills that corny, smiley, safe Black guy spot that Hollywood needs. I've seen this guy at clubs and pool halls here in LA and he forgets to shut off the Rod Tidwell switch in real life. I just don't think he's that solid of an actor, and in addition to that he chooses horrible roles.

Don't know about who or what Cuba is in real life, just that he's a far better actor than most give him credit for. If he had the wisdom to hook up with the right material, we wouldn't be so ashamed of him.

Side note: I hope one day that the space between corny/smiley and sullen/thuggish gets filled in. In the meantime, I prefer corny/smiley.

I haven't put the time (or money) to see anything of his beyond Boyz, Jerry Maguire, As Good As It Gets and A Few Good Men. Your arguement is convincing but so is the one that every black actor must face once they get some sort of recognition. Do I fight like hell and potentially go broke to play meaningful, realistic parts that are going somehow give me clout in the industry or do I "play black"? Not an easy decision at all but I think when you do have position in the industry like I think he does and you choose to do somethings like Rat Race, Snows Dogs and Boat Trip all in a row you can see where the backlash might come from.

This isn't just an actor thing either. Look at Matty Rich. That kid had the golden ticket. Directed Straight Out of Brooklyn in 1991 then The Inkwell in 1994. Now, MIA. For whatever reason, the pressure of dealing with the industry, being too young, he just disappeared. It seems that Spike, Singleton and a couple of others are the ones that secured a position as the ones to "represent".

The down side is Cuba probably does have something good inside him with the right material. Is he smart enough to take the time to seek it out? Who knows?

All I know is when he was on stage at the Oscars after his win for Jerry Maguire he was then branded by both black and white, industry and audience. I felt a collective cringe. Why can't a black man celebrate his win like any other actor without being branded a coon? Because this is America baby! Katrina brought that point home. As we all know the last thing we go to see a Hollywood film for is the truth, that's why. You get a little taste of it, enough to make you feel like you are watching something important, then the triumphant cymbals crashes in to cue up the hero overcoming his odds at the end (tear rolling down my face). The old bait and switch. Nice and neat.

It would nice to see an actor like Cuba playing anything he wants. I hate to break it to America but not all black people are basketball playing, drug dealing, thug life 4 ever representations of their race. Those parts are there and I think to not play those parts because it represents my race in a bad way is foolish also. Play the drug dealer if you can bring a humanity to him. I just watched the whole first season of The Wire on DVD for the first time and it's amazing because both sides of the law are given their humanity. Everyone in that world is. It's boring any other way.

I don't think the problem is with Cuba I think it's a lot bigger than that....

Sorry for the rant...