Set in a detention camp in an America of the near-future, Punishment Park's pseudo-documentary style (continuing Watkins' subversive innovations with Culloden and The War Game) places a British film crew amongst a group of young students and minor dissidents who have opted to spend three days in 'Bear Mountain Punishment Park'. The detainees, rather than accept lengthy jail sentences for their 'crimes', gamble their freedom on an attempt to reach an American flag — on foot and without water — through the searing heat of the desert. The pursuit of Group 637 — a lethal, one-sided game of cat-and-mouse with a squad of heavily armed police and National Guardsmen — is contrasted with the corrupt trial of Group 638 by a quasi-judicial tribunal. 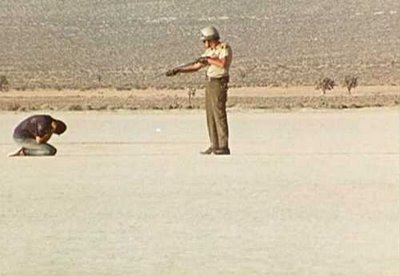 This is not the smirky, self-possessed satire you'd get from the likes of Gary Trudeau and Robert Altman. None of that smug liberal mumbling. PP is a full-on convulsion of rage and paranoia from a year that saw massive anitwar protests in San Francisco and D.C., the U.S.-backed invasion of Laos, a Hariss poll that put opposition to the Vietnam war at 60% and the publication of the Pentagon Papers. This movie wants blood.

As with most artifacts from the age of assassinations, Punishment Park gets gently patted on the head by mainstream critics. You'd think it was Kurt Vonnegut's latest book or something. Even while acknowledging parallels to our time, Dave Kehr's New York Times review of the film virtually yawns while delivering the faintest of praise. Still, it's easy to see why Punishment Park might be written off as a relic: The sometimes contrived shouting matches and general stoicism of the cops and soldiers; an improbable desert tribunal that allows its defendants to get as unruly as Saddam on trial before letting the guards dramatically muffle and drag them away, flailing and cursing.

But the main business of Punishment Park is serious business. Watkins lets his politics ride mainly on a few indelible, archetypal characters--radicals and pacifists we've come to know best as pop culture punchlines.

What ties these disparate "militants" "semi-militants" and "pacifists" (as they are labeled in the closing credits) is the absolute conviction that they are right. They are also bound by mainstream society's hostility and condescension toward them. "You don't know the first thing about love, with your love-ins," is how a motherly civilian panelist scolds one of the defendants. Another accuses him of "having orgies all the time" and "wanting us to pay for it." These solid citizens articulate notions of Johnson and Nixon era counterculture cemented as caricature in Midnight Cowboy-through-Forrest Gump: Angry, aimless, narcissistic hedonists. The Manson Family. Patty Hearst.

Better than any counterculture flick I've seen, Punishment Park answers these charges with determined fury. As the radicals, Watkins cast personalities who seem to live and breathe their political convictions. Their rage springs not from some campus-cultivated sense of entitlement and moral superiority but from a deeply reasoned and experienced understanding of the issues. The unruly kids of Punishment Park don't daydream of a utopia; they have the detailed plans for an alternative society not based on war, imprisonment and consumption. They know exactly what they'd do if they were in charge. Which is why, while some of the panelists find them amusingly idealistic, the government takes them seriously enough to want them dead. 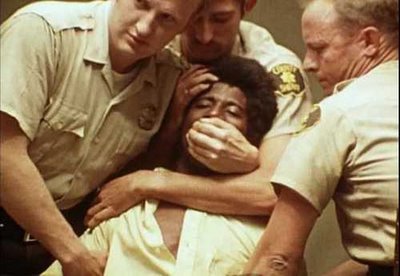 The liberal meltdowns in this movie are enough to provide a career's worth of intro samples for a political rap group like Dead Prez or P.E. And many of them harmonize so resonantly with our current state of disaster, it stings. Punishment Park is afire with verbal molotovs signaling that the only change 'round here since '71 is the price of oil. One black militant--who I can imagine Richard Pryor portraying with operatic fury--responds to his accusers thusly:

No wonder the dividend-drawin' New York Times shoos this movie away with a shudder and a yawn.


Photos from dvdbeaver.com and Punishment Park official site.
Posted by Boone at 4:12 AM

The film is inspired by the upheaval of the late sixties in the US, when the government has increased its legitimized use of violence and oppression, while the anti-war movement reacts increasingly violent and radical