When I Grow Up I Wanna Be: Mattson Tomlin 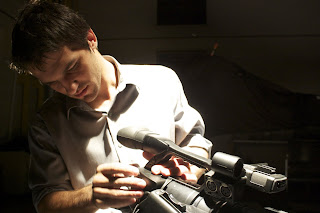 I don't know much about Mattson Tomlin, but the basic facts that he's using to help promote his filmmaking efforts inspire me to keep making stuff and showing it to people. At 19, he has just raised a little over $12,000 on kickstarter.com to shoot his film Solomon Grundy: Born on a Monday. A film student at SUNY Purchase, he has already made three feature films and a slew of shorts. His enthusiasm is reminiscent of young Spielberg. His resourcefulness and independence are what all this new technology is for.

What possessed you to start making films?
There is a mounting energy inside of everyone that screams to get out. Some people spend their whole lives searching for their calling. I was fortunate in finding filmmaking was an all encompassing release valve for this creative energy. From a very young age, performance of all kind was so enthralling. When I discovered writing and directing, a whole new world was opened up. Now, if I go even a day without doing some of that work, I really feel it. It's a total labor of love, and I wouldn't want it any other way.


What theme or interest or ambition ties all of your films together? What are you trying to express?
All of my work is very psychological. I didn't realize it until this year, but so far, most of what I'm drawn to filmically relates to the mind. Be it the way we perceive things, our dreams, our fears, or the way we store memory. Everything for me right now comes back to the mind. The films I shot in high school were all about perception and misconception. The films I tend to gravitate towards in my college years seem to be much more about inner demons and fears, and what happens when they get the better of you. I realized last year that you truly can be your own worst enemy, and unintentionally, my work has really been exploring that revelation.


What kind of audience do you seek? Who are they?
When you're a young filmmaker, the largest struggle after making the actual film is getting anyone to actually watch the damn thing. To this day I find it absolutely humbling when someone sits down and watches my work. In this day and age with everything available at a click of a mouse, it's much harder to get people to sit still for more than a 30 second clip. Once I get past that barrier, I suppose my audience is people willing to think. My favorite movie goer is the kind of person who will see a film, then three days later in the middle of the day still have the urge to strike up a conversation about it. If I can ever have an audience that will do that with my films, I will be more than happy.


What do you make of the phrase “21st Century filmmaker”? Does it have any meaning for you at all?
I think the term is quickly defining itself. The 21st Century filmmaker picks up a digital camera, edits on the train ride, and uploads to the internet at the end of the day to get a hundred hits by the time they go to bed. The technology is so different, and continues to change so rapidly. Very few things separate the students from the pros, when it comes to technology these days, and the new generation of filmmakers has never known anything else. It's not adapting, it's just existing.


Why do you think folks are supporting your film so readily? Not everyone on kickstarter gets that kind of response.
I think the source material speaks to them firstly. At least, I hope that's the case for the majority. I shot an 8 minute proof-of-concept film to help get my feet on the ground, and I think if people hadn't had the tangibility of seeing my abilities under a small budget under extreme constraints, it would have been a harder sell. I think the proof-of-concept also showed people a bit of the vision. The film is about a man with a violent imaginary friend. There are a few ways to go about it, and the way I wanted to attack it, it's much easier to show people than to tell people. Aside from the source material, I pushed it like nobodys business.  Back to what the 21st Century Filmmaker is- they also don't have to wait for someone to give them a budget- they can send out a tweet and a status update instead. I really believe in Solomon Grundy, and I think at the end of the day, truly believing in something still speaks to people.


What is success for a filmmaker?
Having fun. Not having to hold back. The filmmakers that I would consider have real success are the ones that don't treat it like a job, but treat it like their own life. I pray everyday that directing is never just a job that puts food on the table. The directors who can spend several years workshopping a project, something they truly believe in, and make a movie because it's the film they need to make are the ones who are truly successful from my point of view. If I can be a filmmaker who makes a film out of passion and not out of necessity, I'll consider myself successful.

What is selling out?
I think the only way someone can truly sell out is if they're willing to commit themselves to something they don't believe in. Every time a prominent director makes an awards movie, something they'll push on the academy, they're accused of selling out. I don't think that's true at all.  If there is true belief in the project, if it's something you care about, there's no such thing as selling out.  I suppose the ones who take on a directing gig for the paycheck before investing themselves in the content sell out. Maybe they have to.


Which filmmakers or artists do you revere?
The list goes on and on. Anyone who can take my attention and make me want to sit down and watch the film six times in a week really knows what they're doing, and there is a reason that Aronofsky or Fincher or Anderson continuously come up on peoples lists- it's because the degree of control over their craft is totally awe inspiring. I think most recently my attention has really gone to Mark Romanek. His next film, Never Let Me Go, will come out soon, and it's going to be very interesting to see its reception.


If, by some nightmare scenario, you couldn’t be a filmmaker, what would you do?
Assuming the other modes of performance are out along with filmmaking- I think my next inclination would be to gravitate towards danger. I'd find an excuse to jump out of helicopters for a living. Not because I'm a thrill seeker, but that could just as well help exhaust that mounting energy that always needs to get out.


What is the future of cinema?
Not 3D I hope. I look forward to that dying down again. I think the direction we've been going over the past twenty years is a good indicator. Less art, more franchising. In a way, this is a good thing, because the filmmakers who manage to burst through for their art will be able to write their own checks. There will just continue to be fewer of them. I would say everything is heading the way of the internet, but I certainly hope not. My hope is that, despite the instant gratification telecommunication cyber relations our culture is adopting, there will continue to be real hotshots who keep a distinction between cinema and movies.
Posted by Steven Boone at 2:23 AM

superb ,it really motivated me to narry on with my dream of becoming a film director

Mattson and I came into contact via SpidVid.com and while I did hear of the 'The Projectionist' in 2008, I hadn't seen it was largely unaware of who he was. Once we started communicating I hit the net to scope the guy out and was instantly a fan of his work and work ethics. He is a good choice for an aspiration. Very appropriate title for this blog segment.

I feel I should say, I absolutely love your website. Could tell me how I can subscribe with it. I invite you to see my post, I hope you will find interesting too.

Great questions, well answered matt! Will be sure to keep watching your work grow.