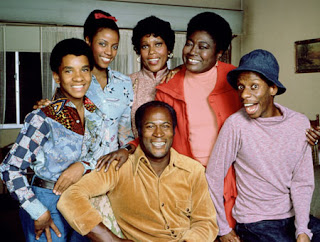 Still, Good Times left me with plenty of memories, from Thelma's lumpy oatmeal to Janet Jackson's Mae West imitation to Esther Rolle saying the title of this piece. I make fun of that line all the time, but I'll not deny just how effective and harrowing it was the first time I heard her say it. Kansas City Mack himself, John Amos, had been fired from his role as patriarch James Evans. Amos wound up on a show called Future Cop, which, if I recall correctly, was TERRIBLE. The producers dealt with his departure with utmost finality: Just as things were looking up for the downtrodden family, the show killed James Evans off. Rolle's Florida Evans, in response to reading the news in a telegram, screams out "DAMN! DAMN! DAMN!!!" It's a punchline now, but it was a punch in the gut in 1976.

According to Eric Monte, the co-creator of Good Times with The Jeffersons co-star Mike Evans, Norman Lear never wanted James Evans on the show in the first place. A strong Black male didn't work on sitcoms. "Get rid of the father," Lear would tell Monte every time he submitted the idea. Finally, Lear acquiesced, but the trade-off seemed to be to make J.J. Evans stupider. Since J.J. was the breakout star of Good Times, and not just amongst Whtie audiences (my cousin had a huge crush on Jimmie Walker), I suppose Norman Lear was right about strong Black men and sitcoms.

A few days ago, I learned two things about the creators of Good Times. First, Eric Monte met Norman Lear through Mike Evans, who asked Monte to write an All In The Family script centered around his character, Lionel Jefferson. Lear was looking for scripts, and Evans put his and Monte's names on the result and submitted it. That script introduced Weezy Jefferson and her then unseen husband George to the show. So, Monte basically created the two main characters on The Jeffersons.

The second thing I learned: Hollywood is now doing a big screen version of Good Times!

I brought this bad karma on myself. When Hollywood started making shitty movies out of beloved "regular" shows like The Flintstones, Bewitched, Wild Wild West, The Beverly Hillbillies and The Dukes of Hazzard, I laughed my ass off. Talking to a fellow critic friend of mine, I said "they'll never do that to beloved Black sitcoms!" My rationale: Hollywood aims for White audiences. "They won't go see a big-screen version of 227, even if Sondra Clark shows her boobs!" I continued. "Amen, neither. And The Jeffersons was already adapted into a play. So our sitcoms are safe!" 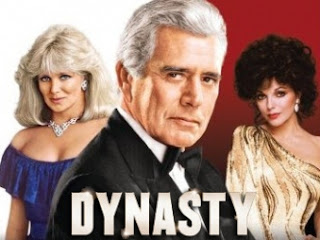 Red flags fly from every direction as far as this big screen version is concerned. The filmmakers plan to set the movie a decade earlier than the sitcom, so that the Evans clan is thrust into the Civil Rights Movement. I think this was done so the script would be easier to write (that is, easier to incorporate White characters into it). And rather than get Eric Monte to write the new screenplay (Mike Evans died in 2006), producer Scott Rudin hired Phil Johnston. Johnston wrote the entertaining Wreck-It Ralph. Here's a video of him. I'll bet he knows as much about the projects as I know about the Country Club. If Hollywood can hire him to write Good Times, none of y'all better say shit when I'm hired to pen the big screen version of Dynasty. And my version is going to be 2 hours of Alexis, Krystal, Sammy Jo and Dominique Devereaux slapping the SHIT out of each other. Just like the show was on TV!

Monte is listed as having an "associate producer" credit on the film. Maybe he'll have some say in the way his creations are depicted in 2013.

I suppose I should reserve judgment until I see the movie. But if I may make some predictions, I bet Bookman will be White, and so will Willona. J.J. will be even more ignorant, and James will die 20 minutes into the film. They won't even TOUCH the Black Jesus episode. And Octavia Spencer, who will probably be Florida, will say "FUCK!" instead of "DAMN! DAMN! DAMN!" We need that PG-13.

To close out, if the makers of the big screen Good Times need an updated theme song, allow me to offer one up, free of charge. Let it serve as my mea culpa if I'm completely wrong about this movie.

GOOD TIMES!
Any time Blacks get a movie!

GOOD TIMES!
Any time they're on the screen

GOOD TIMES!
Any time it's not Madea!
Packin' a heater!
Shootin' wife beaters!

Keepin' ahead of the White Folks!
Even if they wrote the script!

* Like you know what the fuck they're saying on that line in the original!
Posted by odienator at 12:37 AM

"Like you know what the fuck they're saying on that line in the original!"

Well according to Dave Chappelle, it's "hangin' in a chow line." I always thought it was "hangin' out and jivin'" but what do I know? For what it's worth, I'd love to see your Dynasty. It'd make a great double-feature with Bob Saget's R-rated Full House: The Motion Picture.

Funny thing. My favorite random memory involving the Good Times theme song might be Jack Black's "where the fuck did THAT just come from?" rendition in School of Rock:

Dersu, Dave Chappelle makes a convincing case. It DOES sound like "hangin' in a chow line!" but that wouldn't make any sense. Alan and Marilyn Bergman said it was "hangin' in and jivin'," and I suppose they're right as they wrote the song. I've always found the Good Times theme to be, as I said in my Jeffersons piece, a "hard as fuck to sing wallow in misery."

As an aside, I used to think the end credits song went "Just lookin' out of the window, watching the assholes grow..."

Scott, I completely forgot about that. I keep wondering if they're going to get this guy to play J.J.