Crazy Talk Part I: Malcolm X vs. Cliffs Notes Cinema (or How Black Folks Could Save Movie Culture) 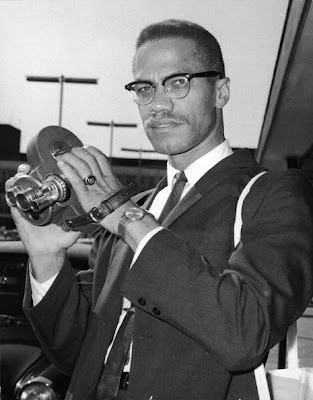 My big problem as a film critic has been getting past the fact that in mainstream commercial cinema, the visual language has broken down to the level of advertising. Jonathan Rosenbaum predicted it in 1990, and it has come to pass: classical visual storytelling is dead-- not of natural causes but from asphyxiation in the prime of its life. The big movies--high, low or middlebrow-- all flow in the manner of TV commercials. Individual shots and edits mean very little anymore. Cliffs Notes cinema.

Nobody seems to give a damn. Critics just go on reviewing the new releases as if they weren't hobbled by this insufficient base language-- debating the merits of this or that scenario, performance, production value when the flow of images, the very lifeblood of any movie, has become uniformly, insipidly manic. In a pan of the film Inception, a model of bloodless Cliffs Notes montage, A.O. Scott sez:

"The unconscious, as Freud (and Hitchcock, and a lot of other great filmmakers) knew, is a supremely unruly place, a maze of inadmissible desires, scrambled secrets, jokes and fears. If Mr. Nolan can’t quite reach this place, that may be because his access is blocked by the very medium he deploys with such skill."

Okay, so Scott mentions Hitchcock, a filmmaker who actually did deploy the medium "with such skill" to get at those allegedly blocked impulses, while suggesting that said medium is insufficient for such aims. Zoinks. Scott acquits cinema with a veiled insult while damning Nolan, an exemplar of the current filing cabinet style of montage, with high praise. This is because, among critics, film editing is the least understood and last considered culprit vis a vis why movies have become so arrhythmic and downright ascetic in effect. And I'm talking about the ones that indulge sex and violence most especially.

Or a family dining with a murderer.

Or a man helping a woman brush the sand off her clothes and skin.

Or two friends visiting a grave when one of them is himself facing death.

Or a sensitive young actor listening to people ridicule him behind his back.

Scott focused on Nolan's lack of imagination, but that deficiency never posed much of problem on his early triumphs, Following and Memento, which were made when the dominant film culture was still in transition from a moviemaking outfit to a sweatshop for feature-length trailers. Go back and watch Memento now. You might be shocked at how much Nolan allows moments to accrue a certain weight and resonance in screen time; how relatively quiet the soundtrack; how close to actual, memorable feeling you get. Memento is a very spare film of nondescript interiors, back alleys, trailer parks, parking structures and storage sheds, but in the way it moves through time and space (with great sensitivity to the subjective experience of one character) it is the most sensual, groovin' flick of Nolan's career.

Sensuality in cinema is a fourth dimension that has little to do with what we actually, concretely see but what we feel in the moment; over time. We get to those feelings by the way a filmmaker moves our eyes around the frame and transitions from the universe of one shot to the universe of the next.

The audience that Cliffs Notes cinema groomed last decade is now too antsy for all that. Memento, released today, would be regarded as slow and too indulgent of character over plot. Yes, Memento. Yes, plot. Like cigarette addicts, Ho'wood's current clientele habitually crave plot delivered at a rapid clip from the lips of characters too busy to let you into their lives-- except where the scenario calls for some sort of emoting. These moments of pantomimed humanity are like the demographic pandering we expect from corporate billboards. Like those junk food or oil companies that  promote good health and clean living, they are a false front.

And just as a mask with no eye holes permits no window to the wearer's soul, these facades deplete the viewer's emotional intelligence, resulting in a more mercenary, bottom-line, smug, frivolous culture. Close ups everywhere, but very few faces.

Which brings me to my crackpot theory, that Black folks might just be the best equipped among us to save the movies, and pop culture at large.

It took Malcolm X to awaken us to our own ignorance and unconscious suffering.

Who are you?
You don’t know!
Don’t tell me Negro, that’s nothin.’
What were you before the white man named you a Negro?
And where were you?
And what did you have?
What was yours?
What language did you speak then?
What was your name?

These are the questions to ask filmmakers, critics, cineastes and regular moviegoers of a certain age. What kind of cinema did you have? Where did it go? How did you lose it? Who took it?

And how can you get it back?

You're onto something here, Boone. This notion is book-worthy, but I think you already know that. I'm REALLY looking forward to Part II!

That value that can be gained from asking questions--the right ones, natch--can't be underestimated. It removes the notion of Right and Wrong and replaces it with a constant pursuit.

Excellent diagnosis of the cancer currently eating away at cinema. No one -- not even "big" directors -- seems to know how to even visually tell a story anymore. No scenes, just a collection of moments aimed at the couch potato with his finger on the fast forward button. An entire story told in vertigo-inducing close-ups for the 36" TV's of the home video/DVD market. The Simpson/Bruckheimer '80s live on.