The All Cullud Musical Daily Double: Cabin in the Sky

Today and tomorrow Black History Mumf is all singing, all dancing, and with an all cullud cast! So get ready to jitterbug and make sure your dice are loaded. The management wishes to inform you that it is aware that the proper spelling of "colored" is "cullud," and also asks: Please, no drooling on Lena Horne. 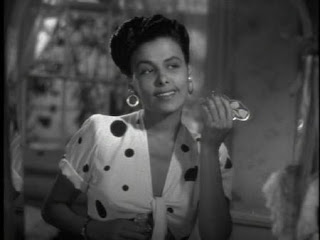 But first, a commercial about what it takes to be in an all-cullud musical.

Ladies, is you religious? Do you pray to de Lawd for ev'thang? Does you loves yo' man so much dat he can cheat on ya, break ya hawt and ev'thang, yet you sticks by him 'cuz you just can't lovin' dat man o'yours? Are you quicka ta get on yo' knees than a $20 ho, 'cept you be prayin'? Den you must be dark-skinded! But maybe you IS dat $20 ho, slinkin' round stealin' dat prayin' woman's man? If so, den you must be light-skinded! If you'se meet any o' dis criteria, you can be in an all cullud musical!

The first big cullud musical of note was King Vidor's 1929 talkie, Hallelujah. It starred the gorgeous (and light-skinned) Nina Mae McKinney as a woman who steals a preacher man from his family and his betrothed. She causes him no end of trouble, leading to the death of his brother and his own incarceration on a chain gang. McKinney is stunning to look at and talented to boot, but Hollywood really didn't know what to do with her, so she never became a big star.

Next was 1936's The Green Pastures, a movie based on the Pulitzer Prize winning play by Marc Connelly. Though it has music in the form of gospel numbers, it's not technically a musical. Instead, it's a retelling of some Old Testament stories as seen through the eyes of a smiling Black girl. I don't know what the hell the Pulitzer committee was smoking when they gave this the Pulitzer; its strengths are the multiple performances by Rex Ingram and how it manages to get away with presenting the Father of Creation as a big, grammatically incorrect Black man; its writing is atrocious. Those Black grandmothers with their mantle pictures of Jesus that looked like Nick Ashford rejoiced: "I tol' y'all Jesus was Black!" Rex Ingram plays de Lawd, and every time I refer to God in my writing, I call Him "de Lawd" to honor Ingram's performance.

1943 gave us a double whammy of cullud musicals, and these two make up the Daily Double. I'll talk about Fox's Stormy Weather tomorrow; today's entry is about MGM's Cabin in the Sky. 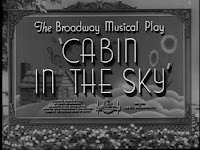 Like Green Pastures, Cabin in the Sky started out as a Broadway musical before finding its way to the screen. It was MGM musical master Vincente Minnelli's debut feature, and one can see the genesis of some of his trademarks in this feature. Cabin tells a very stereotypical story, but its music and performances keep it from becoming intolerable. It's easy to make fun of it--and I will--but not so easy to forget musically.

Ethel Waters plays Petunia, a devout servant of de Lawd who talks to Him so many times a day 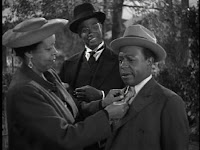 that He's probably tired of her praying ass. Petunia is married to Little Joe (Eddie "Rochester" Anderson) , a ne'er do well who, at the film's opening, has given up craps and booze to return to the fold at Petunia's church. It's such a big deal that the entire town gossips about it. Little Joe is such a good get for de Lawd that the preacher (Kenneth Spencer) stops by Petunia's to ensure Little Joe's presence at church. Petunia's constant praying for Little Joe stereotypically shows her love for him, but I was far more convinced by a throwaway scene where Minnelli's camera observes her tying Joe's tie. 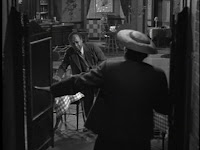 Joe goes to church, but is soon tempted by the promise of a big score at a craps game. As Petunia sits in a pew with her best friend Butterfly McQueen, Little Joe is "coerced" into leaving salvation for a return to sin. He's conveniently shot soonafter. Petunia, who has Spidey Sense when it comes to knowing something's wrong with her man, runs down to the gambling spot to find Little Joe mortally wounded. The way Minnelli uses a rapidly opening and closing saloon door to reveal this to her is a very nice touch.

Little Joe dies, and as Petunia prays for his soul, said soul sits on the bed and converses with the son of the Devil. Lucifer Jr. Little Joe was such a good get for de Lawd because he was a more 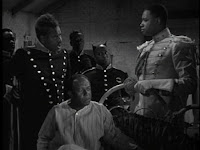 appropriate one for the Devil. Satan sends Lucifer Jr., up to earth to collect his due. Junior is played by de Lawd Hisself, Rex Ingram! Ingram clearly relishes the role, laughing in that rich laugh of his, the one that gave the genie such character in The Thief of Bagdad. When he hears Petunia praying, he says "dat's some mighty fine prayin'." Heaven agrees, and sends The General (Kenneth Spencer again) to intervene. Based on Petunia's prayin', Little Joe is given six months to change the error of his ways. Lucifer Jr. calls it "dirty pool," but the upside is that Joe won't remember how much trouble his soul was in once it returns to his body. He's going to have to reform without the knowledge that he's doomed to die in 6 months. 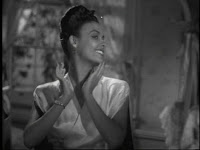 Heaven has Petunia to help keep Little Joe on track, but that ol' debbil Satan has an ace in the hole too, in the guise of Waters' songstress rival, Lena Horne. Horne plays Georgia Brown and man, is she sweet! With her midriff exposed and her sashaying hips, Georgia Brown is pure, unadulterated, carbon-based temptation. Little Joe has messed with her before, and Petunia knows about it. She loves him anyway, even singing the Oscar nominated "Happiness is a Thing Called Joe" to him. Waters is in fine voice, and she uses it well throughout the film.

When Lucifer Jr. sends Georgia Brown to Joe's house to inform him he's won a Hell-sponsored sweepstakes, Petunia discovers them alone. Her response, of course, is to pray to de Lawd. This 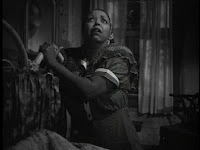 woman is so overJesused that she prays for Little Joe to LOSE every time he goes gambling. With friends like that...

After praying, de Lawd grants Petunia the common sense to throw Joe out. This leads him even further down the path to damnation. He becomes a big shot at the same club where he got a big shot. With Georgia Brown on his arm, Little Joe is the talk of the town. Meanwhile, Petunia decides she still loves Joe and goes down to the club, seemingly forsaking her religious beliefs, to win him back. Throughout the entire picture, Waters has looked like a ragamuffin, but when she shows up at the club, she's all glamour. 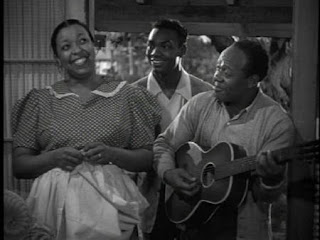 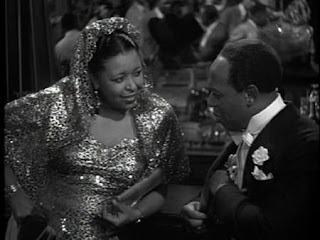 After!
In his book, Toms, Coons, Mulattoes, Mammies and Bucks, Donald Bogle states that Ethel Waters and Lena Horne did not get along during filming, and that Waters threw temper tantrums over Horne's casting. It shows in Cabin in the Sky (think Jennifer Hudson vs. Beyonce). In one scene it looks like Waters is about to slap the Black off Horne, and I don't think it was acting. Still, both Waters and Horne sing some great numbers, Bubbles from Buck and Bubbles does a great tap number and Duke Ellington even shows up to remind us why Stevie Wonder wrote that song about him. As for Rochester, he and Horne sing Dat Ole Debbil Consequence. If I never hear him sing again, I'll be fine. 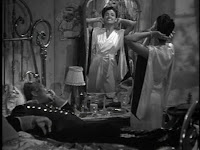 A note about Horne: MGM was fond of cutting her out of the movies she appeared in when they played in the South. As a result, she was rarely cast in a role integral to the movies she did for MGM. As I pointed out in my take on Jezebel, I highly resented and continue to resent how Hollywood catered and kowtowed to the South back then--were they the only fuckers who went to movies? You would think MGM couldn't cut Horne out of Cabin in the Sky, with her being Lucifer Jr's. main plot device, but they still managed to cut some of her performance out. See your homework assignment for more details. 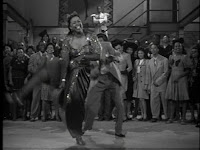 Both Ethel Waters and Lena Horne sing during the big club dance number at the climax of Cabin in The Sky, and Waters does a dance number that proves that her thickness didn't keep her from being limber. Her leg kicks and dance moves are a joy to watch. Waters, ironically enough, made the song Stormy Weather popular but doesn't appear in that movie, and Horne attempts to steal her thunder not once but twice in that picture. Tune in tomorrow.

Warners slaps its "sorry we depicted you niggers as stereotypes" disclaimer at the beginning of the DVD of Cabin in the Sky (it did this for The Green Pastures as well). It's got stereotypes, but it's not as bad as most movies of the time. Tomorrow's feature has a number bound to raise eyebrows however. 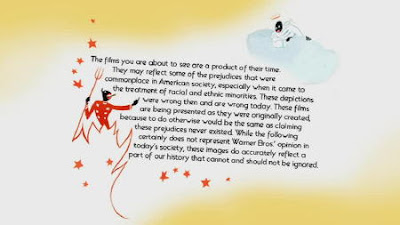 Rent MGM's That's Entertainment III to hear Lena Horne tell you how badly she was treated by MGM. She'll also show you the aforementioned cut pieces of her Cabin in the Sky performance. It's worth it. She's singing a song in a bubble bath.
Posted by odienator at 10:56 AM