Imagery Saturdays: The Slap Heard 'Round The World

In The Heat of the Night's plot involves a murder investigation conducted by Virgil Tibbs (Sidney Poitier), a Black Philadelphia homicide detective, and Sgt. Gillespie (Rod Steiger), the White sheriff of the racist town of Sparta, Mississippi. Tibbs' involvement comes at the costly mistake of White police officers who, discovering someone who easily fit the description of a person on whom they could pin the murder, arrest him. When a good amount of money is found on Tibbs, the cops think they have their man. Tibbs tells Gillespie he's a police officer in Philadelphia, and after Gillespie confirms it, he has no cause to keep Tibbs in custody. However, after seeing just how good Tibbs is at homicide investigations, Gillespie realizes he needs someone of Tibbs' talent to help him, color be damned. Gillespie strokes Tibbs' ego by zeroing in on that one thing that I'm sure someone in Tibbs' position wanted to do. He tells him "You're so damn smart! You're smarter than any white man. You're just going to stay here and show us all. You got such a big head that you could never live with yourself unless you could put us all to shame." Tibbs certainly has an ego, and after his treatment, he surely wants to make these racist rednecks look like dumbasses.

The trail leads the duo to Mr. Endicott (Larry Gates), the richest man in Sparta. Endicott's business is cotton, and director Norman Jewison and editor Hal Ashby (who won the Oscar for this) intercut scenes of Black laborers picking cotton with the suit-wearing Tibbs riding through the field in Gillespie's cruiser. One shot even pushes the camera into a cotton processing machine. 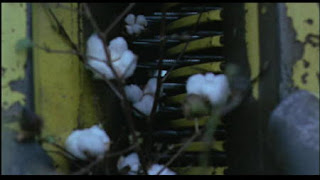 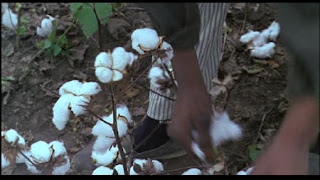 "Nunna that for you, eh, Tibbs?" asks Gillespie.

ITHOTN does this often. The film bumps ideas, imagery and dialogue against Tibbs' character, seeing the film the way he'd see it. Sometimes it makes a comparison, and others it shows similarities. Despite the racial aspects, Virgil Tibbs is a typical fish out of water character reacting to things around him. He's the best dressed character in the film, and the handsomest, and the smartest. Everything about him stands out. His color is just icing on the cake.

When they arrive at Endicott's mansion, the man's take on racial equality is right out there on his lawn. 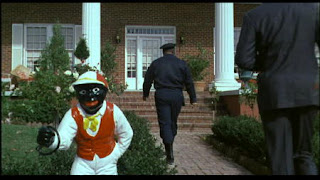 I wish I had been in the movie theater audience in 1967 when this next scene went down. Gillespie introduces Tibbs to Endicott. "This is Virgil," says Gillespie. Endicott addresses him as Mr. Tibbs, something I could never buy, and treats him with fake Southern "manners." Endicott asks if they would like something to drink, and while Gillespie declines, Tibbs asks for "something soft." Endicott sends his Black servant out of the greenhouse to get some lemonade. Tibbs starts to butter Endicott up, asking about the orchids he's growing. Endicott patronizes Tibbs, asking him if he knows much about orchids. Tibbs lies and says no. Endicott continues to patronize Tibbs, taking him to see some of more admirable orchids. Using the same overly polite tone of voice, Endicott compares an orchid species he's growing to Black people.

"You should prefer [that species]. Do you know why?" (Tibbs asks him to explain.) "Because, like the nigra, they need care, and feedin', and cultivatin' and that takes time. That's something you just can't make some people understand." 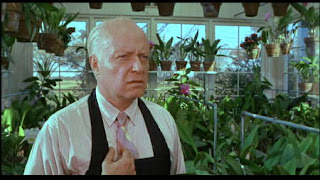 "You came up here to question me?!"
Because the "nigra orchid" grows in the same kind of soil that Tibbs found in the victim's car, he asks Endicott if the victim had been in the greenhouse the night before. Endicott responds by slapping Tibbs across the face. 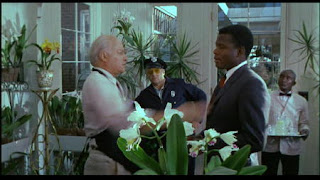 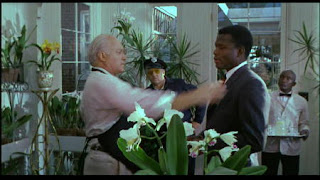 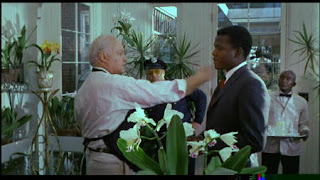 Tibbs responds by returning the favor. 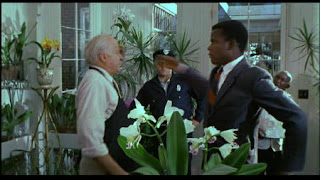 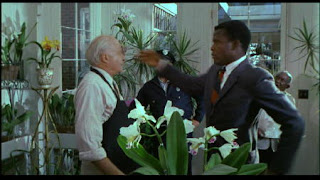 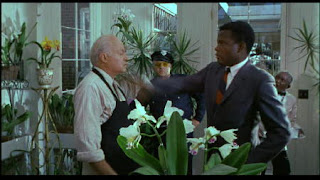 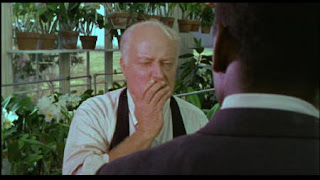 Owww shit! The taste in my mouth is GONE! Oh no he didn't!
I read somewhere (I think Poitier or Jewison said this) that when Tibbs slapped Endicott, Black people in the theater went berserk. They jumped out of their seats and applauded for Sidney. This scene had never been done before. In A Patch of Blue, Poitier slapped Shelley Winters, but Shelley was so mean to her blind daughter that it wasn't so shocking; it could be justified by the audience because (forgive me, Shelley--I don't personally believe this) she was a woman and not in any position of power, symbolic or otherwise. Slapping Endicott, a rich, powerful White MAN, was an absolute no-no. Poitier wasn't just hitting another actor, he was slapping the shit out of an entire way of thinking, one that was so prevalent back then that the filmmakers couldn't shoot the movie on location for fear of attack.

Endicott asks Gillespie "what are you gonna do about it?" Rod Steiger plays the scene with the right note of outrage and secret "you go boy!" It's scenes like this that got him his Oscar, along with the fact Jewison made him chew gum the entire movie to keep his teeth out of the scenery. Gillespie dislikes Endicott too, and though Steiger looks terrified, read his eyes. 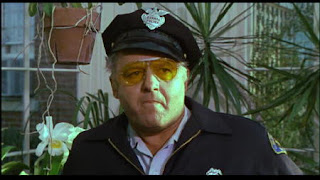 "I don't know," says Gillespie.
Endicott tells Tibbs "there was a time I could have had you shot." It's another line I don't really buy, as Endicott could still have had Tibbs shot that day, and the Sparta police department would have had no choice to cover it up. 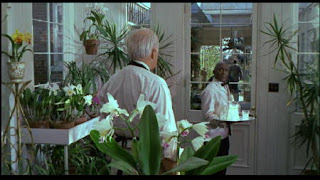 Schoolhouse Rock has that song that goes "It was the Shot Heard 'Round the World. It was the start of the revolution!" (Why no gangsta rapper has sampled that line yet is beyond me.) In the Heat of the Night gave us the Slap Heard 'Round The World. 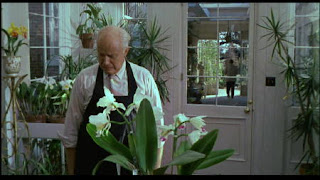 Is that my lip on the ground there?
Your homework assignment:

Slap the shit out of your boss. JUST KIDDING! Get your fix of Sidney by renting No Way Out, A Patch of Blue, and In The Heat of the Night. Toss in Lilies of the Field if you're into nuns, but be warned. It's not that great a movie.
Posted by odienator at 12:00 PM

This was a particularly good read. Along with Jim's opening shots project, Black History Mumf is my other favourite blogosphere marathon.

I'll have to stop by your site later to see how you did in your Oscar picks. I lost the pool by one.

I saw this on Turner Classic Movies a few months ago, and I seem to remember Robert Osbourne saying that Poitier's slap was not in the script, but the actor lobbied for it because that's how he himself would have reacted.

"They call me Mr. Tibbs" is one of my favorite line deliveries of any film. On paper it looks silly, but Poitier sells it by filling it with the perfect amount of confidence and disdain.

Congratulations on this series, very ambitious and informative.