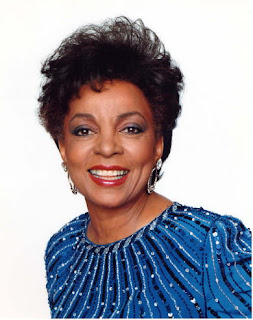 Ruby Dee may or may not win the Best Supporting Actress Oscar tonight. My money's on her, but I wish she had more screen time. I'm not sure I'd vote for her performance if I had an Oscar ballot, but I've no problem with her nomination. Granted, it only takes one scene to get a Best Supporting Actress nomination (see Tess Harper), and that same amount of scenes (ask Beatrice Straight and Judi Dench) to win. Dee's scene with Denzel Washington is excellent, but I wanted more. She is thoroughly convincing as the one person who could stand up to American Gangster Frank Lucas, and her Mama-slap of Denzel is now in the upper echelon of movie slaps, but the movie needed more Mama Lucas.

Had Dee one more scene in the movie, her win would be as locked as some of the other Oscar nominations. She's a living legend, and one rationale for her possible win is that the Academy has honored more Black men than women with the statuette:

However, the Academy doesn't operate the way it used to when it comes to giving Oscars for a body of work, or because you're old, or because it's owed for something else. Gone are the days of Don Ameche's win, Bette Davis' win or Pacino's win. Frontrunner Lauren Bacall famously lost to Juliette Binoche, Gloria Stuart's hope of winning sank like the Titanic, and most recently, Peter O'Toole left the Oscars with his 8th loss.

However, Dee is a slightly different case. She's been around forever but her win would be an opportunity for new Hollywood to acknowledge a Black trooper from the old guard. She's one half of an acting duo whose humanitarian efforts and contributions to Blacks speak volumes. In some ways, honoring Dee would be an even bigger symbolic achievement than giving that Best Actress award to Halle Berry. Berry's acceptance speech was infinitely better than her performance. Ms. Berry said that her win was for people like Dorothy Dandridge (whom she superbly played in that fantastic HBO movie), and I can't deny that. But Dee was one of Dandridge's contemporaries, working in Hollywood at the same time. Sidney Poitier (co-star of both Dandridge and Dee) is the only other person from that period who has an Oscar, and like Dee if she wins tonight, he got it for a performance that was good, but through no fault of the actor was missing its full potential.

Like I said, my money in the Oscar pool is on Dee. She would give an entertaining speech that would get Bill Conti's ass shot if he played her off. Plus, I love hearing this woman talk. She has such an honorable way of talking, and not in that haughty way that irritates me whenever I'm listening to Maya Angelou. (Bad Odienator! Bad Odienator!!) I could listen to Ruby Dee read me the phone book, just like I could listen to Sam Elliott read it to me. Hell, let's get Dee and Elliott together with the Yellow Pages...

My two favorite Dee performances are in a TV movie and a feature film. The TV movie is an adaptation of Having Our Say, the autobiographical novel by Sadie and Bessie Delany. Diahann Carroll plays opposite Dee, and like the novel, it's a series of stories being told by the sisters themselves. When I read the novel, I could hear Ruby Dee in my head, so it was perfect casting. If you aren't hip to the Delany Sisters, please get a copy of their book and this movie. These are some inspiring Black women, sharp and funny even in old age, and their lives, which they reveal via the typical Black historical tradition of oral storytelling, are nothing short of fascinating.

Spike Lee cast Dee opposite her husband Ossie Davis twice, in Jungle Fever and the other movie I'd choose, Do The Right Thing. In DTRT, Dee's character is somewhat an enigma for most of the film. To Black folks, she's instantly recognizable as that bitter old lady we had in the hood whose eyes were everywhere and whose mouth was unforgiving. Dee is so mean to Davis' drunken Da Mayor character, and while it's fun to see her chew out her real-life husband, I felt sorry for him. He's the only person in the entire picture whom I felt had some wisdom, and we don't know why she hates him so much. Dee seems to have no compassion until the riot sequence. This woman knows how to freak out (she'd do similar work in Jungle Fever opposite our favorite Yeller). She grabs you and drags you into the center of the horror, using one word to pull out your insides.

I ran this Oscar exchange program once, and if Dee wins tonight, I'd like to see her at my counter turning her Oscar in for the one she should have gotten for Do The Right Thing.

We'll know her fate in a few hours. Good luck to all.
Posted by odienator at 3:01 PM