It's Saturday Morning in da 'hood, and the question of the day is: Where on TV can you see Black superheroes, Black super-Fro's, Black princes with bling, Black boys taking public transportation, and cute little Black girls with pigtails tied with bright red ribbons? If you said Fat Albert, look in the mirror and go "BAAAAAANT!!! WRONG!"

You can see all this, and more, on Schoolhouse Rock.

Schoolhouse Rock was a staple of our Saturday morning TV viewing, if only because it was a lot

more fun to watch than In The News. ABC's animated series taught math, science, grammar and history in 3 minute musical interludes, and no, Black History wasn't included. But Black people sure were. There's a difference between being multi-culti and being ghetto. Schoolhouse Rock was ghetto.

I would be a liar if I said Schoolhouse Rock didn't save my ass on at least one occasion at school. In 5th grade, we had to write the preamble to the Constitution as part of a history test. Luckily for me, I had seen a million times the Schoolhouse Rock cartoon on the Preamble where, somehow, they managed to not only sing a law document but to make it catchy as well. Let's see Patti Labelle try that. ("Gichy-Gichy-ya-ya-da-da! Preamble Constitution! Vous le vous cocher avec moi!" I would have failed my ass off.) I sat there, singing the Preamble song over and over in my head until I'd gotten it all down. I recall the teacher asking me if I were praying because my lips were moving. I said yes, because I thought using Schoolhouse Rock constituted cheating.

But I digress. Where was I? Oh yes: Schoolhouse Rock was ghetto. 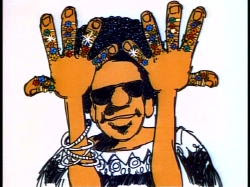 Let's start with my favorite Grammar Rock cartoon as a kid. Most people like Conjunction Junction, with its drunk-sounding conductor "hooking up words and phrases and clauses." I was never a big fan of that one. I preferred the one about verbs, presumably because the lyrics sounded dirty. "I get my THANNNG in action!" the male voice in the song tells us, followed by an all-girl chorus screaming "VERB! THAT'S WHAT'S HAPPENIN'!" We meet our young protagonist, a boy buying a ticket to a movie called VERB. He stands on line at the ghetto theater, gets a ticket, pays a quarter for popcorn, and steals some kid's seat just in time for the movie to start. And from the looks of things, it's a Wesley Snipes picture. 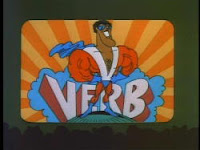 As the cartoon progresses, we see VERB save the day using past, present, and future tense. He flies through the air, plays baseball, saves our protagonist from falling out of the sky, and shows us what a baadassss macho grammatical term he is. Look at the man's chest hair, for God's sake. And he had a cape years before Lando Calrissian. Along the way, Wesley shoots for that Oscar: 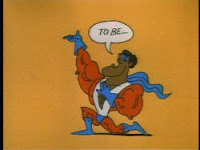 I'm sure I'm giving the Schoolhouse Rock folks a little too much credit here, but it's subversive as hell that the Black superhero is spouting the one verb we're not supposed to know how to conjugate.

After VERB saves the day and teaches us all about his power, the movie-going little boy runs home to the comforting arms of his Black Mama. 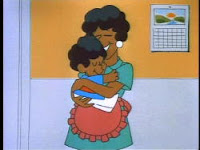 All this is set to what sounds like Blaxploitation music. Take out the words, and you could set a Cadillac chase scene to it.

Over on the Multiplication Rock side, we meet a subway riding kid (you know he's taking the A train) 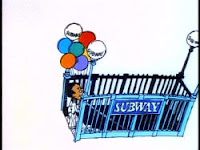 This kid appears in the I Got Six cartoon, which explains why he's taking six balloons into the subway. The cartoon ends before he gets jacked for them, but before it does, Schoolhouse Rock presents its strongest "I'm so hood" argument yet. As the singer goes through the six times tables, some of the things he uses to count with are rather interesting. If you counted the rings on the bruva's hands above, you're obsessive-compulsive. But you're right if you thought he was the 6 x 10 example. They use him a fair bit in the cartoon. He's a prince, and as his money picture earlier in this piece depicts, he is livin' large. He's also quite busy. Real busy. 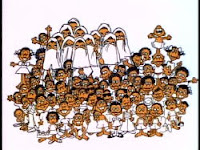 You figure out what six times table that is. All I can say is damn.
Flip that six upside down and you get my all time favorite Schoolhouse Rock cartoon, a wonderfully bluesy song about how the nine times tables will fuck up your life unless you have the appropriate hustle. Our stand-in is a cute little white mouse who gets used as a cue ball in a pool game being shot by a cigar-smoking, fedora wearing fat cat: 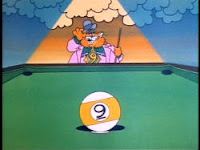 One of the things I love about the animation on Schoolhouse Rock, besides its cheapness, is its occasional attention to detail. This is one smoky pool hall, and the entire cartoon has those clouds of gray smoke hovering above. And, unless my eyes are deceiving me, they crib a shot directly from The Hustler: 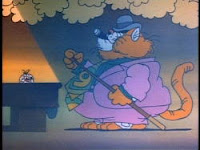 With the way Minnesota Cats is dressed, you know this game is taking place down at Ray-Ray's pool hall on Martin Luther King Dr.

Over at Science Rock, we learn about how the human body processes food from a pigtailed little girl with red ribbons in her hair. Despite our heroine's ethnicity, the cartoon seemed to veer away from anything overtly or stereotypically Black. The girl passes a table of food about three or four times before stopping to get something: 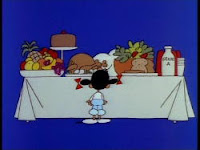 What do you think she'll choose to eat, boys and girls? 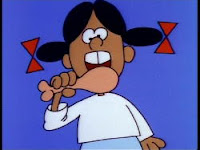 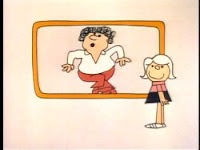 Yes, that Chubby Checker, the guy who sang The Twist, Let's Twist Again, Let's Twist Some More, Twistin' Wit' Yo' Mama, etc. If ONLY they had used Michael Jackson's name in the lyrics to the noun song instead of Chubby Checker! Not only would Schoolhouse Rock still be massively entertaining, it would have also been one hell of a soothsayer. Talk about your missed opportunities.

Go play pool. And not at Dave & Buster's either. At a real pool hall. And also, write your 5 times tables 10 times.
Posted by odienator at 2:31 AM

it's subversive as hell that the Black superhero is spouting the one verb we're not supposed to know how to conjugate.

God that was funny. Odie, I also about fell out of my chair on the picture of the girl eating the chicken. And I remember as a kid thinking something wasn't right about that Chubby Checker picture. Great piece...thanks for the memories.

In 7th (or was it 8th?) grade social studies, we had the Preamble test. So many of us were humming the Schoolhouse Rock tune it threatened to turn into a sing-a-long. Nothing wrong with that, either -- if music helps you to memorize something that would otherwise be impossible, crank up the tunes.

My kids have Schoolhouse Rock on DVD. They love it.

I also about fell out of my chair on the picture of the girl eating the chicken.

Ross, for me, that is the biggest laugh that will appear during BHM @ BMV. Every single time I come to this post, I laugh when I see it. And I almost didn't include it. I had completely forgotten about that Science Rock cartoon. I had written this piece already without that part. I was watching the "Electricity! E-LEC-TRI-CITY!" one on the DVD and the Body Machine cartoon followed it. It seemed so innocent and cute, and then right at the end, God blessed me with that indelible image.

Actually, there's an even better image of her eating the chicken while doing a hula hoop (it closes the cartoon). The image I chose instead was for comedic timing purposes. I guess it worked.

Joan, everyone I've talked to has said they used Schoolhouse Rock to write the Preamble in school. We'd better be quiet; Disney might ask us for money!

Good grief! You brought back a lot of memories.

I have to chime in with Ross above and agree. Even when I was kid I thought something was way wrong with the School House Rock version of Chubby Checker. My parents actually had a Chubby Checker record so I knew what the guy really looked like and it confused the hell out of me.

I have to disagree with one thing: Conjunction Junction was the shit. It was one of the most unnecessary songs in the Schoolhouse canon (who didn't know how to "hook up words"?) but the music was addictive. I think. It's been at least 20 years.

Boone: I have to disagree with one thing: Conjunction Junction was the shit.

I always thought the conductor sounded like a wino, and the smarmy horn music sounded like it belonged in a whorehouse elevator. Come to think of it, why don't I like that one more?!

Conjunction Junction
Are you drunk, son?
Pukin' up beer and whiskey and ripple.

The music's great, and I think the songwriting should be commended as well. I got a kick out of watching the Schoolhouse Rock documentary on the DVD. If I had had time to watch it again before this piece, I certainly would have commented more on the music side. They've stood the test of time.

Hey! Thanks for the props for one of my favorite shows. I bought all the video cassettes for the Schoolhouse Rock series as soon as I knew I was pregnant with my first kid, and now my 13 and 14 years old boys, unlike their peers, are as well versed as our generation was with all that ghettolicious learning goodness.

oh gosh ray rays pool hall down on martin luter king dr! thats funny.i sung the preamble song in 2nd grade for the whole school! i dont know how i can remeber that...