A Few Words On Whitney 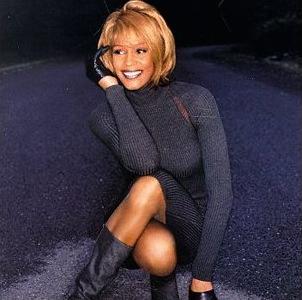 Man, this is turning out to be one messed up February.

Last year’s Mumf got a little heavier than I anticipated, so I wanted to add a little more balance this year. Fate appears to have other ideas. On February 1st, we lost Don Cornelius, and yesterday, we lost Whitney Houston. These things come in threes, that is, if you  are superstitious. I recall in 2008, Bernie Mac and Issac Hayes died in August, and Rudy Ray Moore two months later. With Don and Whitney #1 and #2 respectively, will I be back here with another unscheduled entry before the Mumf is out?

Allow me a few words on Whitney.

I fully cop to making Whitney jokes in the past—you’ll find some of them in this series. But I’d never joke about her singing. I always thought she was a fantastic singer whose musical pedigree was untouchable. But it took her third album, I’m Your Baby Tonight, to finally pull me into the fold. I liked a few songs off her first two albums, but I thought most of them sounded the same. I’m Your Baby Tonight was the first solo song of hers that I couldn’t stop listening to, so I dropped the ducats for the cassette. I still have this cassette.

I am in love with her first song, a duet with Teddy Pendergrass called Hold Me. Written by one of my favorite lyricists, Linda Creed, Hold Me felt like the old guard passing the balladeer baton to the new guard. It also beautifully illustrated how effective a restrained Houston could be. Both she and Pendergrass could yelp and shout with the best of the church belters, but they pitch this song so delicately. Houston’s phrasing is impeccable here as well.  Of all the songs I listened to after I heard of Houston’s death, this is the one that made me truly sad. (Houston also covered Creed's magnum opus.)

Her version of The Star Spangled Banner is as iconic as Hendrix’s, It’s so inspirational, Francis Scott Key should thank her in the afterlife. Her duet with Mariah Carey, the Oscar winning When You Believe, is a fantastic piece of divatude tempered by a respect for the religious material. And while millions of people adore I Will Always Love You, I can guarantee it’ll be on my radio when I am burning in Hell. As far as The Bodyguard soundtrack was concerned, I was more of a I Have Nothing kinda guy.

Speaking of The Bodyguard, I didn’t have high hopes for  Houston’s acting career after seeing it. I gave the film an F, calling it preposterous. Houston shut me up with her work in Waiting to Exhale and The Preacher’s Wife. In the former, she holds her own against more seasoned actresses like Angela Bassett and Loretta Devine. I liked Terry McMillan’s book, and Houston brings her character to credible life from the page. Houston doesn’t sing in Exhale, at least not on the screen. The ridiculous (though catchy) Babyface song she sings on the soundtrack (Exhale (Shoop Shoop)) plays in the background of one scene.

Houston does sing in Penny Marshall’s The Preacher’s Wife, a film that is much better than its reputation. I’ve never understood the bad rep it gets. It’s a good movie, a sweet-natured remake of The Bishop’s Wife. Denzel Washington can’t do light comedy to save his life, but something about Houston softens him. She brings out a bubbly effervescence in him (remember them ice skating?) while giving an excellent performance. Washington is playing a role originated by Cary Grant, and Houston brings out a bit of a similar, goofy likability in Denzel.

The Preacher's Wife features the cinematic moment I will hold close to my heart when I think of Whitney Houston. Denzel takes her to a club she used to sing in before she married Courtney B. Vance. With some goading from her former piano player (played by Lionel Richie), Houston sings a heartfelt cover of The Four Tops’ I Believe In You  And Me. (Click that link to see the clip.) Her character proves that, despite her long absence from the stage, she could return anytime and be just as good. Houston's fans hoped that would also be true after she took a break from her stage work in the 2000’s. Sometimes it was, sometimes it wasn’t.

The cable news media, especially MSNBC, was disgusting in its coverage of the news of Houston’s demise. Every newscaster harped on Houston’s drug problems and her tumultuous marriage to the King of R & B. They mentioned it far more than her hits, her successes, or even her acting. In fact, if I didn’t know any better, I would have thought she was just some junkie, not someone who sold hundreds of millions of records and won 6 Grammys. Not once did any outlet consider playing a snippet from my favorite song of hers, the Wyclef Jean-written My Love Is Your Love. It was the first thing I thought of when my Mom called me to tell me Whitney Houston was dead:

“If I should die this very day
Don't cry, cause on earth we wasn't meant to stay
And no matter what the people say
I'll be waiting for you after the judgment day.”