(Editor's Note: OK, President's Day is over by 26 minutes, but I'm going to attribute this to our double feature anyway! See here for the first half!)

Something the Lord Made holds a special place in my heart, with its searing, haunting and beautiful take on Dr. Vivian Thomas’ accomplishments. It’s my second favorite HBO movie.  The cable channel has made some great movies in the past 30 years, so I had plenty to choose from when considering what my favorite HBO movie was. Barbarians at the Gate. And the Band Played On. A Lesson Before Dying. Wit. Introducing Dorothy Dandridge. Miss Evers’ Boys. The list goes on and on, and I’m sure I haven’t listed some of your favorites. But when I really thought about it, there was only one movie that could fill that number one spot. It says something about me that I’d choose a film about an unsavory type over Mos Def’s honorable doctor: I’m a nostalgic fool. So be it. 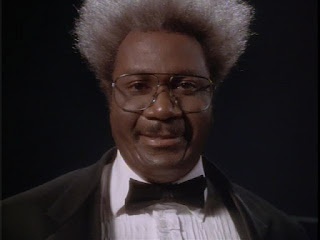 I grew up with Don King’s electrified ‘do on my TV. I asked my mother who he was, and she said the same thing she did when I asked who Nixon and Reverend Ike were. “He’s a crook,” she said. But not just any crook, as I’d later discover. Once he became a fight promoter, Don King was more Teflon than the Mafia. Nothing stuck to him, and on top of that, he was everywhere in boxing. The legend went that Don King always left the ring with the winner—even if he entered the ring with  someone else. Some of the winners he left with were Muhammad Ali, Larry Holmes, and Mike Tyson. In his heyday, he controlled 8 of the top 10 heavyweight boxers, and as King says in my favorite HBO movie, Don King: Only in America, “he who controls the heavyweights controls the world.” 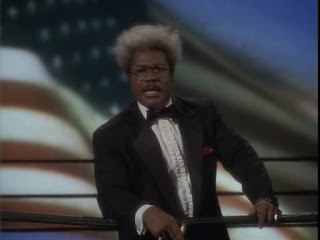 Don King: Only In America is based on the book Only in America: The Life and Crimes of Don King by Jack Newfield (which I have read). Screenwriter Kario Salem and director John Herzfeld allow the events presented to occasionally be interrupted or framed by comments from an onscreen Don King. On paper, it sounds disastrous, but the concept is seamlessly integrated into the film’s narrative fabric. Salem’s adaptation and the film itself both won Emmys, and its lead won a Golden Globe he famously tried to give to someone else. Don King certainly wouldn’t have done that! 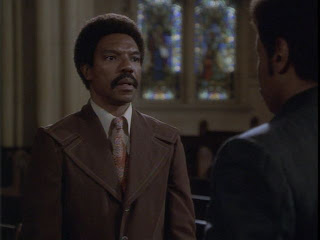 Herzfeld and company present a warts-and-all portrayal of Don King. The film opens in Cleveland in the 50’s, with a home invasion set to the O’Jays’ For the Love of Money. The crime results in King shooting one of the perpetrators who broke into his home to kill him. He gets off on that one and becomes a club owner with singer Lloyd Price. Price’s Personality (sung here by Price’s portrayer, Vondie Curtis-Hall) becomes sort of a theme song for Don King: Only In America. All of the fighters King manages during the course of the film can describe their careers with the word Price sings most in that song. (Hint: It’s not “Personality.” See for yourself.) 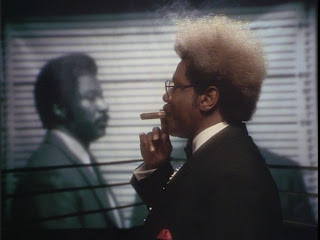 In 1966, after being humiliated by the mobster to whom he’s paying protection money, King storms into a local pool hall and beats to death a guy who owes him money. Don King: Only In America doesn’t flinch in presenting this crime—it’s brutal, violent and fatally rendered by Marsellus Wallace himself, Ving Rhames. Even as he’s being arrested, King makes it his business to stomp in the victim’s face. “I was defending myself,” says King, only to be followed by our “commentator” version of Don King. Meant to represent the current version of King, he tries to explain what we have just seen by using the Don King doubletalk and bullshit you’ve become accustomed to if you’re my age. Several times, King will show up to dispute what we’ve seen with our own eyes. At one point, his bullshit is so tight he almost convinces you to question yourself. 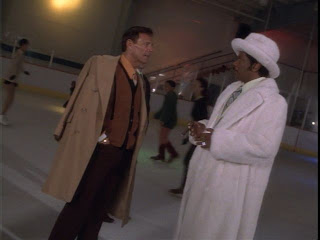 While in jail for manslaughter, King gets the idea to become a manager/fight promoter. He teams up with Hank Schwarz (an unrecognizable Jeremy Piven) and opens a business in Cleveland. King sets his sights on Ali, who in 1971 was trying to get his title back from Joe Frazier in the first of their three classic bouts. Ali lost that bout, and Frazier went on to lose his belt to the old-school George Foreman, the one who was mean and scarier than Tyson in his heyday. In order to sever Ali’s ties with his longtime promoter,  King tries going through Ali’s manager, Elijah Muhammed’s son Herbert Muhammed (Keith David). When that doesn’t work, he tries to block Arum by offering more than twice as much money for the title fight between Ali and Foreman. King doesn’t have the money, but a little detail like that won’t stop his determination. Knowing Ali is a Muslim, King plays up the importance of being promoted by a Black man, even if that Black man has no experience whatsoever.

Now that he has the fish interested in the bait, King gets an idea or, as he calls his ideas, “an epiphenous experience of pure religiosity.” He decides to set the match in Africa. This intrigues Ali, who sees a trip to the motherland as something that would fulfill a need in him to be close to his ancestors. King gets his deal, as history tells us, and the Rumble in the Jungle is set for October 1974. There will be a big concert with Lloyd Price, The Pointer Sisters, and James Brown before the fight. Don King: Only in America does a good job covering the same ground as the excellent documentary, When We Were Kings. It fills in some blanks with dramatized scenes of King interacting with the president of Zaire and Lloyd Price’s apology to a lawyer King has assaulted with a thrown drink. King sees this as a betrayal by Price, and their relationship is basically severed. 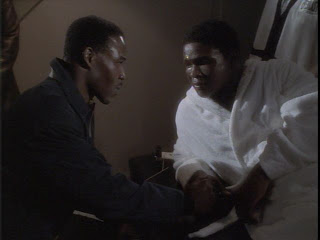 Don King: Only In America benefits from a superb acting turn by Darius McCrary (Eddie from Family Matters!!!) as Ali. McCrary nails the voice, and the prosthetics make him into a credible Ali. The Rumble in the Jungle is the fight where Ali used the “rope-a-dope” to defeat Foreman. “Rope-a-dope” can also describes what King did to his fighters, including Ali. Late in the film, a battered McCrary slowly speaks to the man who beat his ass in the ring, Larry Holmes. Holmes begs him not to fight anymore. “If you need money, I’ll help,” Holmes tells the mentor with whom he used to spar. “When Don King gets finished with you,” Ali tells him, “you won’t have much to spare.” 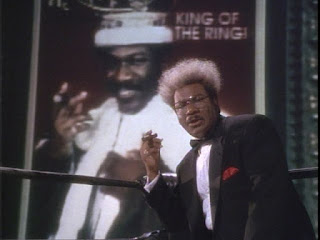 Ali should know. He sues the shit out of King, but King knows Ali is tired and suffering from what will later be diagnosed as Parkinson’s Disease. He sends $50,000 cash to Ali, along with an agreement for him to sign. The agreement will absolve King of any moneys rightfully owed Ali. When challenged on whether Ali will accept or go on with his suit, King says “To someone who grew up with no money, $50,000 cash is better than a check for a million dollars.” Cash doesn’t bounce. Ali takes the money.

Commentator King pops back onscreen to give his standard defense. “Did I hold a gun to his head?” he asks us. It’s this slippery logic that makes both the fictional and the real Don King fun to watch, a guilty pleasure simply because we know he’s horrible. “You love my Black ass!” he tells us. “I’m entertainment!” 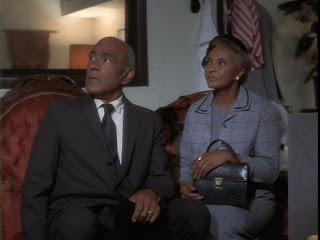 Salem’s screenplay gives Ving Rhames plenty of delicious dialogue to render, both in context and in commentary. Don King: Only in America contains the greatest use of the word motherfucker ever put onscreen. King convinces an old reverend and his wife that the word “muthafucka” was invented by Blacks and was the only thing that hadn’t been taken from us. “Black people don't get no credit for nothing,” says  King in order to combat the couple’s offense at the word. “All we've got is one word. That word is muthafucka.”

He goes further, as always surveying the situation (these are religious people) and adapting to it. “You know who’s a muthafucka?” King asks them. “The devil’s a muthafucka!” He convinces the wife to say the word multiple times. In print, I cannot do it justice, but when you see this prim and proper woman yell out with religious fervor a ten letter word that isn’t “hallelujah,” you will find yourself on the floor. Don King is a man seductive enough to make both Lloyd Price and George Foreman sign blank pieces of paper as contracts. Surely he can get the pastor to cuss. 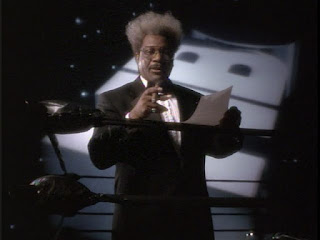 As King, Ving Rhames is brilliant. This is a fantastic performance, nuanced and complex, running the gamut from comic to horrific to tragic. Rhames nails King’s voice and mannerisms. He even looks like Don King. Whether turning on the charm for the film’s characters, or talking directly to us, Rhames is flawless. He even successfully navigates the film’s one cutesy meta moment, turning a profanity laced tirade about the network running this film into more than just an audience wink. He also tells HBO “I don’t see y’all making a movie about Bob Arum!”

Rhames also handles the dramatic moments well. Don King: Only In America gives him a terrific speech about his father falling into a vat of molten steel at the mill. “They didn’t even close the mill,” Rhames tells his stepson Carl (Lahmard Tate). “They gave us what they called ‘nigger tragedy money’,” he continues, telling Carl that this was the moment he realized that the world was “out to fuck him.” King sees this as solid reasoning for the way he flim-flams the boxers he gets after Ali, including Larry Holmes. The boxers don’t fight back, at least not physically. The film’s earlier scenes of graphic violence illustrate just how dangerous this man, with his silly hair and his made up words, can be if provoked. 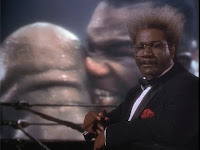 Like Super Fly’s Priest, Don King is out to make money for himself, and it doesn’t matter how many people get crushed en route to the Big Score. King fucks with contract verbiage, pays less than he promises, and then plays the victim. The one time he’s actually right about being the victim, it still comes off as insincere. When Tyson bites Holyfield’s ear, King tells us “Y’all said Tyson bit his ear because I wasn’t feeding him.” He goes on, saying “let me tell you something: Tyson will be heavyweight champ again. And this time, you'll pay twice as much to see it.” We would have. 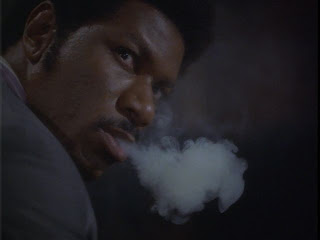 For all its comic dialogue, this is a very dark picture. So why do I like it so much? I can attribute that to Rhames, who plays Don King as if we were being told the Garden of Eden story from the snake’s perspective. King tempts these impoverished boxers (or boxers of some success like Ali) with the promise of a tangible payday, and when they bite into the apple, he entraps them. Then he says “well, I didn’t force you to eat it…” There’s something awesomely wicked about that, and while I could never root for King, the real or the fictitious one, something about him never being caught for his hustle caters to the hoodrat in me. King tells us at the end of Don King: Only in America, “If you didn't have Don King, you'd have to invent him.” Just reading about all the things King did and got away with, it feels like somebody did invent him. Truth is stranger than fiction. 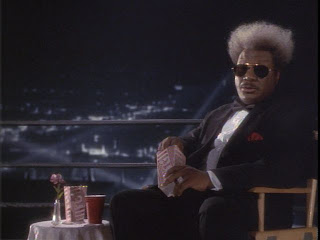 He'll share his popcorn with you, but only if you'll sign this blank piece of paper.
Posted by odienator at 3:34 AM