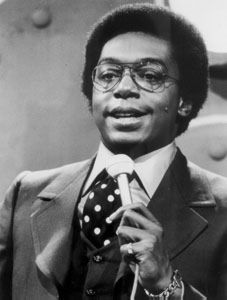 What you are reading right now should not be here.

I don’t know if you’re aware, but the Black History Mumf series is written on the fly. That is, I write it the day it goes up. Today’s piece, which I was currently in the midst of writing, was called Spike Lee’s Modest Proposal, and was about the film, Bamboozled. This was the film I slotted for the opening of Black History Mumf 2012. What you are reading now was originally slated for Super Bowl Sunday. The plus of writing BHM by the seat of my pants is the ability to change on a dime and reschedule a piece at my leisure. What is unfortunate is the reason for this rescheduling.

Long-time readers of the Mumf know of my affection for Don Cornelius. In 2008, I wrote a piece called The Soul Train Conspiracy Theory, wherein I detailed said affection for Mr. Cornelius and the show he created in 1971. Of Cornelius, I wrote:

“He created a show and put dancing minorities on it. He even showcased them on the famous ‘Soul Train Line’ where people would dance down the center of a group of people standing off to opposite sides. Cornelius was like a Black Ed Sullivan, putting talent on and then talking to them afterward. Like Ed, he seemed to have mobility problems. But no matter, Don Cornelius was smooth.”

At the time, I had no idea where Cornelius was. It was as if he’d disappeared off the face of the earth, only appearing as a disembodied voice on The Soul Train Awards. As host, he’d been replaced by a slew of inferior talent on Soul Train as well. Hence the “conspiracy theory” of my title. A reader named Pat Connolly chimed in under the comments section to inform me of Don Cornelius’ whereabouts. I gave a shout out to Pat Connolly at the end of 2008’s edition of Black History Mumf. It pains me to have to answer my own question as to the whereabouts of Don Cornelius now:

Don Cornelius, creator and host of Soul Train, is dead.

According to the Associated Press, the 75-year old pioneer and supporter of soul music acts committed suicide this morning. I’ll leave you to read the article for details, but my heart is so broken I decided to move this piece to today, and save Bamboozled for another day. Minus the first paragraph, which would have been  me chiding you as I do every Super Bowl Sunday for making me work when I should be watching the game, this is exactly as I would have written it on Sunday. It was to be called The Soul Train Super Bowl Halftime Special, featuring my favorite Soul Train clips and a little bit about each. That is what I would have done on Sunday, and what I am going to do now.

As such, Black History Mumf will be dark, that is, absent a piece, this Sunday, February 5th, to honor the man who changed Saturday mornings for me and thousands of little Afro headed boys like me. The hole in the schedule isn’t even close to a representation of the hole in my heavy heart and nappy soul.

If you are truly an afficionado of the show, you can bet your last money that I'd start here.


This may be the greatest Soul Train performance ever. When I found this clip earlier in 2011, I hadn't seen it in about 35 years, yet I remembered every single thing about it. From its funk-drummer style editing to the inspired dancing of Tex and the woman he's "got," this is the essence of Soul Train. I watched it 17 times in a row--seventeen!!!--and I couldn't sit still once. I dare you to try it yourself. You will be "gotten" for sure. Now, give it here...


Al Green, For the Good Times

Elton John, Benny and the Jets


Yes, folks, White people were on Soul Train too! I'll always remember the first time we saw a White person dancing on Soul Train, which is a story for another time. In the meantime, a leprechaun-looking Sir Elton appeared after Fat Albert on my Saturday Morning TV for good reason: Benny and the Jets went to number one on the Rhythm and Blues Chart. As a kid, I always thought the lyric went "She's got electric BOOBS, a Mohair suit, you know I read it in a maga-zeeeeeene oh oh!" To this day, I see a woman with giant light bulbs on her tits whenever I hear this song. Misheard or no, that line was the only one I understood in this song.

On VH1's Classic Albums TV show, Sir Elton said he wondered why the song was such a big hit in Black circles, and if he's reading, I'd like to tell him why. The original recording has these intentionally off-beat claps during the piano solo ("English people were always clapping off beat," he tells us), and for some reason, that was the part of the song every Black kid I knew liked to dance over. You could do a kind of mechanical step or pop-lock motion. It also had a rather soulful piano melody and a repetitiousness that was fun to dance to, at least for us. Maybe I'm crazy, but I'll fight opinions out in the street to find who's right and who's wrong...(another lyric I obviously misheard as a kid.)


I wish I still had my Afro. And my old nose! (It was broken during my boxing days, people!) The Jackson Five are here to do the dance you did when this song came on: The Robot. There's another appearance of theirs I like even more, but apparently it's not on YouTube, so I went with this chestnut instead. We saw you doing the Robot while watching this. Dude, you need oil.


WAAAAY too many people lip-synched on Soul Train. Not here! Barry White is obviously live, and sounds great too. I love this clip for the moment the Soul Train Camera spins around to show you the Love Unlimited Orchestra. It makes me go "Wow" every time I see it. And that shirt on the Walrus of Love is just...awesome. The instrumental bridge in this song never sounded better, either.


Don Cornelius, with the Afro you remember, shows up here to introduce this clip of The Queen of Soul. I'm gonna call this clip exactly what it is: AFROLICIOUS! Check out all the blowouts, and note that Ms. Franklin's Afro is the same color mine was as a kid. Hers looks a LOT better than mine did. I love that the Soul Train sign was so easily dismantled too. In both of the last clips, it's been altered!

I chose this over numerous Soul Train Dance Line clips for three reasons: One, the song is intensely danceable, Two, I've ALWAYS wanted to be on the Soul Train line, and Three, the chick in the flowered pantsuit has haunted my dreams for years. What's that, Reverend Green? "Lord Have Mercy!"

Aretha Franklin Brings It Home For Us


This wasn't originally part of my list for Sunday, but I thought it would be a fitting end to this piece. A little gospel music never hurt anybody, and for such a somber occasion, I thought it fitting to end here rather than the Soul Train Line Clip that would have closed us out originally.

Dig up your own Soul Train Clips and enjoy. Buy some Afro Sheen too.
Posted by odienator at 5:15 PM

R.I.P. Mr. Cornelius. I wasn't exactly the target audience but I was still hit by the TRAIN weekly as a child of the 70's.

Caught the very first episode not too long ago on Centric and in addition to Ms. Knight (still awesome; she was at the Tropicana in Vegas when I was out there last year) I was delighted to see two songs from The Honey Cone. "Want Ads" and "Stick Up", of course. They shoulda hung around longer.

Hal, the Honey Cone! My cousin used to have their record. She'd put it on and then jump in front of the record player singing "Wanted! Young Men Single and Free!"

One clip I should have posted was Freda Payne. She came on to sing Band of Gold, and she was moving her body along with the song. A male cousin and I were moving our heads, and my aunt realized we were following Freda's boobs (how could you NOT?). She slapped the shit out of both of us.

I saw Gladys Knight in Vegas. She was great.