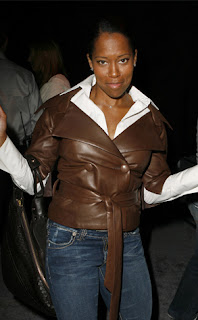 In my book, Regina King can do no wrong.

Regina King started her acting career on Marla Gibbs' sitcom 227, where she played Gibbs' daughter, Brenda. Soonafter, she became part of John Singleton's acting troop, playing roles in Higher Learning, Boyz N The Hood and the movie in which I first took notice of her acting skills, Poetic Justice. She is equally adept at comedy and drama, stealing scenes in both venues. And no matter how small or inconsequential her role is, she gives the same high caliber performance every time.

Currently, she voices both Huey and Riley on the hit-or-(mostly) miss Adult Swim cartoon The Boondocks. It's symbolic casting, as Huey is level-headed and mature and Riley is militant, uber-ghetto and reactionary, two types King has woven into her performances--sometimes simultaneously, sometimes separately. In Poetic Justice, for example, she plays the extremely unlikable, hen-pecking girlfriend of Joe Torry. Her performance is equally repulsive and compellingly watchable. She picks at Torry until he punches her in the face, causing her to explode in an equal amount of violence. Yet, elsewhere in the film, when Jackson's Justice is acting up, King convincingly talks some sense into her.

King has played the wife/girlfriend role more times than I can count, but each time she's different. In Daddy Day Care, she's the reason Eddie Murphy opens that disaster day care joint. When her lawyer character goes back to work, Murphy's left to take care of the kids. I question her decision to leave kids with the self-proclaimed Fuck You Man, but the few scenes she has in the film are well played.

In Enemy of the State, she plays Will Smith's wife. Smith has had an affair with Lisa Bonet, and when King finds out he's been in contact with her again, she has an honest, realistic, and scary reaction. It's a small scene but it stands out. In a film about paranoia, King taps into a different kind, that of a crossed wife whose suspicions have built ever since the moment she found out about the prior affair.

In Chris Rock's horrible Down to Earth, King plays an activist who falls in love with Chris Rock. Except Chris Rock isn't Chris Rock, he's some old White man whose body has been commandeered by Rock's soul thanks to a mix-up in Heaven (this is a remake of Here Comes Mr. Jordan/Heaven Can Wait). The problem with the film is that we see King reacting to Rock when she should be reacting to the old White man. While the concept of a young, vibrant woman falling in love with a decrepit old man may seem distasteful, I believe she could have pulled it off. She reacts to Rock as if he were the old man, that is, she gives the performance she's supposed to give. It's just opposite the wrong actor.

In Jerry Maguire, she plays the wife of my doppelganger, Cuba "Show me the money" Gooding Jr. , and she is fantastic. Behind every great man is a woman, the saying goes, and King turns the role into a dissertation on standing by and supporting her man. She's his number one fan, and she's a pillar of strength and sense. Gooding's Rod Tidwell is obnoxious but in Gooding's scenes with King, we see genuine tenderness and respect. It's a nice, Black love story hidden in a big budget White rom-com. During his crazy Oscar speech (go ahead, watch it! I linked to it above), Gooding makes sure he thanks King.

And lest I forget her unhinged, go-for-broke performance in Ray as Charles' mistress, Margie Hendricks. This could have been just another angry other woman performance, but King doesn't make it that easy. "On the road, I'm Mrs. Ray Charles," she says, in a line that seems delusional considering Charles' rampant womanizing, but Margie knows she's deluding herself. She has an idea of what she wants, and she goes for it, consequences be damned. Her anger and hurt come out in fierce bursts of fire, just like in Poetic Justice, and she goes toe to toe with Foxx, almost pushing him off the screen. When Charles riles her up just so he can get the appropriate
vocal performance from her for Hit the Road, Jack, the intensity between the two actors speaks volumes about their relationship.

King also had a recurring role on 24 as Sandra Palmer, and if I had known that I probably would have watched the show.

Someday, someone is going to write the tour-de-force performance for this talented actress and she'll get the attention and praise she deserves. For now, whenever I see her name in the credits, I know there's one aspect of the movie I'm going to enjoy watching.
Posted by odienator at 11:45 AM

Your piece reminded me of an old "2 Stars 1 Slot" from
FameTracker. I was surprised at how well the assessment holds up, including the notion that King is on the cusp of breaking through to bigger things. Sadly, the piece is from 2001, and King's still waiting.

Anon, thanks for that link!

So long as the Reginas are working, that's all I can hope for at this point. I enjoy both of them.