Here's what was supposed to happen today. It's Valentine's Day, and I was going to write about a nice, romantic Black-themed movie called love jones. I've seen the movie before, and even have my original review, but the general rule here is that I watch the movies again before I write about them. So, I ordered it from Netflix, and Netflix didn't deliver it. In fact, it's been four days since I returned my last movies, and I haven't heard shit from Netflix. The Midwestern Netflix plant must be run by goats, because I've had nothing but problems with them since I moved out here. They especially have problems if you're renting Black movies. My last movie had to be mailed from California! I'm afraid Mahogany is going to get here next week and it's going to star Mos Def and Jack Black.

There's a Blockbuster Video up the street from my house, and I would have gone there had it not been for my longstanding ban against them. Several years ago, I rented Basic Instinct and, how can I politely put this? Somebody had robbed the pussy out of the movie. Blockbuster had edited the movie, giving it a cinematic decoochification. I didn't believe the rumor that BB Video edited their movies until Sharon Stone opened her legs and suddenly I was watching The Sound of Music. So Blockbuster was out. I'd rent love jones from Blockbuster and I'd get Monkey Hustle.

I used to own a copy of love jones, but I loaned it out to some triflin' Negro who still hasn't returned it. I hope when he's about to get some Valentine's Day nookie from his girl, she turns out to be in the same condition as my rented Basic Instinct video.

So, I'm sorry, ladies and gentlemen. There will be no love stories told here today. As Gwen Guthrie once sang: Ain't Nothin' Goin' On But the Rent. No romance without finance.

Violence, on the other hand, is something I can provide.

Continuing our series on people with ties to Black movies of the 70's, let's focus on Spielberg's favorite editor, Michael Kahn. Kahn is a seven-time Oscar nominee and three time winner. He edited Schindler's List, Saving Private Ryan and the movie I consider the best time I've ever had in a theater, Raiders of the Lost Ark. He also edited Poltergeist and The Color Purple. In fact, Kahn has edited every Spielberg movie since Close Encounters of the Third Kind, his first Oscar nomination. But Kahn also has a past chopping up Blaxploitation movies. Here is some of his handiwork. 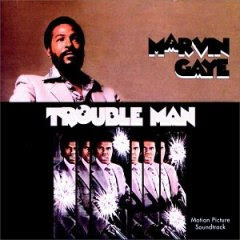 recommend in Trouble Man. Robert Hooks plays Mr. T (no not that one, fool!), a sharply dressed man with Paula Kelly waiting at home for him and Paul Winfield's Chalky waiting for him at "work." It takes balls for a movie to name someone Paul Winfield's complexion Chalky, and even bigger balls to make his partner in crime Ralph Waite, the father from the Waltons. An early entry in the blaxploitation genre, Trouble Man boasted a terrible script by John D.F. Black, who collaborated with Ernest Tidyman on Shaft the year before. Kahn showed little of the editing promise he'd display later, though he is mildly inspired during the film's violent scenes.

Marvin famously sang "there's only three things I'm sure of: taxes, death and trouble." He must have also been sure this movie stunk before he wrote those lyrics for it.

On the Shaft DVD, Isaac Hayes said he auditioned for the part of Shaft but didn't get the part. So, 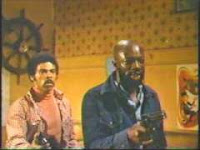 like when Sylvester Stallone played Cobra as a violent response to losing the lead in Beverly Hills Cop, Hayes played Truck Turner as a violent response to not being Richard Roundtree. Watching Truck Turner, you'll realize Gordon Parks made the right choice in keeping Ike on the music. Truck Turner is a bounty hunter who always gets his man. He is also stiff as a board in every non-action scene he appears in. It's painful watching Hayes try to act, but he's saved by something and no, it's not Michael Kahn's editing. That's lousy here too. (One character's murder has one of the worst editing jobs ever committed to celluloid.) Truck Turner is saved by Nichelle Nichols, Uhura from Star Trek! She plays a madam here, and she says "bitches" more than Kirk said "Beam me up." Her character is so deliciously evil that whenever she's onscreen, Truck Turner is loads of fun. She chews the scenery with enough ferocity to make Shatner seem subdued. Nichols is abetted by the always scary Yaphet Kotto as a pimp who can win her business if he blows away Truck Turner. Worth seeing just to hear Uhura's potty mouth.

Finally, we see some life from Kahn's editing, but how can you mess up when you've got Jim Kelly and the director of Kelly's breakthrough film, Enter the Dragon? Done to cash in on Dragon, Black Belt Jones is Kelly doing what he does best: kicking ass without causing damage to his

dynamite Afro. (We spent hours picking out our 'Fro's trying to get them to look as good as Kelly's; mine always wound up looking like a red, electrocuted porcupine.) The standard martial arts plot applies here: Kelly must defend his old dojo, and yes, they killed his teacher. Since this is a Blaxploitation classic, Teacher is played by Hong Kong Phooey himself, Scatman Crothers! Black Belt Jones (Kelly) is joined by the Scatman's daughter, Sydney (Gloria Hendry), a woman who knows how to mop a floor...using the Mafia as a mop.

Black Belt and Sydney spend the rest of the movie kicking ass and taking names. There must be a Guiness Book record earned for crotch abuse and people flying through breakaway glass; I always have a good time watching this one. BBJ is not as stupid as its pseudo-sequel, Hot Potato, nor does it have a scene as cool as Kelly's cop ass kicking in his next movie, Three the Hard Way. (Say it with me: "YOU SET ME UP!!!") It is still a lot of fun nonetheless, and a few action sequences show what Kahn would later be capable of doing for Spielberg.

I should have just come out here and written about Booty Call. I own a copy of that. 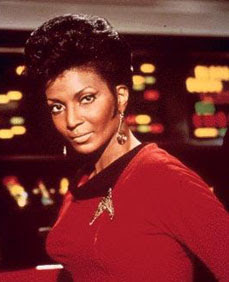 This is my Valentine's Day present to myself. Don't mind me.

Posted by odienator at 2:08 AM

No explanation or apologies necessary. Valentine's Day is merely a disingenuous corporate racket. It's cruel manipulation for heartsick suckers-- as is a picture of Uhura cropped above the miniskirt and gogo boots (damn you).

Besides, we already have your House Party, Weezy, Coming to America and Diana Sands valentines to swoon over.

It's cruel manipulation for heartsick suckers-- as is a picture of Uhura cropped above the miniskirt and gogo boots (damn you).

I bet you're wondering where the bottom of that picture is...

Hey Love Commercial: No, my bruva. You've got to get your own.

Yeah, Kahn wasn't working with any Spielbergs here. An editor's only as good as the coverage his director got on set. A lot of those 70s exploitation flicks were shot so fast and tight, it was often up to the post-production team to cobble together something watchable.

Looks like Kahn doesn't have much to say about his drop of black cinema. I came across this interview, which jumps a decade from his days as a cutter on Hogan's Heroes to his work on The Return of a Man Called Horse and Close Encounters of the Third Kind.

Let's ambush him at a film festival Michael Moore style, throw a copy of The Spook Who Sat by the Door at his feet. "Do you recall cutting this, Mr. Kahn? Mr. Kahn?"

That's why I started this series (and why I called it what I did)! We should ambush him. I'll get the gold chain shirt that Isaac Hayes wore at the Oscars, and I'll show up on the set of the latest Indy Jones movie saying: "I'm Truck Turner, and I'm your illegitimate Black movie!!"