One Drop of Black Cinema: John A. Alonzo

The One Drop of Black Cinema series has pointed out people who got their start in Blaxploitation, and folks who ended their careers in Blaxploitation. Those folks either ran off to “better things” or left the Earth for the afterlife. Today, I’m putting the spotlight on someone who continued to work in Black film at the height of his career. Not even an Oscar nomination for one of the greatest movies ever made stopped him from working in low-budget Black film.  In the five years I’ve been doing this series, he’s been something of an unsung hero at the Mumf; I’ve written about six of the movies he’s worked on, and at other sites, I’ve written about several more. Not only has he lit more Black faces than Chocolate Thai, he shot the one 80’s movie most ghetto denizens (this one excepted) love to pieces. I should be ashamed of myself for not doing this sooner, but today I’m giving props to Mr. John A. Alonzo.

This cat had a fascinating career. He started out as an actor and puppeteer, making him the first actor I can think of who left acting for cin-tog. Most actors want to direct, which Alonzo managed to do 6 times, but I can’t name any who went the cinematography route. According to Wikipedia, Alonzo met Charles Lang on the set of The Magnificent Seven, and this, coupled with a later meeting with Hollywood legend James Wong Howe, led him to figuratively put his name in lights. After shooting National Geographic documentaries and TV shows, he teamed up with Angie Dickinson and Roger Corman, shooting Bloody Mama in his theatrical debut. His career in front of the camera gave him an insight to what it was like to be the subject of lighting and lensing. Though only nominated for one Oscar (for Chinatown), Alonzo’s tutelage helped his most famous student, John Toll, win two Oscars.

Looking at his career on Wikipedia, it appears Alonzo didn’t have a snobby bone in his body. He swung from Oscar fare like Norma Rae and Chinatown to genre work like Star Trek: Generations and Black Sunday. Sometimes it might have paid for him to be a little bit snooty—he shot HouseSitter and the dreadful TV sequel, Look What’s Happened to Rosemary’s Baby—but he also shot Farewell, My Lovely and Harold and Maude. Some of his other assignments include pointing his camera at the potty-mouthed kids in The Bad News Bears, at the Great One Jackie Gleason, and at robotic roaches in one of my all-time favorite bad movies, Runaway. Who else can say they worked with Jack Nicholson AND Gene Simmons? 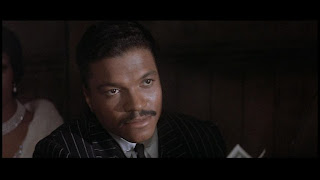 Alonzo worked with several actors numerous times: Nicholson, Walter Matthau, and Sally Field worked with him twice. Pulling him into our little realm of Black History, he did three films with Billy Dee Williams. Richard Pryor did five films with him, including entrusting Alonzo with his directorial debut, Jo Jo Dancer, Your Life is Calling. With Pryor, Williams, and director Sidney J. Furie, not to mention Miss Ross, Alonzo created one of the most glamorous treatments of Black cinema Hollywood ever produced. Ghetto denizens owe him a debt for bringing our favorite movie introduction to the screen.

Of that scene in Lady Sings the Blues, I wrote:

“Director Sidney J. Furie has that arm enter the frame at the bottom left, attached to a $20 bill. After the line, cin-togger John Alonzo brings a close-up of the face of Colt 45 and Cloud City out of the darkness and into the hearts of women everywhere. It's not Williams' first scene—he has an earlier entrance that would make Bette Davis envious—but it's his first line of dialogue and he has you at hello.”

Furie, Pryor, Williams and Alonzo reteamed two years later for Hit!, an action movie with Billy Dee out to get the gang of dope dealers who caused his daughter to O.D. Five years before Blue Collar, Pryor turns in a stunning dramatic performance as a man whose wife is raped and murdered by a junkie. It’s hard to come by but well worth seeing. 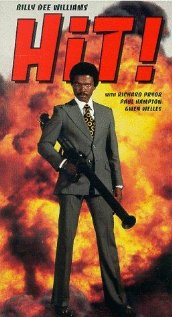 By himself, Pryor shows up with Alonzo for Which Way Is Up?, Jo Jo Dancer and the Black Woodstock, Wattstax. Of Wattstax, I wrote:

For my money, Alonzo’s best work is in the movie he got an Oscar nomination for, and the one for which he should have won. Of Chinatown, enough has been written to fill volumes. But Sounder captures Alonzo working on both an intimate and a grander scale. He and Martin Ritt create both vast landscapes and intimate tight shots, each infused with such emotional richness that the film’s visual look alone made me weep. Of Sounder, I wrote:

“How John Alonzo didn’t receive an Oscar nomination for cinematography is beyond me. There are gorgeous widescreen shots of wide open spaces, both in the light and the dark, and effective use of close-up to convey emotion. The spaces where Sounder takes place seem like vast, wide open areas where you can walk for days to get where you need to go. Alonzo’s work helps Ritt achieve, through visuals and placement, these quiet moments of desperation and helplessness, as well as boisterous outpourings of joy.”

Please take a look at the screenshots in my Sounder piece, and tell me this man wasn’t robbed. 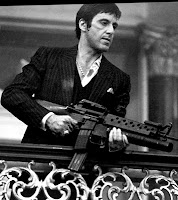 Behind the camera, Alonzo worked with some of the best and most famous directors, Ritt, Mike Nichols, Roman Polanski, Hal Ashby, and lest I forget, Brian DePalma and writer Oliver Stone. When Al Pacino screams out “Say Hello to my Little Friend!” John A. Alonzo shows it to you. Scarface is one of the most beloved movies in the ‘hood, and while I could never commit to that picture to save my life, I must admit it is superbly shot.

For making so many movies loved by so many minorities, Alonzo deserves some major dap. The A.S.C. thought so too, making him the first cinematographer of Mexican/Latino descent to be inducted into their ranks. All we can offer the late Alonzo here at Big Media Vandalism is our undying respect.

Rent some of this man’s movies. It’ll be easy to find good ones.
Posted by odienator at 6:31 PM

Well, at last. :-) I must grab a copy of THE HIT and revisit SOUNDER very soon. And just in case folks missed the further-reading link: http://bigmediavandal.blogspot.com/2011/02/boy-his-dog-and-his-daddy.html

Alonzo was in that camp of resourceful Ho'wood cin-togs who knew how to make beautiful images at whatever budget level. Conrad Hall and Gordon Willis (One-drop request: THE LANDLORD) were two others.

Blue Thunder! The first R movie I ever snuck into. Thank you, John Alonzo, for not forsaking the lowbrow after being recognized by the Academy.

Phil, I remember Blue Thunder! It had some nekkid ladies in it, if I remember. And a kick ass helicopter! And Roy Scheider!

This was a long time coming, and I'm glad I finally got to sing Mr. Alonzo's praises.

Excellent appreciation. He directed one of my guilty pleasures, FM.

Larry, thanks for mentioning FM. I enjoyed that movie as well. I saw it the same day I saw the dreadful yet awesome The Manitou! Alonzo did a far better job than Gordon Willis did on his directorial debut 2 years later.