Long before it became a favorite of flash mobs and inmates in prison, Michael Jackson’s Thriller was a game-changing music video. It was 14 minutes long, told a self-contained story and marked the first time a major Hollywood director tackled a music video. It had a Tony-winning choreographer, an Oscar winning makeup man and a multiple Grammy winning lead. Thriller was also the first video to have an hour-long documentary made about it, the first documentary I ever saw. I must have watched it 17 million times in 1983, about 2 million times less than its subject.

In 1983, Michael Jackson was everywhere. It’s hard for the younger generation to grasp how big he was, because by the time they came along, Mike was looking far worse than the zombie he portrayed in the Thriller video. As teenagers, my cousins and I thought he was a little weird, bringing chimps to the Grammys and wearing one glove, but there was also an undying adoration. The man could sing, he could dance, and he knew how to take over the show and own it. When he did the moonwalk on Motown 25, roofs blew off houses in the ‘hood. It wasn’t that we’d never seen it before—as a breakdancer I’d been moonwalking before Jackson claimed it as his own—it was that he was doing something we hoodrats were doing, showing it to the world with a mastery of which we could only dream. 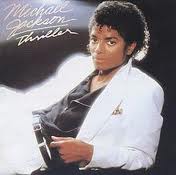 I was a freshman in high school when Thriller came out, which makes the album 30 years old (and me 30 years older) this year. I owned a cassette tape of it and the original vinyl album which, believe it or not, I still have. It may be blasphemous for me to say this, but I always preferred Off the Wall to Thriller, despite the latter having the greatest beat Jackson ever wrote. Until the Thriller video, I was lukewarm toward  Rod Temperton’s composition about watching scary movies. I thought the best thing about it was the Vincent Price part. By 12, I’d become quite partial to Price courtesy of Channel 9’s Fright Night. I had yet to discover that the gory movies I kept sneaking into were also avenues to some serious physical closeness with the opposite sex during the gross parts.

Director John Landis knew all about that; in 1981 he made An American Werewolf in London, a film chock full of moments designed to get your girl to scream and bury her head in your, um, chest.  My cousins and I snuck into that, much like we’d done the year before for Landis’ The Blues Brothers. Werewolf became something of a classic, a favorite of many people including Michael Jackson. His album was no longer on the top of the charts and he was trying to get some attention. Landis’ film convinced Jackson to seek him out to direct a third video from the Thriller album. To the finished product, Landis delivered the same loosey-goosey gruesomeness found in Werewolf, using that film’s Oscar winning makeup artist, Rick Baker, to bring an eerie prescience to Jackson’s visage. 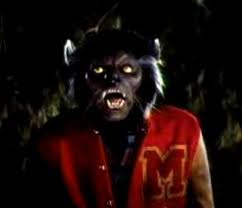 Landis and Jackson flesh out Thriller’s lyrics about things that go bump in the night, providing a movie within a movie as a starting point. In it, a 50’s era boy and girl profess their love for each other on a moonlit night. The female, in her poodle skirt, and the male, in his varsity jacket, cut the perfect, albeit colorized, portrait of young and innocent lovers. “I have something to tell you,” says the boy, “I’m not like other guys.” He then proceeds to prove it by turning into something that looks like a really pissed off LOLCat.  The girl runs, but she can’t escape her fatal fate.  “See you next Wednesday,” an announcer informs us as we join our main story. A young woman (Ola Ray) on a date with a guy (Jackson) leaves the theater showing that movie in disgust. She’s had it with all the gore, but part of her enjoyed being scared. 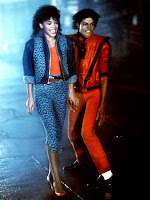 Her boyfriend teases her, turning his “They’re Coming To Get You Barbara” moment into a musical number. As he sings about “something evil lurking in the dark,” he and his lady share an easy, flirtatious chemistry. This is foreplay, to be sure, but not the kind that ends with anyone showing their “See You Next Tuesday.” Instead, as the lovebirds walk home, zombies of all shapes and sizes leave their graves looking for dinner. Once surrounded, the girl realizes that she too has been walking with a zombie. Even though it turns out to be a dream, things don’t end well for her.

Of course, no plot description can do justice to the sheer joy of watching Michael Jackson’s Thriller. I hadn’t seen the video in years, but when I sat down to watch it tonight, I knew it would hold up. Landis strikes the right atmospheric note, from his 50’s horror movie parody (complete with intentionally kinda cheap looking makeup) to the emergence of the realistically gruesome undead. Landis walks a fine line between the morbid and the amusing (one zombie’s arm falls off mid-walk), but he doesn’t sink to mockery. His straight-ahead presentation of the horrible events of the night keep things from getting silly when the dance of the undead begins.  I especially love the moment when Ray, surrounded by the zombies, realizes that her paramour has become one of them. The camera spins around to reveal Rick Baker’s makeup on Jackson, and Landis’ shot of Ray feels like falling into a nightmare. 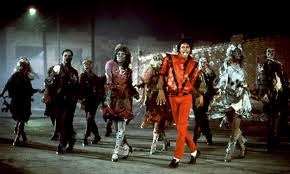 Thriller’s undead dance number has been done and redone as of late, from marching bands to the aforementioned flash mobs and prisoners. However, nothing can recreate the energy with which George Folsey Jr. and Malcolm Campbell edit Landis’ extensive coverage of the proceedings. Michael Peters, fresh off a Tony for choreographing Dreamgirls, collaborates with Jackson to create the funkiest dead people in history. Rick Baker’s makeup effects and Deborah Nadoolman’s costuming make the dancers literally funky, their dusty and decrepit bodies in thrall to the music. That it doesn’t look silly, even by today’s standards, is a testament to the talent at hand. 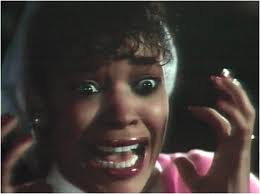 Jackson is the glue holding this together. He’s charming and innocent in the 50’s section, goofy and seductive in the 80’s section, and suitably menacing in both eras when things go downhill. His dancing is flawless, and his performance turns a mediocre song into a classic. Ola Ray isn’t given much to do besides look pretty and express fear (typical for a horror movie gal), but she does both well. When Jackson and his creatures bear down on her, her fear is palpable. Landis shoots the siege on her house like a real horror movie, an effective scene of destruction and terror. He and Jackson’s final goosing of the audience ends the video nicely.

Without a doubt, this is the best video ever made. You know you wanna watch it, so I’m giving it to you below. But I warn you, if you’re my age, it’s going to make you  feel old. Damn old. The Thriller album is 30. Remember that. It’s thirty.

Thanks for the official video!