The Content of Their Character Actors: Roscoe Lee Browne 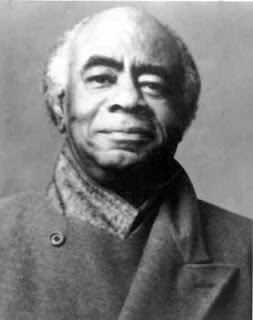 When one thinks of a Black actor known for his voice, James Earl Jones usually springs to mind. Not to take anything away from Mr. Vader, but the first answer I think of in this mental equation is Roscoe Lee Browne. Perhaps this is because, if the notion a baby can hear in the womb is true, then Browne’s is one of the last voices I heard before I was born. My mother went to see William Wyler’s last movie, The Liberation of L.B. Jones, the day she went into labor with me. That’s a nice story, but the more logical reason is that Browne’s voice is a shining example of great erudition and enunciation. It’s a voice that his appearance aged into, for in his younger days it was jarring to hear it emanating from something that looked so ghetto. Young or old, this beautiful voice possessed the skill to cut you down with a well-timed remark, in comedy, tragedy or even reality: In response to a director’s comment that he “sounded White,” Browne said “we had a White maid.”

After university, Browne spent a few years selling wine before deciding to become an actor. In the 60’s, he appeared on stage with fellow up and comers James Earl Jones and Cicely Tyson, an actress who matched him note for note in the battle for distinguished actorly voices. Browne wrote for the stage and appeared in famous plays like Jean Genet’s The Blacks and Shakespeare’s Julius Caesar and Othello. He also began appearing in movies, showing up, folding the scene under his arm and leaving with it. He worked with Hitchcock in Topaz and in Rififi director Jules Dassin’s militant Black rewrite (with Ruby Dee) of John Ford’s The Informer, Up Tight! This led to his work as the titular L.B. Jones, the undertaker whose murder and castration my Mom subjected herself to on my birthday eve. Browne apparently didn’t hold a grudge; for years he did poetry and prose readings on stage with Anthony Zerbe, the actor who helped murder him for Willie Wyler.

Even though Browne steered clear of most stereotypical Black roles, he accepted the part of Robert Guillaume’s replacement on the groundbreaking 70’s sitcom, Soap. Guillaume’s Benson character had been spun off to a sitcom of his own, on which Browne also appeared. After spending three years on Soap, Browne returned to Broadway, after years of appearing on sitcoms like Good Times and Maude and in TV movies, to sing and dance for Tommy Tune in My One and Only.

Browne was frequently cast as some form of public speaker—a minister, congressman or a professor. Sometimes, he used his voice to hide a more corrupt or hypocritical (comically or otherwise) side to his characters. In Uptown Saturday Night, for example, his Congressman is nowhere near as militant as he seems; and in August Wilson’s Two Trains Running, my only encounter with Browne’s work onstage, his character turns a blind eye to some of the same issues he’s supposedly railing against.

Other times, he used it to present authority that gave way to a surprisingly good natured side. The best example of this is in his Emmy winning role as Dr. Huxtable’s former professor on The Cosby Show. Browne appeared twice, once reciting Shakespeare with Christopher Plummer and more memorably, helping Cliff get revenge on his father, Russell, during a game of bid whist. I can still hear Browne singing “The Rubbing of the Head, The Rubbing of the Head” as he dispenses some well deserved ribbing to Russell’s partner in crime.

Browne also lent his voice to numerous voice over projects. He has been heard as cartoon characters on Spiderman’s animated series and the Disney features Oliver and Company and Treasure Planet. He has also attempted to ruin Black people’s love of pork by narrating Babe and its far inferior sequel, Babe: Pig in the City. Fortunately, it didn’t work.

Browne died in 2007, but we have over 40 years of opportunities to listen to a vocal master at work.
Posted by odienator at 5:13 PM

What are you talking about "far inferior"? Babe: Pig in the City is a near-masterpiece, even better than the original!

Nice tribute to an actor I only vaguely recognize. I should remedy that.

Odie, I think you could/should fill up a huge book with great unsung black actors like Browne. You could do a whole Mumf just on them.

Just to tie in with your Sanford and Son piece, 'member when RLB appeared on that show as Fred's romantic rival for Donna? Funniest housenigga/fieldnigga collision in TV history.

Brian, somehow, despite worshipping the great George Miller, I still have yet to sit through either of the Babe movies. I'll get around to that soon and tell you which of y'all is right. :)

Brian: What are you talking about "far inferior"? Babe: Pig in the City is a near-masterpiece

I knew those were fighting words! Can't agree with you there, though I will say the LOOK of the picture is masterful. George Miller has seriously rubbed me the wrong way with his animal work. I loved Babe (it was on my ten best list) but I found the sequel irritating.

My dislike of Babe: Pig in the City is minor compared to Happy Feet. I hated those minstrel penguins! That movie made me sick, and if Robin Williams does one more ethnic voice, I hope the NAACP puts a hit out on him.

Boone, I do indeed remember RLB on Sanford And Son. He liked the way Donna cracked his toes. I'll never forget Fred's facial reaction when Browne mentions that; it was almost as if he'd said "Donna is better than Superhead."

Well, at least we can agree on Happy Feet, Odie. I went into that hoping it would contain some of the generosity and magic of Babe: Pig in the City but found it insufferable.

When I started my own blog in 2004 and took on the name "Alonzo Mosley", I featured Yaphet Kotto in a "Quote of the Month" feature for that year. Ever since, I've featured twelve quotes for a different Black actor each year. I picked Browne for 2009, so it was especially nice to read your post. Great stuff.

Alonzo, thanks for stopping by! I hope you use Browne's quote about his maid at some point in your quote of the month series. I'll have to check out your prior years of quotes when I get a moment.

L.B. Jones is on video. I remember we had a copy of it at the video store back in the 80's. I get to have a little more fun with Roscoe Lee Browne next week when I write about a film he had a cameo in back in the day. Stay tuned.