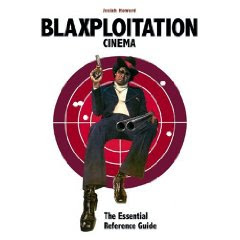 It’s Blaxploitation Day here at Black History Mumf. I’ll be back later to drool over a certain famous player from the era. For now, here’s another homework assignment for you.

Run out and get a copy of Josiah Howard’s Blaxploitation Cinema: The Essential Reference Guide. Howard has interviews with directors like Larry Cohen, Arthur Marks and the man whose name I just love saying, Jamaa Fanaka. He also has reviews of practically every single Blaxploitation movie ever made, plus color posters from many of them. You’ll see posters for Sweet Jesus, Preacher Man, which I’ve seen, and The Six Thousand Dollar Nigger, which I ain’t nevuh HEARRRRRRD of before. The only Six Thousand Dollar Nigga I know is Old Man Johnson that day he hit the number.

If you remember that Leon Isaac Kennedy movie where a bruva gets bloody revenge by using the samurai skills he learned from a Japanese dude on some remote island, but you don’t remember the name, you’ll find it here. Do you remember that flick where the guy strangles The Man with his humongous penis, but don’t remember its name? It’s here too. Looking for Jayne Kennedy on a prison island trying to escape with two other chicks? It's in there. And if you’re stuck for the title of the film where a sistah gets screwed by a cloud of green mist and has to dodge flying beer cans, you’ll find it in Howard’s book.

Alas, if you’re looking for that movie where the extremely busted-looking church lady buys the possessed Stevie Wonder puppet that forcibly eats her out and gets her hooked on the kind of lovin’ only Willie Tyler and Lester could understand, I’m going to have to tell you the name of that one: Black Devil Doll From Hell. Howard can’t tell you everything! But between the interviews with several players in Blaxploitation (including Jonathan Kaplan, director of The Accused), he tells you enough to warrant the price I paid for this book.

Come back later for the Odie Luvs Pam post! Wikipedia should have their ass beaten for not even providing a picture of her with that link. Bastards.
Posted by odienator at 1:27 PM

I ain’t nevuh HEARRRRRRD of The Six Thousand Dollar Nigger before, either, but now it's got me pondering a legal name change.

I saw Penitentiary only last year, finally, and was stunned at 1.) how raw/graphic it was as a prison flick (makes Short Eyes look like shortcake) and 2.) how patiently told it was. I will opportunistically tie fact #2 in with my crackpot thesis that even the "lowest" of '70s screen entertainment amounted to far more intelligent storytelling than today's Oscar contenders (not you, Slumdog--you aight).

But, for real, the big attempted-rape/takedown scene in Penitentiary is about 400% longer than a similar such episode would be in a modern day guy movie. It was one suspenseful moment of brutality/ingenuity.

Sounds like a fantastic book. Let me borrow it

Aw, you beat me to the punchline with the Hey Love commercial link!

Did you know that Penitentiary was (say it with me) Jamaa Fanaka's Masters thesis. It features our pal from Rage In Harlem, Badja Djola. That scene you cite was intense as hell.

Right now, I'm too distracted watching Coffy to write the Pam piece that needs to go up here! Eventually I'll do it. Mmm...Coffy.

COFFY is by far my favorite of Pamela Grier's starring vehicles. I always thought FOXY BROWN was just a rushed, sloppy rehash of the first and in fact I like the star-packed FRIDAY FOSTER better.

Jayne Kennedy in THE MUTHERS...I actually just reviewed this last week! She was really a supporting character to the (even yummier IMO) Jeanne Bell and Rosanne Katon. Trina Parks was really funny again, and it is a shame she hasn't done more film work.

I have been visiting various blogs for my term papers writing research. I have found your blog to be quite useful. Keep updating your blog with valuable information... Regards