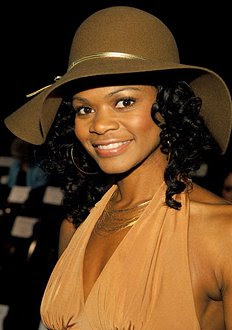 Jonathan Demme's adaptation of Beloved showcases a different actor during each of its three hours. Hour one belongs to Miss Sofia herself, Oprah Winfrey, whose Sethe is seemingly unflappable. Hour two belongs to Danny Glover, whose Paul D serves as the audience stand-in and the most sympathetic male in the film. Hour three belongs to Kimberly Elise who, in her second appearance on the big screen, lays the foundation for the type of performance for which she's become known. In Beloved, her character, Denver, begins the film as a woman battered into her shell by the angry spirit that haunts the residence she shares with her mother. She's bitter, not only about the ghost who haunts the house, but also about not having anyone to relate to, like a sister or a friend. As the film progresses, two people help coax her out of her shell, changing her for better and for worse.

Elise carefully shows us how these new, outside forces change her personality. When Paul D becomes involved with Sethe, Denver's reacts to him (and the quiet he brings to the house) slowly and cautiously. After he breaks through her shell, they encounter a strange woman named Beloved, whom the duo bring home despite the fact she's covered in bugs and drool and sounds like Cookie Monster. Denver takes her on as her pet project, and Elise imbues her character with the feeling that she now has that playmate she never had before. Elise does a fine job conveying this, despite playing opposite one of the most gorgeous and least talented actresses of the past 20 years, Thandie Newton. Beloved helps Denver become more confident, and by hour three, when Elise is given her moment in the story's spotlight, the confident changes she has undergone have become woven in her character's movements and even her facial expressions.

In her career, Elise has been asked to find the obscured inner power of her characters, and she has always done so credibly and consistently. Her appearance onscreen has become shorthand for a woman who is either finding her strength and/or exerting it. Even with minimal screen time, she can convey so much information, whether with a knowing glance or a well-measured turn of phrase. It is a pleasure to watch her work, and the one thing Tyler Perry got right in his film version of Diary of a Mad Black Woman was casting Elise, not only as his heroine, but also as the daughter of Cicely Tyson. It is an apt stroke of casting, as Elise is heir to the types of roles Tyson has played over the years; she appropriates Tyson's way of evoking the sense that all the unshakeable powers of Black women are rooted soul-deep in their being. She rattles with anger, sadness and joy the same way Tyson once did. With her gaze, Elise can burn a hole through you, or coddle you with sweetness. She even looks like a hotter Cicely Tyson.

Elise first hit the big screen in F. Gary Gray's female actioner, Set it Off. Though her performance is a little shaky, she's still convinces us that a woman this weepy and weak could still join forces with her best girls to rob a bank. She and Queen Latifah are the film's complementary extremes. Latifah is all butch firepower, heartless and tough, resisting any attempts to relent or to feel, even as she's being gunned down in one of the greatest onscreen deaths ever filmed. (Her work here is far more Oscar nomination worthy than in Chicago—watch her "OH NO YOU DIDN'T" facial expression as she milks her death scene for all it's worth.) Elise's Tisean has a kid and a heart that's on both sleeves; she feels too much and, through her attempt to toughen up, suffers greatly for it.

In both Diary of a Mad Black Woman and Women, Thou Art Loosed, Elise is asked to veer wildly through a series of emotional moments designed to support both film's spiritual agendas. Both films are underwritten and at times downright preachy, but in neither film does she step wrong. Diary asks us to believe that this woman who had been so brutally dumped by her no good husband might decide to take care of him after he (deservingly) becomes incapacitated. She makes it work by not diffusing her anger so much as accepting some of the Christian values the film preaches to the then underestimated number of Tyler Perry fans. In Loosed, the flashback structure and sequences of T.D. Jakes' ministry (which, despite James' abundant charisma, play like commercial breaks for Jesus) rob the strength from the narrative—do movies understand that sometimes building UP to an event is more dramatic than this flashback shit—but not from Elise's performance. As a sexually abused, drug addicted prostitute, Elise goes for broke, yet every emotion feels earned and thought out by the actress. Neither movie deserves her, but they both are better because of her.

Last week, on cable TV, Elise played opposite my doppelganger, Cuba G., in Gifted Hands: The Ben Carson Story. Sadly, I missed that, but I'm looking forward to seeing it just for her performance. After all, she's gone from Denzel, whom she starred with in three movies (my favorite of which is the cruelly underrated The Great Debaters), to me. The least I can do is watch. 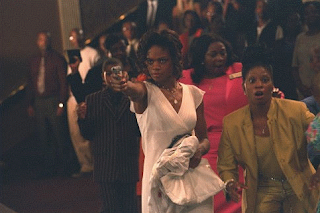 I just love the "OH SHIT!!" expression on the face of the woman next to Kimberly Elise
Posted by odienator at 5:31 PM

Oh wow... I missed this one! And I was just about to complain that Black History Mumf is almost over and you haven't gotten to the Kimberly Elise profile you promised last year!

C&R, if I did nothing else this time around, I was going to do this one. I loves me some Kimberly Elise too!