Happy Valentine’s Day! While you are getting bizzy with your loved one, I am on a plane to Dublin, Ireland to find out the true meaning of Black Irish. So Black History Mumf has gone International! The next seven posts will arrive courtesy of the Leprechaun in Da Hood.

While I sweat and pray on the plane, occupy yourselves with these two post-oochie coochie movies I’ve selected for viewing after the smoke has cleared your bedsheets. This is your homework assignment.

For the romantic: Love Jones.

See Larenz Tate and Nia Long burn up the sheets and slam up the poetry in this lively, hot and engaging love story of two people who think they're just fuck buddies but wind up getting sprung for each other. Features Lisa Nicole Carson and Isaiah "I said faggot, I got fired" Washington as two of those people who just love to point out that your game is not as smooth as you think it is.

Writer/director Theodore Witcher has an ear for his characters' vernacular and stages several excellent scenes where they just sit around and talk about love, life, and literature. This is smart dialogue that rings true and sounds real. It's also filthy, which earns the Odienator seal of approval. 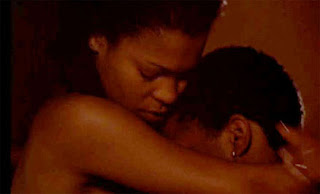 Tate and Long have great chemistry, and their poetry is believably rendered (Tate's first poem is a showstopper), but Witcher makes a big misstep by ruining a perfectly good bittersweet ending at a train station with a lousy coda that's a real cheat. He also introduces a subplot featuring Bill Bellamy which, while amusing, seems to exist only to pad out the running time and offer up stale cliches. But don't let those complaints put you off; neither ruins the movie.

For the unromantic and the perverted: Booty Call.

"If you don't wear a condom, you see a redrum!"
-Wyclef Jean, Gone Til November 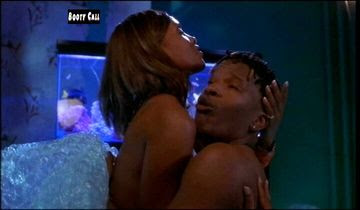 Davidson, as the logical one, makes a good straight man to Foxx's testosterone crazed homeboy. Foxx gets the bigger laughs (his impression filled sex scene is disturbing yet hilarious), but the two complement each other, much like they did on In Living Color. As the objects of affection, Tamla Jones and Vivica Fox hold their own. Fox, as a closet sex freak named Lysterine (for reasons the film is too afraid to fathom), practically walks off with the picture. Insert your own "she wasn't acting" joke here.

Booty Call is at its most deranged when it caters to your inner Eddie Murphy transvestite foot fetish. Director Jeff Pollack, with an assist from that old Rick James-Teena Marie chestnut Fire and Desire, takes us under a table for some kinky accidental footsie dealings between the two male leads and a dog with some nasty mouth habits. It takes a lot to shock me--and this would've done the trick had I not been laughing so hard.