The Content of their Character Actors: Taraji P. Henson 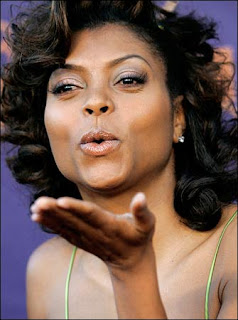 Sports Illustrated has the Cover Jinx, and Black History Mumf has the Oscar night curse. Last year's Oscar night post asked "Can Ruby Dee Win Tonight?" Dee pulled a surprise upset at the SAG awards, and my rationale was that, as the only active Black actress from the old Hollywood days, the Academy would see the symbolism in giving her the Best Supporting Actress Oscar. She's only in American Gangster for a few minutes, but this was the category of people winning for short performances. I felt that if she'd had one more scene in the picture, she'd be more of a lock, but I predicted she would win. A few hours later, Dee lost to Tilda Swinton, an actress who admittedly gave an excellent performance in Michael Clayton. But what if my mentioning Dee here on Oscar night cursed her in some way? Someone wrote me with this very accusation.

I don't possess that kind of magic, because if I did, I'd fill this entire entry with two words repeated over and over: Kate Winslet. Winslet, a usually fine actress who can't keep her top on to save her life, is up for one of the worst movies to ever get a Best Picture nomination, The Reader. Winslet's performance is nowhere near as useless as her nominated role in Iris (where she did absolutely nothing but show her tits—where are Sybil Danning's Oscar nominations for doing the same thing?), but as bad as her illiterate, pedophile Nazi performance is in The Reader, I'm forced to believe the Academy nominated her because she has the last real pair of juicy White hooters in Hollywood. They're fantastic, and they get more airtime in The Reader than in any of her pictures. They just can't act, and therefore should not receive Oscars. If it were about acting, they'd have nodded her for Revolutionary Road, which isn't a good movie, either, but at least she's not relying on her fun bags to gain sympathy. But I digress.

To keep angry folks from writing me if Taraji P. Henson doesn't win the Oscar tonight, I've stuck her in my character actor bucket here at Big Media Vandalism. She deserves to be discussed for the other performances Oscar ignored, as well as the one to which it paid attention. If the Oscars were like the Grammys, Henson would have an Oscar already. The last time she appeared on the show's stage, she sang the hook in Three 6 Mafia's Oscar winning song, It's Hard Out Here for a Pimp.

Henson deserves her Oscar nod for Benjamin Button, if only for bringing warmth to the cold, emotionally detached world David Fincher and Eric Roth trapped me in for three hours. The film is beautiful to look at (I like dark cin-tog), and the effects are first rate, but you can't sell a love story where the filmmakers are afraid of genuine emotion. There is a credible, emotion-filled love story in this picture, and it's the maternal one starring Henson and a shitload of special effects posing as Brad Pitt, not the one between Cate Blanchett and the actual Brad Pitt posing as a special effect. If she loses tonight, and I believe she will, it will be because David Fincher and company failed to provide her lovely character with a worthy exit. She gets figuratively slapped out of the picture, much like Marisa Tomei did in her nominated turn in In the Bedroom (except, well, Tomei literally got slapped out of that picture). SPOILER ALERT: Her character dies, and nobody even mourns for her. Pitt is told that Henson is dead, and the movie just hops back to its shitty love story. I was infuriated.

On paper, Henson's roles look stereotypical and potentially offensive. I submit into evidence Exhibits a through d:

a) A ghetto girlfriend who loves her immature asshole of a boyfriend too much.
b) A pregnant hooker in love with her pimp.
c) A loudmouthed, sassy, ostentatious and sexy Black woman with a prisoner boyfriend and a taste for revenge.
d) A barren Black caretaker tasked with dealing with raising a deserted White kid in 1918 Louisiana.

Just reading these descriptions make me itch, until I think about Henson's take on the material. a, b, and c are all better than d, her nominated performance, and I'm not the only person who noticed this. Perhaps Benjamin Button's nod is to rectify past Oscar wrongs; if so, Henson's nod is in the same boat as Kate Winslet's Reader win will be if my constant mention of her name doesn't work here.

Exhibit a: Baby Boy. In John Singleton's movie, Henson plays Yvette, a round the way girl

involved with a trifling Mama's Boy played by Tyrese Gibson. Yvette loves Baby Boy so much she's willing to get an abortion to keep him, and right after the procedure he takes her car to cheat on her. Yvette is tougher than she appears, however, and Singleton gives her great dialogue and a powerful scene where she, in one line, talks her ex-boyfriend (Snoop Dogg) out of raping her, an event Yvette then uses to shock Baby Boy into offering her some sympathy. Yvette is smart, has a job, and should be running like a bat out of Hell from Baby Boy. Everybody knows an Yvette, and since I'll never be a woman, I'll never understand why they do the stupid things they do to keep a worthless-ass man. Henson brings so much realism to Yvette that, of all the characters she's played, this is the one every hood denizen I know loves most.

Exhibit b: Hustle and Flow. Once again, Henson is cast as a woman who knows just how bad the guy she pines for is, yet sticks around. She's pregnant and hormonal here, and at times seems in fear of Howard's Djay. She's almost petrified when he scares her into projecting her voice to sing the hook in his rap song. Such ironic lyrics—here's a hooker singing about how hard it is out there for a pimp—and Henson nails them. However, it's the scene where she hears her voice back, and she realizes how good she sounds, that is the film's sole scene of realism. Her facial expression, her surprise and her joy wordlessly push an influx of self-esteem into her being. Her line "letting me sing on the demo made me feel real" sounds cheesy, until you hear her say it.

Exhibit c: Talk to Me. Kasi Lemmons loves her strong female characters, but for much of Talk to

Me, Henson's Vernell Watson is employed as comedy relief. She's funny as hell, and won't take any shit from her boyfriend Petey Greene (Don Cheadle). When he cheats on her and she finds out, the scene she plays with a naked, cheating Cheadle is a comic masterpiece, and she slays her revenge scene afterward with three words aimed at Greene: "Now we're even." I kept thinking she was going to fall off the edge of dignity, but then Lemmons gives her a scene where she talks about Petey with his friend/boss Chiwetel Ejiofor. Suddenly, you realize there's more to this woman than her extroverted exterior. By itself it's not a showstopper; in context it's a whole 'nother side to this character. This is my favorite performance of hers.

Exhibit d: Benjamin Button. I snarkily called Henson "Brad Pitt's Mammy" on another site, and I should be slapped around a bit for it. Henson refuses to be a Mammy character, and for the most part, Benjamin Button doesn't imply that. She's a caregiver, and Benjamin Button's arrival on her doorstep fills an emotional need for her, much like Djay's demo or stealing back her car from Baby Boy. Henson looks at that decrepit, ugly robotic baby with a motherly love one could envy. She's also, unlike Mammy, given a love life and a side story. Her strength shines through, both in her interactions with the literally old folks in her home and with her adopted old man of a baby. When she's onscreen, Benjamin Button lives up to the emotions it thinks it employs throughout. When she's gone, the movie's heart remains as dark and clinical as its cinematography, and the film doesn't even acknowledge that she is missed. That'll doom her come Oscar night.

Viola Davis, like Ruby Dee last year, has one really good mother scene in Doubt. The difference there is that one scene is all Davis needs to take home that Oscar. It's the linchpin scene in the movie. I hope she wins, but on my official ballot, I predicted Penelope Cruz. Let's hope Davis' fans don't blame me for mentioning her if she loses!