High School Musical fans and detractors take note: There is nothing new under the Sun. Hollywood has been churning out musicals for teenagers as long as movies had sound. In the 30’s and 40’s, there were the Andy Hardy musicals. The 50’s and 60’s had Elvis movies and the Beach Party flicks. The 70’s had disco disasters like Thank God It’s Friday and mopey musicals like You Light Up My Life. And the early 80’s gave us an ever escalating series of musicals about the hip-hop culture, specifically break dancing and rap. There was Wild Style, Krush Groove, Breakin’, its sequel Breakin’ 2: Electric Boogaloo (still one of the greatest titles to ever grace a movie), and Rappin’, a Mario van Peebles movie that’s worse than Jaws: The Revenge. Perhaps the best of the lot was Beat Street, a Harry Belafonte-produced slice of hip-hop that covered all the bases, from rapping and DJ’ing to breaking, popping and tagging. It doesn’t hold up very well today, but if you were immersed in its topics back in the day, it’s a vivid nostalgia piece. 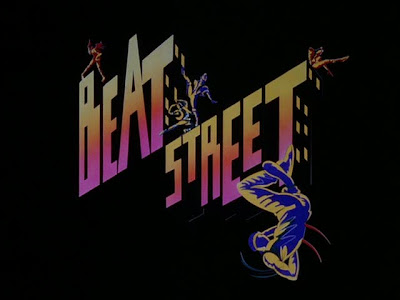 Mickey Rooney’s Andy Hardy never picked up a can of spray paint, but he still shares a similarity with Kenny Kirkland, aka Double K (Guy Davis, son of Ossie and Ruby): They both want to put on a great show for people. Double K is a DJ who works the turntables at local parties in the hopes of someday getting discovered and moving the crowd at a NYC club. His brother Lee (Robert Taylor) is an excellent breakdancer, participating in dance battles with breakdancing crews of the day like the Rock Steady Crew. Double K’s right hand man is Ramon (Jon Chardiet), a graffiti artist whose tag is RAMO and who paints entire cars of the New York City Subway. Beat Street’s love interest is Tracy (Rae Dawn Chong, fresh off that perverted, piece of crap caveman humpfest, Quest For Fire), a dancer/composer whom Double K at first thinks is too bougie…until it looks like he might get some booty.

The struggles and triumphs of these characters are as old as film itself, but Beat Street pounds them into a scenario familiar to anyone who came of age in the 1980’s. I was a junior in high school when Beat Street came out, and its numerous scenes of breakdancing and tagging got the audience at my theater loudly cheering the screen. Like my doppelganger, Cuba Gooding, Jr., I too was a breakdancer whose body was much more limber than it is today. I did windmills and head spins and that move where you propel your body across the floor by kicking up your legs and pushing yourself along with your hands. We called it The Worm, but others called the the Catepillar. It’s the only move I can still do, and after I watched Beat Street the other day, I attempted it in the long hallway that runs between my living room and my master bedroom. When I made it to my room, my lower back hurt so badly that I saw Jesus, the Saints, and every marshmallow in the Lucky Charms universe.

The French Connection is a snapshot NYC in the 70’s, and Beat Street captures the mid 80’s, where subway trains were still loud and rickety and completely covered in graffiti. I could almost smell the subway station pee coming out of my television as my DVD player spun the movie. Making matters even more cringe-worthy yet nostalgic were the fashions worn by the characters and revelers in party scenes. Despite how mismatched my colors were in the 70’s, I’m not ashamed to show anyone pictures of me from that time because I didn’t pick those clothes to wear. The 80’s, however, are a different story, and Beat Street, with its Cazales, Kangos, crazy hairstyles and Adidas track pants reminded me why NO ONE CAN EVER SEE THOSE PICTURES of me from the 80’s.

The story is simple: Double K wants to put on a show and get discovered. Lee just wants to 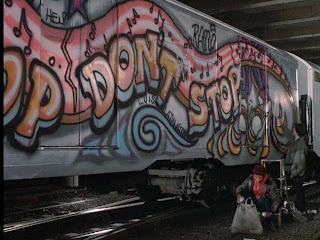 dance and win battles. Tracy wants to show Double K that she can be down despite her composing for classical dance, and Ramon wants to impress his Dad with his artwork, and find the tagger named Spits who keeps tagging over his works of art. Spits’ desecration of Ramon’s murals is the worst thing one tagger can do to another’s art, short of ripping off the other person’s moniker.

The resolutions are also simple: Double K gets to scratch and mix at Kool Herc’s party and in downtown NYC, Tracy conducts her dance piece and shows Double K that their musical styles are not that much different, Lee gets arrested for dancing in the subway and almost gets a foot in his ass by his mother (Mary Alice, who seemed to be everybody’s Mama at one point). Ramon and Spits learn an unfortunate lesson about how spray paint cans conduct electricity. This leads to the big “let’s put on a show” moment; though it is full of life and danceable music, it has its somber origins as a tribute to Double K’s favorite graffiti man.

What made Beat Street work for me, then and now, is not only its depiction of things and places with which I was intimately familiar, but also its energy. The film is wall to wall with dancing and music, featuring appearances by hip hop legends like Grandmaster Mellie Mel (who showed me I still knew all the words to Beat Street’s title track), Afrika Bambaataa and Soul Sonic Force (who performed the Trans-Europe Express by Kraftwerk-based Planet Rock, still the greatest 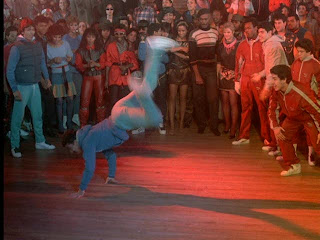 breakdance song ever recorded), the Treacherous Three (whose Santa Claus rap is still funny as shit) and Kool Herc. It also features some of the worst 80’s music I’ve ever heard, including a song by some kid named Andy B. Bad who lives up to his title.

Director Stan Lathan, who would go on to produce The Original Kings of Comedy as well as direct TV shows like Charles S. Dutton’s Roc and Sanford and Son, intercuts documentary footage of New York City’s northernmost borough with his characters’ day to day routines. It’s a visual reminder of a line uttered early in the film by Double K: “This isn’t New York City! This is the Bronx!” Interesting to note that both Double K and Saturday Night Fever’s Tony Manero both feel like “downtown” NYC represents something alien outside of their borough existence. Like I said, nothing new under the sun. Except Beat Street’s jHeri curls. I don’t know where the hell they existed prior to the 80’s.
Posted by odienator at 9:56 PM

Do you know the name of the song that Andy B. Bad plays on audiction?

Digital Noise, I thought "oh this should be easy! All I have to do is go through the end credits on my Beat Street DVD and find out." Well, stupid me! The Beat Street end credits don't provide a song listing. So I thought, well, let me go look at the soundtrack listing on Amazon. No Andy B. Bad. I'm afraid I don't have an answer for you.