Musical Mondays: Me and Miss Jones

Suppose you bought a copy of Carmen: A Hip Hopera on DVD. I’ll attribute this choice to your drug use and your improper fixation on Beyonce Knowles. I won’t judge you; she IS Sasha Fierce. You get home, fire up your DVD player and start the movie. Beyonce shows up, looking as tasty as yo’ Mama’s baked macaroni and cheese. Even better, this is a musical so you’ll be privy to hearing Foxy Cleopatra sing her heart out. And sing her heart out she does, along with Mos Def, Lil Bow Wow and Wyclef Jean. But something’s wrong. That figure on the screen LOOKS like Beyonce, and it’s definitely her ass in the ass clap sequences, but every time she opens her mouth, she sounds like Paul Robeson.

You think it’s your weed. Didn’t you tell your roommate not to buy that shit from that dealer who looked like Bea Arthur? But your roommate, who didn’t inhale, points out that Rah Digga sounds like Busta Rhymes and Wyclef Jean sounds like Aretha Franklin. You both note that Lil Bow Wow sounds like Lil Bow Wow. “Is this from in front of the Beacon Theater?” your roomie asks. “Nah, I bought this from Amazon,” you reply. “Maybe it’s the TV.”

You tweak every single knob on your TV. Nothing changes. You’re looking at people whose singing voices you know well, but when they open their mouths, somebody else’s voice comes out of them. Beyonce as Paul Robeson is ESPECIALLY jarring because now you’re envisioning him in that Single Ladies video. “If you liked it then you shoulda put a ring on it ohh oh ohh!” sings Paul, jumping around in Sasha Fierce’s skimpy outfit and heels.

What I have just described is ridiculous. It is also exactly how it feels to watch Otto Preminger’s 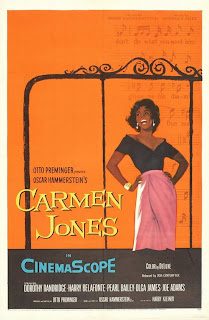 Carmen Jones. Preminger cast a bunch of singers and then had them all dubbed, with one exception, in other people’s voices. How the hell do you dub Harry Belafonte and expect no one to notice? The dubbing is so distracting that it destroys the film, which is a shame because this movie has one of the sexiest depictions of a Black woman ever put on the screen.

Carmen Jones is based on Georges Bizet’s opera, Carmen. Carmen holds a special place in my heart as the first (and thus far only) opera I have ever seen performed live. I’m not an opera fan, but Bizet’s music is irresistible, full of passion and perfectly suited for its temptress of a titular character. Before we went to see the opera, the great love of my life played a CD of it for me, translating every lyric as it was sung. She sat next to me, almost whispering in my ear what was being said, like my own personal Babelfish. It made me love the opera even more.

I’ll bet the lyrics I got were a lot better than the ones written by Oscar Hammerstein II for Carmen Jones. Keeping Bizet’s music, Carmen Jones updates the story, translates the lyrics to suit it, and then casts it with an all-Black cast. The all-cullud cast treatment wasn’t a new phenomenon when Jones debuted on Broadway in 1943; 13 years earlier, The Green Pastures adapted Bible stories, colorized them on Broadway and won the Pulitzer. Eight years earlier, DuBose Heyward and George and Ira Gershwin unveiled Porgy and Bess, whose success Oscar Hammerstein II must have been trying to duplicate with Carmen Jones. Both are operas and both contain that ignorant pseudo-patois White writers put into the mouths of Black characters for decades. I’ve known plenty of dumb Black people in my time, but I’ve never heard any of them sound as unnatural as this.

Carmen Jones was a hit on Broadway in 1943, and in 1954, director Otto Preminger brought it to the screen using the new technology called Cinemascope. As Carmen, Preminger cast perhaps the finest Black woman to ever grace a Hollywood screen, Dorothy Dandridge. Preminger also cast Harry Belafonte as Carmen’s doomed lover Joe (why is the guy’s name ALWAYS Joe in these all-cullud musicals? See Cabin in the Sky) and Pearl Bailey and Diahann Carroll (in her debut) as Carmen’s friends. These are all singers, and excepting Pearl Bailey, they are all dubbed. The first time Harry Belafonte opens his mouth, and some opera dude comes out of it, the movie lost me.

As a lover of musicals, I know actors are dubbed all the time. But this is different. Deborah Kerr could have sounded like a deranged nightingale on crack when she sang, but I wouldn’t know because I never heard her. I always heard Marni Nixon. I do know what Audrey Hepburn sounds like (that’s her singing Moon River), but her dubbing in My Fair Lady didn’t bug me because she isn’t a singer. Julie Andrews IS a great singer with a distinctive voice, and if she were dubbed, it would result in the same uncanny valley-esque feeling I got watching Harry Belafonte and not hearing the voice that yells out “DAY-O!” I understand that this is an opera, so they should have cast someone who could handle the singing, or cast an actor like Sidney Poitier and dubbed him (Preminger did exactly that, in Porgy and Bess). 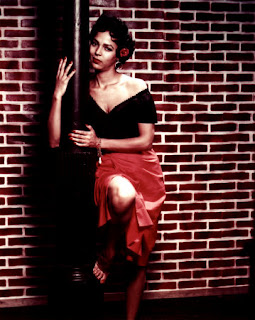 Dorothy Dandridge was also a singer, but when I saw Carmen Jones the first time, I wasn’t very familiar with her work as such. Her dubbing bothered me less, especially since she gives a fantastic performance, one that garnered her the first Best Actress Oscar nomination ever bestowed on a Black woman. In 1954, the censor still had a tight rein on how sexy a woman can be, and a woman of color this hedonistic and unbridled must have ruffled some feathers. Carmen Jones is one HOT mamacita, burning as hot and bright as the red flame that flickers in Saul Bass’ opening credits. You can always tell when the director is screwing the lead actress, because she seems to burn a hole through the screen when the camera is on her. Preminger and Dandridge carried on an affair for four years, which started during the making of this film. It must have been a hot one.

The plot is something like the opera. Carmen is a free spirit who is attracted to men she can’t have. If they pursue her, she’s not interested. As a parachute maker, she’s surrounded by men, one of whom is Joe, a pilot-in-training. Joe is betrothed to Cindy Lou, a girl who looks busted compared to Carmen but who loves Joe and will be true to him. Like the Mounties, Carmen always gets her man, so Joe’s attempts to resist her are futile. Once she gets Joe, as her song says, she grows tired of him, preferring to move on to boxer, Husky Miller. Joe’s jealousy gets the best of him, leading him to fulfill the prophecy Carmen foresees when her cards are read.

Preminger was notorious for giving the finger to the Production Code. The year before Carmen Jones, his film The Moon is Blue was condemned by the Legion of Decency and refused a seal. Preminger put the movie out anyway, which was unprecedented. In Carmen Jones, he’s really poking his finger in the proverbial eye. Dandridge is allowed full range and control of her seductive wiles, getting involved in a vicious catfight, flirting with Belafonte in front of his steady Cindy Lou (Olga James), and stripping down to reveal a black bra and zebra striped panties. “Zip me up,” she tells Belafonte as she thrusts her ass in his direction. Her seduction of Belafonte involves her reaching to undo his pants, something I’d never seen done in a movie of this era, and the film’s dialogue about her way with soldiers is surprisingly frank. For the ladies, Preminger shoots Belafonte shirtless and oiled up (at least it looks that way) for several minutes as he lip-synchs his love for Carmen.

Dandridge delivers her dialogue like a serious Mae West. It’s kind of funny to hear, but it’s also completely believable and quite arousing. Belafonte does a fine job of showing his lapse into obsession, though his last scene is rushed and doesn’t work. Carroll and Bailey are funny as gold-diggers latching on to the boxer who vies for Carmen’s hand, and Bailey, just by virtue of singing it herself, gets the film’s best musical number. Singing about drums (RAGING STEREOTYPE ALARM!!!), Bailey dances in the most energetic number the film offers.

Hammerstein’s lyrics are rather dismal, sounding more like the parodies I do here at Big Media Vandalism than a serious musical. Occasionally, he surprised me with a great lyric or two, and his take on Habanera is good because it’s pretty faithful to the original. Most of the time, his attempts to make it sound ethnic fall horribly flat. When Carmen gets the card of death during her reading, Dandridge opens her mouth and this panicked White mezzo-soprano sings out “DE NIIIIINE! LAWDY DE NIIIIINE!!!” Hammerstein’s version of the Toreador song, here called “Stand Up and Fight” is a travesty.

Dorothy Dandridge holds Carmen Jones together, and since she’s onscreen for most of the movie, the film is watchable despite its flaws. She certainly deserved her Oscar nomination, and I wish Hollywood had found better things to do with her. As a side note: Halle Berry, who not only resembles Dandridge (Dandridge is hotter) but also hails from Dandridge’s home town of Cleveland, Ohio, does a wonderful job in the HBO movie, Introducing Dorothy Dandridge. I’ve never been high on Berry as an actress, but both she and Brent Spiner are fantastic in this movie. Check it out after you watch Ms. Jones.
Posted by odienator at 4:57 PM

Recently revisited this for the first time in years thanks to Netflix Instant, and I agree entirely that the dubbing was distracting and pointless.

One other flaw, which is no fault of anyone involved; I couldn't get THE BAD NEWS BEARS out of my head during the songs. :)

Yes, Hal, The Bad News Bears introduced us to Carmen, much like Looney Tunes introduced me to Franz Liszt.