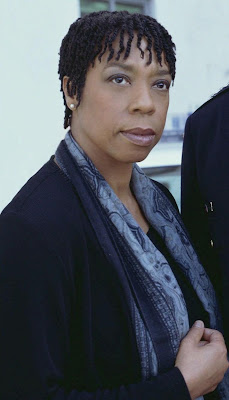 Ten years before Spike Lee used Samuel Yell Jackson’s radio DJ as the omniscient voice of Do the Right Thing, Lynne Thigpen used hers to taunt the titular gang of Walter Hill’s The Warriors.  As the Warriors travel through rival gang territory en route to their Coney Island home, Thigpen comments on the action from the safe haven of her radio station:
“Latest sports news off the street, boppers: The Baseball Furies dropped the ball, made an error! Our friends are on second base and trying to make it all the way home. But the inside word is the odds are against them.” 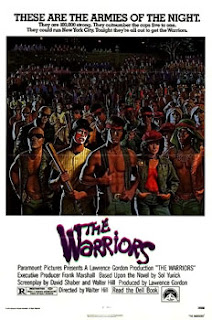 For mystique, Hill wisely kept most of Thigpen off-screen, focusing only on her lips as she reports on the action. But the voice was unmistakable, so no further visualizing was necessary. Hill also used her as a train conductor in a cameo in 1984’s Streets of Fire, an appropriate bookend as Fire was Hill’s unsuccessful attempt to re-create some of the visual texture and effectiveness he employed five years prior.
Despite the rest of her appearing in over 40 films in 30 years, Cherlynne Thigpen’s voice remained an integral part of her legend. She sang on Broadway in musicals like TinTypes and Godspell (the former earned her a Tony nod, the latter she reprised in the movie version), narrated numerous audio books, and helped kids of all ages find out Where in the World Carmen Sandiego Was. She played a judge on King of the Hill, LA Law and in Anger Management. She could also play judgemental, as she did on All My Children and in that classic piece of propaganda bullshit, Lean on Me.  It wouldn’t be Black History Mumf if I didn’t say something about John Avildsen’s Rocky Meets To Sir With Love. Lean on Me is one of the most enjoyable bad movies ever made. I loved it so much I put it on my ten best list that year. 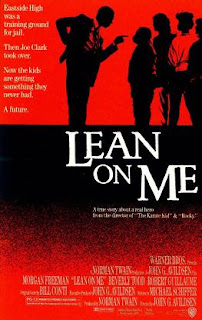 Lean On Me pits Thigpen against another actor known for his voice, Morgan Freeman. This time, Freeman isn’t driving any White women to the Piggly-Wiggly; he’s driving Black and Latino badasses out of dear old Eastside High in Paterson, NJ.  Thigpen plays the angry parent of one of these troublemakers, and the film demonizes her to the point where she should have horns growing out of her head and fire shooting out of her nostrils. But Lean on Me needs her to be all that and more, because she’s up against a character the film idolizes like a lovestruck little girl. To make her impression, Thigpen relies on her voice, her face and her attitude. It’s a cartoon performance, but you can’t play Lady MacBeth opposite Yosemite Sam.
Freeman plays real life Eastside High principal Joe Clark, and the movie turns him into an infallible one-man crusade, cleaning up the school with the help of the most hated Black actor in Ghetto movies, Michael Beach. Sistahs hate Michael Beach almost as much as they hate me, because whenever he shows up in a movie, he is always trifling. Here, Beach is Mr. Darnell, Clark’s head of security, and the reason why Thigpen manages to get Clark thrown in jail. Thigpen beams as they take Mr. Clark away, and you’re not sure whether you should hiss or cheer because Freeman is a real asshole the film bends over backwards to make you love. Clark fumes in jail while some of the students treat Thigpen the way she treated The Warriors.
Before that, Clark screams at people for an hour and a half, scaring the shit out of, and school spirit into, the students. He treats his employees no better, firing a snooty White teacher and almost causing his music teacher to have a heart attack because she Teddy Riley’ed up the school song. The reason for his jailing is ironic because, before Clark hired Mr. Darnell as his chief of security, he treated the former teacher like shit. Beach stands up for himself, tossing a desk before leaving. Thigpen executes a sneak attack on the school, whose safety laws Clark and Darnell have violated by chaining the doors (something they did in my public grammar school quite often). Clark screams for Mr. Darnell to remove the chains because the fire chief’s coming, and Thigpen gets it all on cassette tape.
Thigpen puts a sinister spin on some of the saner dialogue in Lean On Me. While Clark berates everyone around him, Thigpen threatens the mayor into putting her on the school board so she can toss “Crazy Joe” out on his keyster:
“You think I got an attitude. Well, let me tell you what I think. I know why you like Clark. He's a guard dog. Does your dirty work. Keeps the black folk in line - that's fine. But you've got to get re-elected. I've got enough folks lined up with me to give you a DAMN hard time, and I will get more. I will organize. I will beat the streets.”
While Clark’s intentions are noble, his methods are extremely coarse and alienating. No one would stand up for him after the way he treats his allies, yet the film would have you believe these methods wouldn’t cause everyone to be outside with Thigpen. Even though Robert Guillaume is his old friend and current boss, Clark treats him like an underling before TV’s Benson grows some balls. “Contrary to what you think, I’M THE HNIC!” yells Guillaume in one of the film’s infinitely quotable, and consistently terrible, lines of dialogue.
Thigpen goes big in her role because Freeman swings for the fences, literally in one scene when the filmmakers hand him a bat. This is simultaneously a brilliant and a bad performance by Freeman—Oscar worthy, I say! You don’t know what to think, but you can’t keep your eyes off him—except to catch Thigpen glowering at him.
Even though this piece is supposed to be about Thigpen, I must rest my case for loving Lean On Me by presenting Freeman’s version of tough love. After being thrown out of school, a young man comes back, begging Mr. Clark to let him back in the school lest his mother kill him. Clark drags the kid up to the roof of the high school, and unleashes a torrent of abuse that would be absurdly misguided if it weren’t so goddamn hilarious. He tells the boy to jump off the roof.
Freeman: I don’t think you changed a thing. Go on, jump!” (pushes kid)
Kid: I don’t wanna jump!
Freeman: Yes you do! You smoke crack, dontcha? Look at me boy! Don’t you smoke crack?!
Kid: Yes sir.
Freeman: You know what that does to ya? Huh?
Kid: No sir.
Freeman: It kills your brain cells, son! It kills your brain cells! Now when you’re destroying your brain cells you’re doing the same thing as killing yourself, except you’re doing it slower! Now I say if you wanna kill yourself, don’t fuck around with it! Go on and do it expeditiously! Now go on and jump! JUMP!!
Kid: OK, Mr. Clark! (Jumps off the roof)
Freeman: OH SHIT, HE JUMPED!
OK, the kid jumping is my infusion of reality, but everything that precedes it is verbatim. Hear for yourself.  That Freeman can convincingly use fuck and expeditiously in the same breath makes me giddy inside. 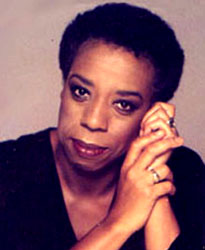 Lynne Thigpen’s last role was sentencing Adam Sandler to the Anger Management she should have recommended for Lean on Me’s Joe Clark, In 2003, she died suddenly of a cerebral hemorrhage. She left behind a body of work that included Tootsie, Roseanne, Law and Order, The Cosby Show and Michael Mann's The Insider. I’ll miss her voice most of all, so I leave you with her closing quote from the Warriors.
“Now for that group out there who had such a hard time getting home: Sorry about that. I guess the only thing we can do is play you a song.”
Your Homework Assignment:
Here's Ms. Thigpen singing a song for you.
Posted by odienator at 1:36 AM

Excellent piece, as usual. Damn. "The Warriors." "Lean on Me." You often forget how much these films you saw as a kid have stayed with you over the years. I clearly remember being a kid at the turn of the '90s and using Morgan Freeman's "do it expeditiously!" line on friends who had a habit of taking all damn day in the 7-11 or whatever.

Funny, too, how you'll recognize character actors like Lynne Thigpen - even if just by face - before you can recall half the people you've met in life...

Scott, I say if you don't want to remember somebody, don't fuck around with it! Go on and do it expeditiously!

If you go to IMDB, this speech is listed in the quotes section COMPLETELY WRONG. I bet someone typed it from the TV print or something.