Not So Super Negroes

Richard Pryor has a great joke in Live In Concert where he awakens from his heart attack in an ambulance full of White EMT’s working on him. In his groggy, resuscitated state, he thinks he’s dead. “Ain’t this a bitch?” he says, “they sent me to the wrong goddamn Heaven!” That’s the same reaction fanboys had when they discovered that Idris Elba was cast as Heimdall, a Norse god in the upcoming Marvel Universe movie, Thor:  He’s in the wrong goddamn Heaven. The only Norse gods I remembered were Loki and Odin, so I had to go look up Heimdall. Wikipedia tells me that Heimdall is “the whitest of the gods.” Here’s a picture of Idris Elba, in case you were one of the fools who DIDN’T watch The Wire. 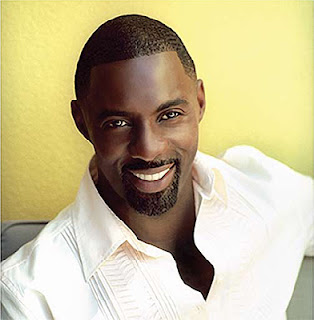 The fanboys are mad because the only thing Norse and Negro have in common is that they’re five letter words beginning with N.

Kenneth Branagh, the director of Thor, has partaken in the race switcheroo before: Robert Conrad’s Jim West was played by The Fresh Prince of Bel-Air in the fiasco that was the Wild, Wild West movie. That caused little controversy because fanboys weren’t old enough to know what Wild Wild West even was. This, however, was blasphemy. If he were the whitest of the gods, that meant he had to the purest Aryan muthafucka there is. Heimdall is White with a capital W, White and pure, like Ivory Snow soap powder. For them to cast a bruva in this role was a slap in the pointy hood!

In response to this, Idris Elba appeared on British TV to dispute the uproar. He said that those who protest have no problem believing that there’s some huge White man with a magic hammer running around, yet they can’t accept him being cast as the NordicNig. I wish Elba had read that Wikipedia entry, because he would have had some serious ammo to shut those whiny bastards up. From that site, I learned that:

1. Heimdall is a horn player
2. Heimdall hangs in his crib, Himinbjörg, drinking mead all day
3. Mead is a cheap ass wine made out of honey and water, and has as much alcohol as malt liquor, if not more.
4. Heimdall has GOLD TEETH.
5. Heimdall has a tricked out horse with gold hair, the horse equivalent of rims.

Now if dat don’ soun’ like a stereotypical Negro, I will eat my hat! Plus, didn’t all humanity come from Africa in the first place?

I was about to end this piece by saying that these friggin’ fanboys should stop worrying about some fake ass comic book hero and start doing things like getting a job, moving out of their parents’ basements, getting off the goddamn Facebook, Twitter and video games and finding some pussy (or dick—we’re equal opportunity and non-judgmental here at Big Media Vandalism). BUT THEN I had a horrible, awful thought:

Have you SEEN Black superhero movies? They’re atrocious! Have a look:

Meteor Man: Robert Townsend follows up on his Hollywood Shuffle promise and makes a Black Superman movie. He plays the lead, a man who gets hit by a meteor, and unlike Stephen King in Creepshow, he gets some good out of it. Seeing Townsend battling his Hollywood Shuffle nemesis Roy Fegan is fun for us fans of his work, and the film is full of Black stars like Bill Cosby, Eddie Griffin, Robert Guillaume, Marla Gibbs, LaWanda Page and Don Cheadle (with yellow hair!!!). It even has a clever power for our hero: He can absorb a book’s knowledge like Number 5 in Short Circuit. The problem is the movie is a mess, full of plot holes and confusion about its tone. There are some funny moments in it, as in all of Townsend’s movies, but there’s so much wasted potential that I walked out feeling depressed. The one truly inspired thing Townsend does is cast Luther Vandross as a mute hitman. Luther conveys much without using that awesome voice of his, but we see so little of him that it becomes just another wasted opportunity.

Blankman: Damon Wayans scored comic points for some by playing Handi-Man on In Living Color. In an attempt to cash in on that, Wayans plays what imDB refers to as “a simpleton inventor with a bulletproof costume and a low budget.” They make it sound so much better than it is. David Alan Grier, the Blaine to Wayans’ Antoine, is more interesting as his brother and sidekick “Other Guy,” but Wayans’ attempt to bring a ghetto (in every possible definition) hero to the screen is unfunny, boring, and unwilling to exploit Blankman’s potentially interesting mental state. On the plus side, this movie has Lynne Thigpen, who’s smart enough to get shot early in the movie. It is also probably the cleanest movie Damon Wayans has ever done.

Hancock: Let me see if I get this straight: Hancock is a homeless, drunk superhero who destroys property and acts like a genuine ass. Yet, people still live in the town Hancock occupies. Never mind that he’s more of a danger-slash-menace than the criminals. I guess that’s because Hancock lives in L.A., and if earthquakes, gangs, and Botoxed Hollywood types couldn’t get people to leave, one superpowered lush isn’t going to either. And wait—Hancock’s weakness…is a White woman. From South Africa. It would be a lot more subversive if it didn’t come out of nowhere. To quote the R-and-B classic Heartbeat: “Now you know this just don’t make no kind of sense!”

To clear my palette, I have to mention a GOOD Black Superhero: 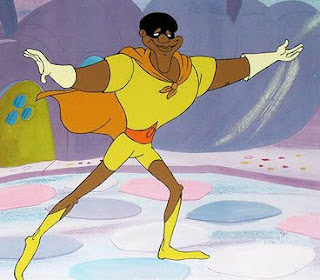 The Brown Hornet!
The Brown Hornet appeared on Fat Albert, and was the reason they got rid of all those catchy songs that used to show up at the end. He looked like Bill Cosby and, as voiced by the Cos, had a very interesting way of speaking. You could...imitate himmmm...all day. He and his sidekick, Stinger, drive a bee-shaped spaceship, fight crime in space and always "naturally escape unharmed" from whatever trap they find themselves in. He battles space witches and graffiti artists while the Cosby Kids cheer.

Hancock should have killed any attempt to give a Black man superpowers, but it made money, so now we have Idris Elba in Thor. Perhaps the fanboys who protested were trying to make the same point I am making, that outside of the Brown Hornet and Richard Pryor’s classic SuperNigger routine (“who, disguised as Clark Washington…”), Black superheroes make bad movies. Perhaps?

I was always baffled by The Falcon, who, if not a sidekick, then was definitely a side-hero, to Captain America. His was a character that defined metatextuality (black kid from the projects soaring above the liberal white man), but, nonetheless, never got truly developed. Similar case could be made of Luke Cage, and his relationship to Iron Fist.

In fact, Marvel, for all its supposed multi-culturalism, treated the African-American male, in the seventies and most of the eighties, as, for lack of a better analogy, a man-Friday. Which is only this side of slavery. (Its treatment of the African-American woman was as a disco-mama [with super=powers, natch]).

This has always been a problem for me. A truly black hero, one who invades the consciousness despite his ethnicity, has yet to happen in mainstream comics. I know it was a joke, but it should not have been. Donald Glover would have been a fucking perfect Spider-Man!

'Meteor Man' had all the hallmarks to me of an artist's vision wrecked by a studio. If you peek through the cracks, you could see the bones of a good movie there, but I'm afraid the best parts ended up on the cutting room floor.

Maybe someday Townsend should do a director's cut. I would love to see what kind of movie he *wanted* to make.

It floors me how those same "fanboys" more than likely said nothing about "whitewashing" of other movies like Last Airbender, Prince of Persia...but cry bloody murder in this situation. We don't know that the Norse theology hadn't been whitewashed itself, much in the way Christianity has been today, and given the point you made about all life originating in Africa...then the possibility of a Norse diety being African isn't as far-fetched as some would thing...so, big effin' deal.

In any case, T'Challa (The Black Panther) has been the best attempt at a super-hero of African descent to date (aside from those created by authors/artists of African descent a la The Brown Hornet), being that he had power within his own right, and not being the side-kick of another character. (much to Ali's point) BUT even still he wasn't born in America (not many successful heroes were), was from a fictional African country which even people of African descent would deem improbable. Wakanda had very loose parallels to existing countries and factual information or realistic traditions, religions or beliefs (unlike Thor). We'll see what happens when the BP movie comes to life...