By Odienator
(click here for all posts, and don't forget the first part of this double feature!)

With all this crazy healthcare shit going on, I thought it appropriate to bring up Vondie Curtis-Hall’s Gridlock’d. It’s a tale of two junkies who decide, after their partner overdoses on New Year’s Eve, to try to get clean. But that’s not so easy for those who don’t have any insurance. Curtis-Hall puts his two male leads through the wringer, sending them from one gov’ment office to another. If that weren’t enough, in this After Hours-like film, the director himself plays a drug dealer named D Reeper who frames the duo for murder before trying to kill them. 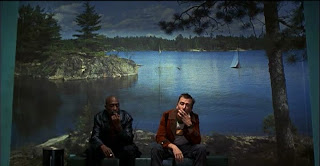 Strech and Spoon, the two leads, are played by Tim Roth and the late Tupac Shakur respectively. It’s an odd pairing of actors rounded out by the character who instigates the run to get clean, Cookie. Cookie is played by Thandie Newton, one of the finest looking and least talented actresses around. The best thing about Gridlock’d is that she spends most of it unconscious, though her few awake scenes are tolerable enough. Roth and Shakur are both quite good as heroin addicts, playing off each other with a combination of comedic timing and outright frustration. Roth is the more unrestrained of the two, and Shakur makes for a convincing voice of reason and straight man.

On New Year’s Eve, Cookie decides to try heroin, which is not her usual drug of choice. The trio are slam poets at a club who are up for a potential record deal. That changes when Cookie winds up in a coma after overdosing. Spoon and Stretch try to hail a cab to get her to the hospital. No cab will pick up someone who looks like Pac, so Stretch tries to hail a cab with Spoon and Cookie out of sight. When he gets one, and Spoon comes out to join him, the cab pulls off. Their attempt to call 911 is worthy of Flavor Flav’s famous song about the emergency number: Spoon tells the operator “a White lady’s been shot,” which is the quick way to get an ambulance in the ‘hood, but then he fucks up by adding “and there are a buncha Black people running around talking about revolution!”  They wait in the phone booth for a while. Nobody comes to help.
After dragging Cookie through the streets to the hospital, Spoon is met with his first bureaucratic obstacle of the night. An uncaring ER nurse played by Elizabeth Peña asks Stretch questions about Cookie he can’t answer. When he freaks out—after all, Cookie is laying on the seat in the ER practically dead—the nurse curses him out, tears up the ER application he tried to fill out and screams “well I should just let the bitch DIE!!!”
A quick aside here. You might find this scene unbelievable, but lemme tell you a story. I was cutting up an onion in my apartment a while back and the knife slipped and went through my hand. The outcome was like a Brian DePalma movie, blood flying everywhere while the soundtrack blared string sections being abused by a conductor. I couldn’t stop the bleeding, so I did the one thing most dying people do: I called for my Momma! Well, actually I CALLED my Momma on the phone, and she agreed to meet me at the hospital, which was on the corner of her block. I wrapped  a T-shirt around my hand and walked the four blocks to the ER. When I got there, the entire T-shirt was red. I went to the desk and there was a pissed off sistah sitting there. She was annoyed that I’d interrupted her phone call, presumably to her trifling ass man.  She threw some paperwork and a clipboard at me.
I’m now bleeding all over the floor, but I fill out the paperwork. When it got to my insurance part, I realized I’d forgotten my wallet. My mother said “give me your keys and your father will drive me to your house to get the wallet.” I gave her my keys. While Mom was gone, I went back up to the desk to explain the situation. I told her I had Blue Cross and even gave her the information I knew on the form, but since I didn’t have my card, she wanted nothing to do with me.
“I think I’m bleeding to death here, lady!” I said as calmly as I could. “My Mom drove to get my wallet. I live four blocks away. Can I please get something—a bandage, a tourniquet, something?!! I am really in trouble.”
“HELL NO, NIGGA!” said pissed off ER Desk Sistah. “No card, no service!” she said. She did the sistah neck roll as she said this. “Either gimme your card or get the hell out of my ER and go to the STATE HOSPITAL!!”
In my mind’s eye, I could see myself choking this heffa to death with my chopped up hands. (Hey, this IS a Brian DePalma movie! Misogyny is expected, folks.) Instead, I left the hospital. My Mom returned to find me bleeding all over the parking lot. I’ll spare you the part where my Mom curses the ER woman out so badly that we have to go to a different hospital to get service. To quote Slick Rick “shit like this happens every day.”

Stretch and Spoon don’t have Odie’s Mom in Gridlock’d, so they have to flag down a sympathetic doctor who puts Cookie into a room. He returns to tell them that she may not make it. In their panic, the duo decide they want to get clean. To get money, Stretch and Spoon sell camcorder boxes full of bricks. They sell one for $83 to an unseen  guy with D Reeper on his Ohio License plate. When Stretch disses D Reeper’s Mom, Curtis-Hall makes a dramatic entrance, threatening to kill Stretch before the cops show up.
Down at rehab, the guys meet up with Koolaid, their supplier. He tells them they need a Medicaid card to get in. Since they don’t have one, they’ll need to go to the welfare office to get one. But first, they go with Koolaid to get high. They’ll need that high because, at the welfare office, they discover that it can take weeks to get a card. Fearing that if they wait, they’ll chicken out, Stretch and Spoon try to follow the trail to either a quickie Medicaid card or a different rehab center. Unbeknownst to them, this trail is covered in red tape.
They fall asleep at a different rehab, and miss when their number is called. The woman at the desk won’t help them. “You have to choose another number,” she says. A blind man played by Johnny Fever himself, Howard Hesseman, gives them the extra number he usually takes for his seeing eye Rottweiler, and when it comes up, Stretch and Spoon discover this rehab no longer accepts junkies. It’s alky only now. When they go down to the new Medicaid office, they find MAD TV’s Debra Wilson having a conversation with another sistah about her man. When they interrupt her, they are told the Medicaid office moved, something the guard could have told them at the front desk. When Strech protests, Wilson treats them the way my ER clerk treated me.
Frustrated, they go back to get high again with Koolaid and discover that he and his girl, played by Lucy Liu, have been roughed up by D Reeper. Stretch and Spoon saw him when they were leaving Koolaid’s earlier. D Reeper was accompanied by his henchman, Tom Towles from Henry: Portrait of a Serial Killer. “My client was upset that his product didn’t come with the batteries,” he says of the brick-filled camcorder box. Stretch and Spoon run off, only to return later to find Koolaid beat up. The next time they return to Koolaid’s, they’ll find him and Liu dead. That doesn’t stop them from getting high while the dead bodies are laying on the floor.

Once these murders have been committed, the cops put out an APB on Stretch and Spoon, whom they encounter leaving Koolaid’s apartment.  The race to get off the street and into rehab becomes imperative. It becomes a necessity when D Reeper and his pal start gunning for them too. Between the bureaucracy of welfare, Medicaid and rehab centers, and the imminent death promised them by D Reeper, Stretch and Spoon have their hands full. It culminates in a harebrained scheme where Spoon gets the now injured Stretch to stab him so they both can enter the hospital together. Once inside, they can try to get clean. The only problem is that Stretch is not really good at being stabby. Watching Roth repeatedly stab Tupac is the comic highlight of this morbid movie.
The ending of Gridlock’d is a tad ironic. Curtis-Hall frames Roth and Shakur in the foreground and Newton in the background. She’s in a phone booth across the street, calling home looking for Stretch and Spoon without realizing they are in the same building she’s just left. It’s the message she’s leaving for them that provides the irony, along with the location of Shakur and Roth. The film ends with Shakur’s government name in the film, Ezekiel Whitmore, being called by an offscreen voice. “It’s about time,” we hear him say as Newton walks off in the background. 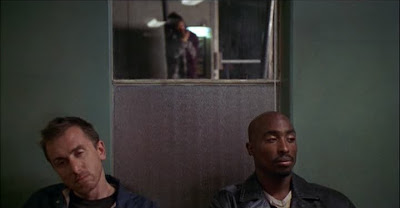 Gridlock’d is a dark comedy that anyone who has had to deal with a gov’ment agency (especially when healthcare is involved) can appreciate. Curtis-Hall gives small roles to recognizable faces, including those of directors John Sayles and Kasi Lemmons (Curtis-Hall’s wife, who cast him in Eve’s Bayou as well). He generates tension and suspense in several scenes, and he gets fine work out of his actors. Tupac has always had a wonderful screen presence, and Roth plays idiotic mania very well. Newton does fine in her musical/poetry performances.

During the closing credits, the trio perform a song whose chorus is “Life is a Traffic Jam,” which accurately describes the life of lower class people having to deal with shelters, welfare, social security, veterans administration, and any number of institutions that don’t really seem to care. Hesseman’s blind man does what I’m sure these people would like to do: He goes batshit, destroying a gov’ment office with his cane while his seeing eye Rottweiler holds the cops at bay. It’s Gridlock’d’s one moment of genuine catharsis. That the dog’s name is Nixon doesn’t hurt either.
Posted by odienator at 12:26 AM