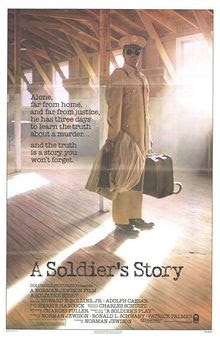 The mystery in A Soldier’s Story never compelled me. I knew whodunit early on, and I don’t think director Norman Jewison and screenwriter Charles Fuller intend to generate much suspense over it. The bigger question is whydunit, which is answered by the flashbacks that make up both A Soldier’s Story and the Pulitzer Prize winning play from which it is adapted. Both the film and the play open with the gunshot murder of Sergeant Waters, the commanding officer and baseball coach of an all Black regiment in 1944 Louisiana.
Though Sergeant Waters has his favorites, he treats most of his men even worse than the Whites In town would treat them. He calls them shiftless and lazy niggers, and is especially harsh to darker skinned Southerners like C. J. Memphis, a talented blues guitarist and ace baseball player. Memphis is a musician and a sports hero, two things that guarantee boatloads of booty, but he is COUNNNN-TREEEEE. Like a chicken coup. Sergeant Waters, a light-skinned, well educated Negro, hates the fact that Memphis, like many other of his men, is willing to shuck and jive to stay alive. He calls it yassir-bossin’. Of course, Sergeant Waters, a man in a rather high position for a cullud person, had to do his own yassir-bossin’ to get there. Educated as he may be, he had to defer at some point to racist, White officers in order to climb the few steps up the ladder the segregated US Military would allow. He can do plenty less yassir-bossin’ nowadays. How quickly they forget.
Right before Sergeant Waters is gunned down, he cries out “they still hate you!” We assume he is talking to his murderer, and in an ironic way, he is: Sergeant Waters is talking about himself. 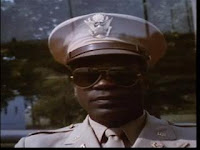 The army calls in a lawyer named Captain Davenport (Howard E. Rollins, Jr.) to conduct an investigation. The victim would have liked Davenport—he’s no nonsense and obviously well-educated. He’s also something of a blank slate, numb almost, a tactic that would have helped Sergeant Waters had he considered it. After numerous viewings over the years, I’ve concluded that Davenport’s rigid state of coolness is a defense mechanism. Everybody stares at him because nobody has seen a Black officer with this high a rank in the Army before. Some White soldiers won’t even salute him, which forces him to have to call them out. Even Colonel Nivens (Nathan Arizona himself, Trey Wilson) tells Davenport that if he’d known his skin color, he would have called off the investigation. Having your rank and achievement constantly tested, disbelieved and shat on has to make you present a more enigmatic front as protection. After all, as my favorite racist joke in Truly Tasteless Jokes goes: What do you call a Black lawyer? You know the answer. You’ll hear it a lot in A Soldier’s Story.

Davenport interviews Sergeant Waters’ platoon. There’s Corporal Ellis (Robert Townsend), who also serves as Davenport’s personal Jeep driver (“I’ve only flipped this over twice,” he assures Davenport.); Private Wilkie (an excellent Art Evans) who was once both Sergeant Waters’ right hand man AND a higher rank; Corporal Cobb (David Alan Grier), Private Henson (William Allen Young), Private Smalls (David Harris) and his partner from Alabama, Private First Class Peterson (a young but still fiery Denzel Washington). C.J. Memphis (Larry Riley), Peterson’s fellow ‘bama and Sergeant Waters’ constant target, committed suicide in the jail cell Sergeant Waters threw him in after he finally worked up the courage to fight back. Scratch him off the whodunit list and push him near the top of the whydunit one. 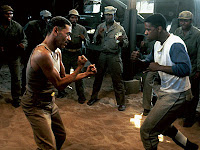 The first time I watched A Soldier’s Story, I kept watching the flashbacks looking for clues to the mystery. After reading the play, I realized that I’m looking for the wrong thing. I should be focusing on Sergeant Waters, on what he says and how he reacts. In one scene, he practically begs his White superior officer to give his men work instead of the afternoon off the superior promised.  In another, he fights, verbally and physically with Peterson, who, tired of the verbal abuse, asks him “what kind of colored officer are you?” Peterson gets chewed out because he’s country, then gets his ass beaten because the Sergeant fights dirty. The flashbacks also reveal a big clue to Sergeant Waters’ belief system, which turns out to be his undoing. It’s a chilling sequence of dialogue about his WWI days, and a bravura speech by actor Adolph Caesar:
You know the damage one ignorant Negro can do? We were in France in the first war; we'd won decorations. But the white boys had told all them French gals that we had tails. Then they found this ignorant colored soldier, paid him to tie a tail to his ass and run around half-naked, making monkey sounds. Put him on the big round table in the Cafe Napoleon, put a reed in his hand, crown on his head, blanket on his shoulders, and made him eat bananas in front of all them Frenchies. Oh, how the white boys danced that night... passed out leaflets with that boy's picture on it. Called him Moonshine, King of the Monkeys. And when we slit his throat, you know that fool asked us what he had done wrong?
One ignorant Negro. That’s what Sergeant Waters thinks is holding the Black race from rising in the ranks more quickly in the military and in life. When Davenport asks Cobb why Memphis was Sergeant Waters’ favorite target instead of him spreading the wealth to the equally Southern Peterson, Cobb states that Waters respected Peterson because he fought back. Memphis didn’t, and every time he expressed his odd, country beliefs about crows and mojo, Sergeant Waters felt as if he were pushing the race back.

Meanwhile, Sergeant Waters thinks his own upbringing, the way he speaks and how he was educated will make a difference in 1944 (or even today, for that matter). Whites will see him and he will elevate the race by sheer will. After all, he’s respected by many of the Whites on the base. But he forgot one thing: It really doesn’t matter in 1944 Louisiana. His illusion of inclusion blinds him. When two angry, racist White officers become suspects in the murder, Davenport believes they are innocent after his cross-examination, even if the White officer he is with thinks they are guilty. Those two officers did accost the drunk Sergeant Waters the night of his death, but they didn’t kill him. They killed his illusions about all the work he’d done in crafting his persona, but they didn’t literally kill him. The ass-kicking they dispensed on Waters was an eye-opener. All those dominoes he set up and knocked down, actions that led him to his demise, were for naught. At that moment, he realizes that no matter how smart he is or how high he gets in this Army or this life…
They still hate you.
This may seem like a dated message. But look around, people. Listen to what is being said. Look at the vitriol and the hatred that’s grown exponentially the past few years. It’s not so dated at all. When Davenport confronts the murderer, he asks a question he would have had to ask Sergeant Waters: “what right do you have to decide what a good Negro is?” Charles Fuller is asking us that very question, embodying it in the character of the hated Sergeant Waters, who looked at his platoon and saw things about himself he’d rather forget. Fuller’s question gets to the heart of the lack of unity I sometimes feel amongst Black people. Who killed Sergeant Waters isn’t important; the death of what he stood for does. 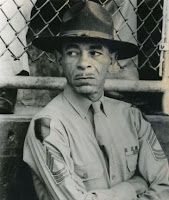 And now a few words about the man who played Sergeant Waters. I grew up listening to Adolph Caesar’s voice—he was the announcer on practically every Blaxploitation trailer/commercial AND he told me that “A Mind Is A Terrible Thing To Waste” on numerous United Negro College Fund commercials. (Click those first three links to hear him.) Here, in a few scenes, he creates a complicated character, oozing with hatred and using that wonderful voice of his for malicious evil. He originated this role on stage, and he owns it. His final scene, when he drunkenly realized the gravity both of his situation and his actions, is stunning. You can see his world collapsing in his eyes. Shooting him was a mercy killing at this point. For this performance, Caesar was nominated for a Supporting Actor Oscar—he’s one of the two nominations people tend to forget when they compile lists of Black nominees (Rupert Crosse in The Reivers tends to be the other). Caesar died in 1986, but I have this performance and his work in The Color Purple to remind me how great he was at being sinister. And that voice! It’s wonderful. 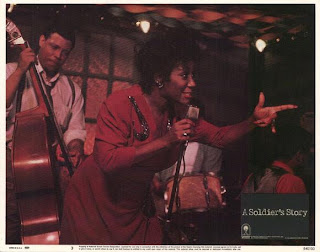 Lest I forget: Miss Patti is in this movie, singing a wonderful blues number about whiskey. She sings two songs in this, and both are worth the price of admission.
Posted by odienator at 1:55 AM

It's been years since I've seen this film. I have to put it on my list to see again. Great article!

I'd forgotten almost everything about this movie (I rarely can remember plots anyway)... except Adolph Caesar, who BURNED himself into my memory. Fine piece.

psantacruz, it's worth watching again, if only to see young Denzel get beat up by Caesar.

jim, Caesar's drill sergeant is more memorable than Lou Gossett's (not that Gossett gives a bad performance or anything). In another year, Caesar might have won that Oscar.