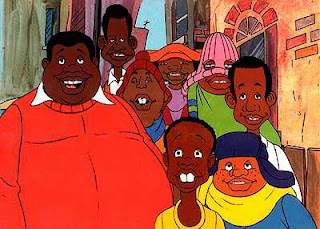 It’s Super Bowl Sunday, and as I’ve asked three times before: WHAT ARE YOU DOING HERE?! By the time you read this, I’ll be on a plane to California, where I’ll find a bar somewhere warm to watch the big game after I land. I’m presenting two big projects at our big work conference, so things may be spotty for the next few days. I’ll try to compensate for that later. In the meantime, I spent most of Saturday reconnecting with a staple of my youth, Fat Albert. Hey Hey Hey!

I had originally intended on watching 4 episodes on Netflix, then putting this piece up on Saturday, but I couldn’t stop watching. 13 episodes, and a Halloween special later, it was just too late for me to get this online in time.  So Fat Albert is doing Black History Mumf’s Super Bowl Halftime Special.

Bill Cosby did a comedy routine about Fat Albert back in the 60’s. Fat Albert, along with Weird Harold and Cosby’s brother, Russell, appeared in numerous skits. In 1969, NBC broadcast a one-off show called Hey Hey It’s Fat Albert, unseen by me. It was apparently a very different show, with music written and performed by Herbie Hancock and Fat Albert being so obese that they superimposed him over real life buildings collapsing as he walked.

In 1972, Cosby teamed up with Filmation Animation Studios to produce a Fat Albert series for Saturday morning TV. NBC and ABC refused to run it, and not because Filmation is Latin for “cheap, shitty animation that makes Hanna-Barbera’s TV animation look like Pixar.” According to this website, both NBC and ABC objected to the show’s educational content. CBS took the show, primarily because they could use it as a bargaining chip to get The Cos to do a variety show, presumably to combat the one hosted by my fellow Jersey City native, Flip Wilson.

For us, Fat Albert signaled the end of our cartoon viewing day, which always gave me mixed feelings. I was going to miss watching cartoons, but Fat Albert was the beginning of a 90 minute Black folks block. Soul Train followed Fat Albert, though on a different network. 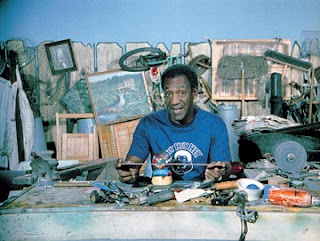 Throughout the theme song, Cosby interacted with his creations, throwing them a cardboard sign and flinging a paintbrush at the same sign to create a cartoon exclamation point.  (I just realized that, for Bill to get the paintbrush back, they just rewound the image. Cheap ass Filmation!) Bill warns us that we "might learn something before it's done." As much as I love the Fat Albert theme song, there’s something blatantly wrong with it. But I’m getting ahead of myself here. 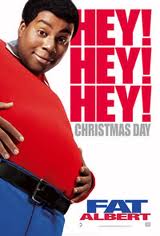 I next tried to remember all the characters’ names. I hadn’t seen a Fat Albert cartoon in years, but I had seen the Kenan Thompson movie. I blocked that out of my head after I saw it, so I had to rely on my childhood memories. There was Fat Albert, of course, a red-shirted Everykid with a Bill Cosby-provided gravelly voice and a heart to match the size of his enormous gut. Even though Fat Albert’s weight would probably result in a stomach stapling, Albert was always very active on the show. He would occasionally bust through the floor while doing exercise, or have a ball fly off his gut during one of the many baseball and basketball games the Junkyard Gang played, but he was never sedentary.

There was Rudy, the resident instigator and troublemaker, whose ubiquitous hat and pink-based 70’s outfit made him stand out in a group of kids with extremely bad fashion choices. And Dumb Donald, who wore a hat with eyeholes that covered the entire top of his face. In a casting move that begs me to remind you how cheap Filmation is, Dumb Donald’s voice was provided by the president of Filmation, Lou Scheimer. His is one of the names that spins around in that circle in the opening credits. 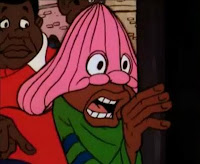 Mushmouth popped into my head next. He was in dire need of Geoffrey Rush’s skills in The King’s Speech. We used to think his speech patterns came about because his lips were too big, but they came from a jokey voice that Cosby would use later in his stand-up film, Bill Cosby: Himself. Bill Cosby himself, albeit a younger version, is also a character Cosby voices on the show. Cosby’s brother Russell, whom his Dad famously called “LOOK DAMMIT!” also appears as a youngster on the show, though not voiced by the real thing. Russell and Rudy are always at odds, insulting one another. Rudy calls Russell a shrimp because of his height, and Russell calls Rudy a little bit of everything.

Lest I forget Weird Harold, another holdover from Cosby’s standup (and a Jell-O pudding commercial from my youth), and Bucky, so named because he had buck teeth. They all occupied space in Bill Cosby’s hometown of North Philadelphia, hanging out and playing in a junkyard. Adults were seen intermittently, such as Mudfoot or their teacher. But mostly, Fat Albert followed the kids and the lessons they learned.  Lessons included bullying, too much TV, junk food, smoking, divorce and, in a subtle way, sex. Each lesson was summed up by a montage of the episode’s scenes while the gang sang a song about the topic covered. (In the first few episodes, the songs appeared much earlier in the show.) This gentle repetition, aided by the occasional interruption by a real life Cosby telling the story, helped the lessons sink in for us kids. 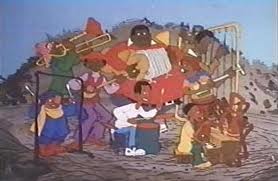 The songs and the Cos were far less distracting than Fat Albert’s dreadful laugh track; in fact, some of the songs were quite memorable. The gang would play junkyard based instruments, though in every song performance, Rudy’s junkyard instrument was replaced by a kickass looking guitar. The only thing that nagged at me, and I found it still did today, was that Fat Albert’s singing voice sounded NOTHING like his speaking voice. He should have sounded like Louis Armstrong, not some smooth voiced brother. Fat Albert was the original Milli Vanilli!

When I found several volumes of Fat Albert cartoons to watch instantly on Netflix, I searched for ones of which I had fond memories. I found 8 of them, and was also able to watch the Halloween special.  I correctly guessed which song the Junkyard Gang would sing at the end of each episode, and I was stunned by some of the things the cartoon showed. For example, I remembered the show about smoking, but had forgotten the episode had numerous shots of the characters smoking. In this day and age, when people are trying to get movies rated R for smoking, this wouldn’t fly at all—even though there’s a strong anti-smoking message (not to mention a killer, Colorized version of the famous cigarette lighting scene in Now, Voyager).  Fat Albert showed the kids playing hooky in another episode, and also getting into the kinds of mischief kids typically involved themselves.

Fat Albert gave me much to identify with: We had mattresses in our little “junkyard,”  just like the Cosby Kids do, that we’d practice flips on. There were beat-up looking wooden gates all around us. We had similar character types in our clique, including a troublemaking Rudy clone. There was also a Fat Albert, but in my ‘hood it was a girl. And I kid you not, we walked just like the kids did, because what ‘hood denizen didn’t have his own bop and strut he employed when walking around with his ‘boys? Everyone tells me I walk funny. I tell them it’s my flat feet and my bowlegs, but the truth of the matter is that it is all an act. I can walk just fine, but why would I do that?

Even though the characters were Black and in a Black neighborhood, many of my suburban-raised White friends have fonder memories of the show than I do. We talk about it all the time, and today’s piece is dedicated to them, and to Fat Albert, for bringing us closer. Despite the ghetto-based touches that endeared the show to me, Fat Albert had a universal appeal. It taught lessons we all needed, wrapped up in a cute little song and as much re-use of previous animated scenes as possible to pad the show to its full running time.

Perhaps my favorite episode as a kid—and I found it on Netflix—dealt with Suede Simpson. Simpson was a dude who liked to dress in fancy duds to impress the ladies, but refused to take a bath. As you can imagine, Suede Simpson was funky with a capital F. After gym class, he’s the only one who doesn’t take a shower (the shots of the gang showering together would never make it on TV today, either). When Fat Albert tries to gently tell him he should get under some water stat, Suede comments that fish stink because they are in the water a lot. Any hope that Fat Albert would say “Hey hey hey, did ya wash ya ass today?” gets dashed when Albert can’t bring himself to use bluntness.

Suede Simpson learns his lesson the way most men learn anything: He is DENIED punany by these cute girls at a birthday party. When a dog on the street sniffs him after his humiliation, and then walks across the street to get away from him, Suede Simpson finally watches an episode of soap. The gang sings the one song that, along with the theme song, I remembered all the words to:

“Soap and water
A toothbrush and a comb.
If you don’t learn to use them
You’ll be standing alone…”

Wash your ass or you won’t get any ass. Hey hey hey!

Your homework assignment:
Tell me your favorite Fat Albert episode/moment.
Posted by odienator at 2:14 AM

The hooky episode is the first one that popped into my mind, with the hobos hammering home the lesson at the end.

I also had to re-watch Suede Simpson after reading this. :)

Well, I was going to give the Brown Hornet his due at my blog, as a Black History Mumf extra! I'm going to try to do a few extra pieces at my blog (Tales of OdieNary Madness) that synch up with the Mumf here. I've got a piece on Cleo and the Casino of Gold and one on the Brown Hornet coming soon. I'll note those when they occur.

This week's really tough. I'm doing several presentations for our big work conference, so I'd expect those pieces later in the month. I like the hooky episode, and I noticed that one of the hobos shows up in a different episode as another character! Cheap ass Filmation!!!

I love reading your pieces, Odie. It's like having a discussion with a good friend.

psantacruz, thanks for the comment. I've tried to go for that feeling in this series.

Beggin' Benny. Oh my God. I just remember dying laughing as a kid when he told Fat Albert he was mugged by a dude that was 9-foot-6! Na na na. Those were good times.

With the addition of brown hornet, they omitted the gang playing a song at the end. -_- However, the episode where Albert gets caught "doin a favor for a drug dealer" was classic. Busted by the feds...neighborhood snitch...#classic hood ish