The Mumf Oscar piece has been bad luck in the past. I wrote about Ruby Dee, and she lost. I wrote about Taraji P. Henson, and she lost. This year, neither nominated Negro has a shot in Hell to win the Oscar, so I won’t feel bad if I mention Hushpuppy or Lushpuppy during the course of this piece. What I had hoped for was a nomination for Samuel L. Jackson’s Stephen from Django Unchained. I even had a piece in mind for today had that happened. Unfortunately, Oscar had other ideas, opting for five prior winners in the supporting actor category. Time for Plan B! 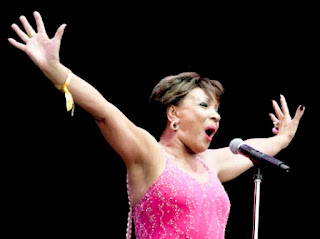 When I heard of the numerous musical numbers at this year’s Oscars, I prayed that Allan Carr’s ghost had possessed Debbie Allen, forcing her to wrest control of the Oscars and craft some of the most garish, AWESOME numbers in the history of the show. Alas, my prayers weren’t completely answered. God instead sent me Shirley Bassey, the theatrical diva goddess with the voice that blew out a thousand speakers. Goodness knows I love me some Shirley Bassey, so much so that I was the only one in the theater who laughed at that Shrek 2 joke about “meeting by the bush that looks like Shirley Bassey.”


Bassey is part of the tribute to 50 years of James Bond, as well she should be. She sang three Bond themes, Diamonds are Forever, Moonraker, and the king of Bond themes, GOLD-FIIING-GAAAH (duh-duh-duh-duh-duhhhh). One theme that Bassey could have improved greatly is the frontrunner for this year’s best song, Adele’s Skyfall. My Facebook friends and Twitter followers know how much I dislike Adele’s song; it’s a snoozy, dreary bore. The opening credits, which show Bond drowning, were PERFECT for this song.  Out of the four Oscar nominated Bond songs, it’s the least imaginative and the safest, which is why it’ll win. And I like Adele, so spare me your hate mail. (Even if I didn’t like her, I’d still tell you to Argo Fuck Yourself.) I just don’t like this song at all. 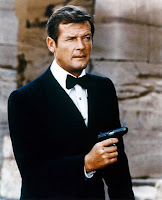 Goldfinger, the standard for Bond songs, didn’t get a nomination. The first song to secure a nod was Paul McCartney’s Live and Let Die. The other three songs are Skyfall, For Your Eyes Only, and the Marvin Hamlisch-Carly Simon collaboration, Nobody Does It Better. Three of these four songs came from the Roger Moore period. I’ve always said every generation gets the Bond it deserves, and mine got Roger Moore. I won’t kick him like most people will—he was the first Bond I knew, and I’m probably more forgiving than I should be about his movies. With that said, I must admit that the first Bond movie I saw is perfect fodder for mockery at Big Media Vandalism.


Live and Let Die was Roger Moore’s first outing as Bond, and considering how laughably bad it is, it should have been his last. Moore himself isn’t bad, it’s the absurd Negro paranoia surrounding him that gives me the giggles. There’s voodoo and possessed people doing the Pop-n-Lock on an island! Every Black person seems to not only know each other, but are also in cahoots with the villain. The story takes place in Harlem, New Orleans and a fictitious island that’s supposed to be Jamaica, chocolate places just dying for Bond to bring some cream into the coffee. 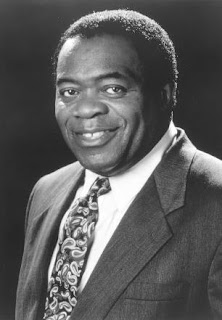 Live and Let Die was Ian Fleming’s second Bond novel, and having read it, I think the writer of Chitty Chitty Bang Bang should have called Live and Let Die “Coony Coony Buck Buck.” There’s more fear of minorities in both versions of Live and Let Die to fuel a hundred Tea Parties. Of course, you know I love this shit when it’s done right. The book gets it wrong, as does the movie. At least the movie version of Live and Let Die presents us with Yaphet Kotto as the Bond villain, perfect casting because Yaphet Kotto is SCARY. Unfortunately, the film will undermine Kotto’s scariness by casting him in a second role so garishly stereotypical that it makes Martin Lawrence’s Big Momma character look like Miss Jane Pittman.

Kotto first plays Kananga, the corrupt dictator of San Monique, an island in the Caribbean where one of Bond’s fellow agents meets his demise in a pre-credits sequence. Kananga is at the UN when another agent is murdered mere feet from him by one of Kananga’s agents. I love how the camera focuses on the brown hand that performs the execution, as if to say “betcha ain’t seen one of THESE before in a Bond movie!” I loved even more how, after the second agent is murdered, the streets of New Orleans erupt in a dancing frenzy, as if to celebrate the murder of this White man by scary Negro forces.


Kotto’s second role is as Mr. Big, a Harlem gangster who doesn’t remotely look real. He looks like Yaphet Kotto in a bad makeup job. Since Kotto is such a distinctive looking bruva, it’s kind of hard to hide him. I knew Mr. Big was Kananga as soon as I saw him. While Kananga sounds like an educated, power-mad psychopath, Mr. Big sounds like Sapphire from Amos ‘n Andy. He should have been called “Mr. Nig.” On making Live and Let Die, Kotto spoke about how ridiculous and stereotypical he thought the role was, and how he did his best to not look too ridiculous. He didn’t succeed. Mr. Big thankfully has little screen time, but when he’s on, you’ll have tears in your eyes just looking at him. 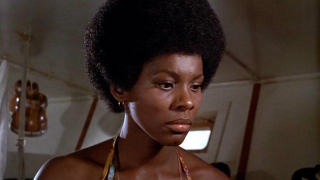 Roger Moore makes his entrance as Bond in bed with an Italian spy. There’s some amusing comedy as Bond tries to hide this bella from M and Moneypenny. M gives Bond his marching orders, and soon  he’s in Harlem trying to find out why three British agents were murdered. He’s aided by CIA agent Felix Leiter (here played by The Fly’s David Hedison) in America and Rosie Carver (Gloria Hendry) in San Monique. Hendry predates Halle Berry by decades as the first Black Bond girl; it’s too bad her role consists of veering perilously close to the line of coonery as she reacts in horrified fashion to voodoo symbols like hats and dolls. It’s even how Bond gets her into bed! Rosie Carver is so fucking inept as a traitorous CIA agent that the role becomes an insult for Hendry.

Supposedly the Bond producers wanted to cash in on the Blaxploitation genre with this film. It’s obvious that director Guy Hamilton is no Jack Hill, and even more obvious that the producers hadn’t seen any Blaxploitation. If they had, Hendry would have been badass like Pam Grier. The numerous Black people in cahoots with Kananga/Mr. Big pepper their speech with “honky” and “pimpmobile” but nothing they say sounds remotely realistic. The dialogue sounds like that shit Robert Townsend wrote for “Jivetime Jimmy’s Revenge” in Hollywood Shuffle. 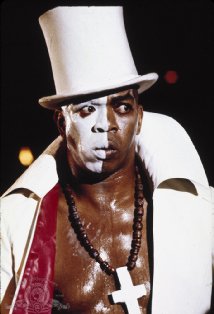 Geoffrey Holder, Nasty Nelson to you Boomerang fans, shows up as, I don’t know, Voodoo Alvin Ailey or something. His character, Baron Samedi, is some kind of voodoo priest who works for Kananga and terrifies everyone on San Monique. Holder dances around practically naked, laughs that wonderful laugh of his, and gets the last shot in the film. Your guess is as good as mine as to what that last shot means.

Faring better is Holder’s partner in crime, Julius Harris III as Tee Hee. Tee Hee loves crocodiles and has a metal arm as a result of that love. That metal arm and its claw-like hand are the coolest things in Live and Let Die, cooler than any gadget Q gives Bond. Tee Hee bends Bond’s gun on their first meeting, a visual neutering by a stereotypically more sexual prowess, and gets the last fight sequence with Bond. Harris comes off like a Black version of Richard Kiel’s Jaws, and is far more threatening  than Kananga.

Speaking of Kananga and voodoo, Kananga has a fortune teller named Solitaire who can see the future because she has a magical hymen. Solitaire is played by a sexy Jane Seymour, making her film debut. According to Wikipedia, screenwriter Tom Mankiewicz wanted to cast Diana Ross in this part, but the producers opted to keep the character as she is in the book. “Ain’t this a bitch,” I thought while watching Live and Let Die. “Kananga has to go to a White woman for voodoo?!!” Imagine Diana Ross as Solitaire! It would have been awesome, though with Miss Ross’ disposition, she’d probably be better cast as Kananga. 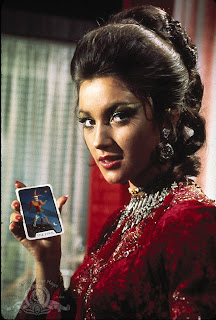 Bond cheats Solitaire into thinking the cards tell her to give up the pudenda, and after screwing Bond she’s rendered powerless. This is the first time in the Bond series that literally happens, but I digress. Live and Let Die turns into a “Save the Helpless, Hot White Lady” narrative. Meanwhile, we finally figure out what Kananga’s evil plan is, and it’s no better than Super Fly’s! He wants to get America hooked on his drug product. The only difference is, Super Fly’s Priest wants to sell his, while Kananga wants to give it all away at first for free. What happened to crazy world domination, with volcanoes and sharks with frickin’ lasers on their heads? (Kananga has sharks, but alas, they’re laser-less.) We get a Black super villain, and his plan is to scare island natives away from his poppy fields via voodoo while impersonating a Harlem gangster to sell his product? He couldn’t even get a salesman to do the Harlem legwork for him?! How bootleg is this shit?!

Aw, fuck it, I’ve had enough of this.  I don’t expect realism in a Bond movie by any stretch, but Live and Let Die just feels offensively lazy. Just having Black villains isn’t enough. Ian Fleming’s novel didn’t realize this, nor did the makers of Live and Let Die. Considering how Daniel Craig’s series treats its Black folks (see Naomie Harris’ insulting demotion in Skyfall), I don’t expect these producers to give me a clever Black anything. Live and Let Die is such a wasted opportunity to be great trashy fun. Mr. Bond, I sigh in disappointment.
Posted by odienator at 3:27 PM