The Poitier-Cosby Trilogy: A Piece of the Action 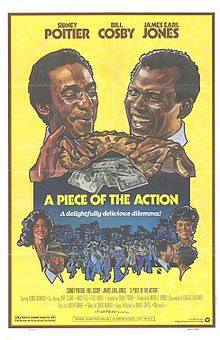 During Black History Mumf 2012, I set out to write about the Poitier-Cosby trilogy of films from the 1970’s. I lived up to two-thirds of the bargain, writing about Uptown Saturday Night and Let’s Do It Again. Every time I set about writing a piece on the last film in the trilogy, 1977’s A Piece of the Action, I was reminded how much I disliked it. I was so happy to again spend time with Geechie Dan, Little Seymour and Biggie Smalls (not the rapper, folks) that writing those pieces felt effortless and fun. By comparison, writing this piece was going to be a chore. Watching the 2+ hours of Piece again, after having so much fun with its predecessors, would feel as if I’d traded a happy ending massage parlor for a dentist’s office. I dreaded doing a post on it, and I have half a dozen discarded drafts to prove it.

So I conveniently “forgot” to write about it last year. Nobody’s gonna notice, I told myself.

Somebody did: The compulsive in me kept looking at that Black History Mumf series list and calling bullshit on this author. “The Poitier-Cosby Trilogy” designation would never be completely true unless I wrote this piece. Since Netflix has yet to come through with the DVD of the film I had intended for today’s Mumf entry (shades of 2008’s Mumf issues with them), I am here to review Bill and Sid’s Not So Excellent Adventure. Consider this a bit of unfinished business, a punishment for something with which I thought I’d gotten away.

Despite a cast featuring James Earl Jones, Denise Nicholas and Sheryl Lee Ralph, A Piece of the Action is an overlong caper comedy with an identity crisis. It may have the stars of Uptown Saturday Night and a theme song sung by Let’s Do It Again’s Mavis Staples, but it sorely lacks the other ingredients that made those films the Black movie classics they are. It is the sole entry in the trilogy not written by Richard Wesley. Wesley’s successful duet featured Poitier and Cosby in a pair of comedies involving a stolen lottery ticket and the power of hypnosis respectively. Wesley populated the films with a delectable array of criminal types straight from the ‘hood. About Uptown Saturday Night, I wrote:

“Screenwriter Richard Wesley (who also wrote Let’s Do It Again) writes caper films for Black audiences, filled with little touches that ring true for ‘hood denizens. He also creates characters who are adults with adult problems. They may act ridiculous at times (Cosby sells some major woof tickets in this one), but unlike today’s movie adults, these guys are not written for 12 year old boys to relate to in any fashion. That alone is refreshing, but I dig jonesing on just how Black the plot details are in Wesley’s films.”

On Let’s Do It Again, I wrote:

“[Let’s Do It Again] didn’t follow the same characters from Uptown, but covered  similar territory. There was action, comedy, and the Cos doing what he does best: trying to improvise his way out of a jam. Poitier directed several of the same actors from the prior feature, and Wesley’s title summed up what went on in 1975 when the film was made. He called it Let’s Do It Again.

Like most sequels, Let’s Do It Again is bigger, louder, raunchier and sillier. The stakes are higher for our heroes, and the plot requires a leap of faith almost too large for something as comedic as this. But cast and crew pull it off, assisted by a Curtis Mayfield score filled with lead vocals from The Staple Singers’ fine as hell lead singer, Mavis Staples. For my money, Let’s Do It Again is the best of the Cosby-Poitier trilogy. The worst of the three, A Piece of the Action, will occupy this space next Saturday.”

It took me 52 Saturdays to make good on that promise. My bad.

Those quotes highlight what’s wrong with A Piece of the Action. The filmmakers—director Poitier and screenwriters Charles Blackwell and Timothy March—aim for a more dramatic feature with a message. They want to remind you of the other films while both changing the tone and adding a bunch of teenagers to undercut the adults. Instead of getting in over their heads with wannabe criminal shenanigans, Cosby and Poitier are now expertly skilled master thieves who have never been caught. Instead of a group of colorful, memorable criminal types played by big-name actors like Harry Belafonte, we get a bunch of one-note, cynical kids played by up-and-coming actors like Eric Laneuville and Ernest Thomas (Raj from What’s Happening). The kids are looking for jobs, and Cosby and Poitier are forced to help them or risk going to jail by a retired cop (James Earl Jones) blackmailing them with evidence of their crimes.

The “help the kids” plot does not play nicely with the “rob the mob” plot. This was clearly a one or the other proposition. A Piece of the Action never once attempts to stitch these mismatched elements together in a convincing fashion.  Had I a choice between the two conflicting halves, I would have chosen the heist movie. The first 30 minutes or so of the film presents a crime that’s very well directed by Poitier. Cosby and Poitier make convincing crooks. Can you think of another film circa 1977 that featured elegant Black safecrackers? Probably not, but I bet you can name a dozen preachy, generation-gap, smart-ass ghetto kids movies from the same period.

Once Jones sets the high school plot in motion, Cosby’s comedy is practically neutered and Poitier thinks he’s in "To Sir, With Bruv," the Black version of the film he made 10 years prior. (Aside: To Sir, With Love is a movie I admit to loving far more than I should—I adore it, and I don’t care if that’s unhealthy.) The Cos woos principal Denise Nicholas, and while that’s kind of sweet, it’s not given the attention nor the weight to make it effective. Meanwhile, the kids bicker and fight and are generally unpleasant. I don’t know if this was an attempt to reach out to a younger audience, but at best it’s a pander and at worst it’s rather intolerable. Sheryl Lee Ralph in particular got on my nerves (and you know I usually love me some SLR); her 3-minute “takedown” of her “bougie” teacher is an embarrassing hot mess. It sounds like that bullshit, clueless “anti-cracker” dialogue Joel Schumacher wrote for Dolores’ similar big scene in Sparkle.

A Piece of the Action must realize it’s been spending too much time with these broke-ass kids, because it introduces another blackmail plot into the mix. This one involves the old reliable “one last heist” cliché. This drags the film out well past the 2-hour mark and my willingness to keep watching.

I will give A Piece of the Action this. The last scene in it is great, and not just because it has closing credits going across it. Mavis Staples sings that titular tune while the kids dance with Poitier (in yet another ripoff of To Sir, With Love). Cosby manages to get his biggest laugh (and there are so few to be had from him here) by falling victim to the most dangerous ass in a Warner Brothers movie. See for yourself here.

Poitier retired from acting after this film, only to return 11 years later in Shoot to Kill (which I enjoyed). He continued to direct, and his next film was Stir Crazy. I’d like to say this is the lowest point in the Cosby-Poitier collaborations, but I’d be called out as a liar by a film called Ghost Dad. If you come back here to the Mumf to find a piece on that film, you will know I have gone batshit crazy and have been replaced by a replicant.

Well, you'll know it's me if I link to this scene:

How could you write such filth flarn filth!

Man, you finally captured what has bothered me for decades, the sheer unenjoyability of this film, despite all the talent committed to it. This is the movie where Cos becomes the social conservative who would create The Cosby Show in a few years and mercilessly critique the underclass decades later. Except that those milestones are actually entertaining.

I like that A Piece of the Action tries something different, tweaking the previous films' formula, but, yeah, the way it goes about it just rings so false.

Let me know when you're ready to do the inevitable Ghost Dad video essay. I can hook up an effect where you rise up out of a phone receiver to choke Bill and Sid.

PUT THE BITCH ON THE PHONE!!!

Some of the rhythms Bill employs with Denise Nicholas here found their way onto the Cosby Show. I love the Cosby Show, and I even get a kick out of the "Come on, triflin' niggas!" Pseudo-Republican Bill Cosby we have running around today. What upsets me about this film is how it seems to be an APOLOGY for the loosey-goosey Black id of the prior two features. Now we have to be "respectable." It's not even sincere. At least The Cosby Show was sincere.

Harry Belafonte dissed the hell out of Sidney's direction and Uptown Saturday Night in his book. I get to talk some smack about Mr. Day-O later in the Mumf. Stay tuned!

Phylicia Rashad was great on The Cosby Show, but I wonder about a Denise Nicholas Claire Huxtable* the same way I wonder what a Claudine with Diana Sands would have been like.

*It's true that she turned down the role?

I heard it's true she turned down the role. But I still love Rashad's Claire. The other day, I was watching a rerun where Vanessa wanted to go to a college party. Bill called up Phylicia and told her he told Vanessa she could go. Rashad said "I told that little wench she couldn't go!" I fell out. I LOVE that she said "wench." Denise Nicholas woulda said "HEFFA!" But I'm splittin' hairs here.

Ohh, that makes the "what if" ache even more.

They both belong in the Black Female Comic Foil Hall of Fame, alongside LaWanda Page and Tisha-Campbell Martin (the latter serving as an adorable Denise Nicholas to two great comedians).

Maybe SOMEBODY ought to do a Denise Nicholas piece here at Black History Mumf, says Odie to the reflection in the mirror.