In Jail Without the Bail 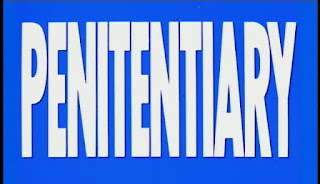 Back when I was in the 7th grade, Jamaa Fanaka’s Penitentiary played the State Theater in my hometown. My classmates went to see it, and on the following  Monday, the boys could not stop talking about it. They quoted the R-rated dialogue incessantly, which didn’t go over well with the teacher. The one line that was repeated ad nauseum was “You gotta bring ass to get ass!” Since I wouldn’t see Penitentiary until two years after its release, I had no idea what that meant. In a movie about prison, it couldn’t have been a good reference. 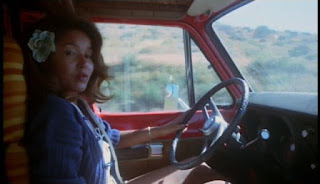 My classmates went back to see Penitentiary several times more, contributing to its top 5 box office standing in 1980. For a time, Penitentiary was one of the top grossing independent movies of all time. It spawned two sequels, one of which had a pre-Rocky III Mr. T in it. It remains Jamaa Fanaka’s most well-known movie, no easy feat considering he directed a movie about people being strangled by a killer Black dick. That movie should stick in one’s mind more than a prison flick.

Penitentiary was made when Jamaa Fanaka was still a student at UCLA. It’s low-budget, and it looks it, but that adds to the subject matter. The prisoners in this film look like they’ve been in jail, from the old boxing trainer Seldom Seen (Floyd Chatman) to the film’s version of The Booty Warrior, Half Dead (Badja Djola from A Rage in Harlem). With about 5 teeth in his mouth, Half Dead looks Fully Dead. The prison is run by the man who owned Porky’s, Chuck Mitchell. Mitchell’s brother-in-law has some kind of boxing for parole program the film doesn’t completely explain. Winning a boxing match could also get a prisoner conjugal visits with their women. “If you don’t have one,” says Warden Porky, “we’ll be happy to provide one for you.” I guess in this case, you gotta bring fists to get ass. 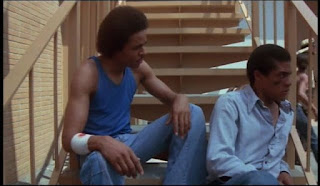 Into this den of supposed reform comes Martell Gordone (Leon Isaac Kennedy) and Eugene (Thommy Pollard). Both are a tad too cute for this outfit. Gordone, who goes by the name Too Sweet because he is addicted to Mr. Goodbar chocolate candy, was framed by a hooker (the hot Hazel Spears) who murdered a man and left Too Sweet to take the rap. Eugene falls victim to Jesse Amos, his cellmate. Amos calls Eugene “Genie” and treats him as if he were Barbara Eden. Too Sweet winds up bunking with Half Dead. Despite his name, his appearance and his Looking for Mr. Goodbar antics, Too Sweet can’t be tampered with—he’s the star of the movie! Half Dead is unaware of this, which leads to the most memorable scene in Penitentiary. Half Dead and Too Sweet battle it out in their cell, with Too Sweet fighting for his life and his ass. The fight sequence took 3 days to film, and Djola and Kennedy brutally battle it out for what seems like an eternity. It is one of the most desperate fight sequences I’ve seen in a movie. 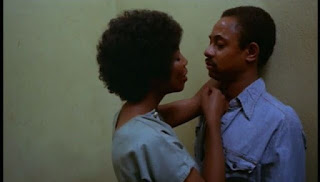 Most of the other fights in Penitentiary are boxing matches, which pale by comparison to Too Sweet’s bare-knuckle brawl. Everybody seems to get into the ring at one point, and until Too Sweet’s battle at the end, none of the matches have any suspense value. Remember, this is a major part of the film’s plot, this boxing for freedom and sex story, yet it’s not terribly compelling until Too Sweet’s match. Fanaka doesn’t help by intercutting the boxing sequences with a guy having bathroom sex with a prisoner from the women’s prison next door. These scenes feels designed just to get some tits into the picture, though I did like this line uttered by the woman: “You fall out of the ceiling and expect me to drop my drawers?” 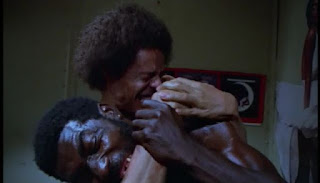 Penitentiary touches on items it should have explored more, such as the wrongful incarceration of Black men, prison conditions, and the notion of men as property. Seldom Seen has a monologue that sounds exactly like Morgan Freeman's speech on hope in The Shawshank Redemption, delivered 15 years earlier. A serious discussion of these issues has no place in an exploitation movie like this, however, so we are left to audience-pleasing scenes and dialogue. Again, Penitentiary made a lot of money, most of it coming from ‘hood theaters like the one my classmates and I frequented. I remember really liking the film when I was younger, but In the hard, cold light of a viewing today, I have to say my opinion of it has gone down a few notches. The seams really show now, and Fanaka’s screenplay could use more fleshing out of his themes and characters.

On the DVD commentary, Jamaa Fanaka expresses surprise that Leon Isaac Kennedy never became a star. Kennedy never made it to the mainstream, but for a time, we hoodrats thought he was damn cool.  He was certainly a star to us boys: He was married to sportscaster, actress and former Miss Ohio, Jayne Kennedy, who appeared with him in some of his films. The Kennedys were lusted after by the moviegoers at the State Theater, with the girls constantly saying how great Kennedy’s naked ass was (it was always being shown bouncing up and down between some hot woman’s legs) and the boys drooling over Ms. Kennedy. Truthfully, neither of them could act worth a damn, and their movies were turrible (though there’s a major soft spot in my heart for Jayne’s film, The Muthers). We went to the Kennedys' pictures for the softcore sex and the violence, of which there was thankfully plenty.

The Blaxploitation genre was dead by 1979, but Fanaka and Kennedy breathed some new, though different life into it. The success of Penitentiary led to its first sequel, and Black remakes like Leon and Jane's version of Body And Soul (which is astonishingly bad). Since this and other films like it peppered my early adolescence, I thought I should say a few words about them here at the Mumf. Also, Jamaa Fanaka’s name alone has given me hours of pleasure saying it over the years. The radio announcer on the Penitentiary commercials sounded like he enjoyed saying it too.

By the way, “you gotta bring ass to get ass” is spoken by Eugene to Jesse Amos. The context is exactly what you think it is. You didn’t think I’d leave you hanging.
Posted by odienator at 10:57 PM

Odie: The fight sequence took 3 days to film, and Djola and Kennedy brutally battle it out for what seems like an eternity. It is one of the most desperate fight sequences I’ve seen in a movie.

Amen. The fight scene with Half Dead is the reason to see the movie. It shows why Fanaka, despite ending up in exploitation films, deserved his place in the '70s "L.A. Rebellion" class with Charles Burnett, Julie Dash, et al--though the rest of his film work seems to shout, psych!