(Editor’s Note: The second feature in our President’s Day Double Feature is also about baseball, except this time it’s a team in the Negro Leagues led by Mr. Colt 45 himself, Billy Dee Williams.) 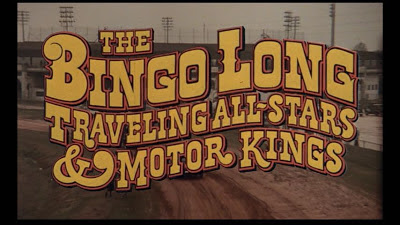 When the major leagues shut out Blacks by segregating teams, Black players went to a league of their own. There was some form of Negro League in existence since the 1800’s, though the first recognized league popped up in 1887, two years before the major leagues went Whites Only. Two of the more well known leagues were the Negro Southern League and the Negro American League, both of which had the privilege of hosting pitcher Satchel Paige. Paige was an incredible ball player and the stuff of legends, pulling stunts like bringing his entire outfield into the infield and striking out all his batters. Paige is the most famous of all Negro Leaguers, though it was his Kansas City Monarchs teammate, Jackie Robinson, who broke the color barrier in 1947. Paige joined the league the next year, pitching for the Cleveland Indians. His age, like Robinson’s baseball jersey number, was 42, making him the oldest pitching rookie in major league baseball history.


It was Paige who said “Work like you don't need the money. Love like you've never been hurt. Dance like nobody's watching." He also supposedly coined the word “copasetic,” but I don’t have any proof of that. If so, I’d find that the coolest thing about the man. After all, I’m a writer, not a baseball player. I played football. 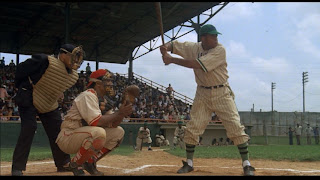 In 1996, Delroy Lindo played Paige in the excellent TV movie Soul of the Game, but in 1976, he was the inspiration for Billy Dee Williams’ titular character in The Bingo Long Travelling All Stars & Motor Kings. 1976 must have been the year for unwieldy titles: Lee Marvin’s equally hard to remember The Great Scout and Cathouse Thursday also premiered that year. This is why they had big marquees back in the day. You’d run out of space otherwise. At least Bingo Long’s title, based on the book of the same name, has a reason for its longwindedness. There are nine players on a baseball team, and 9 words, including the ampersand, in The Bingo Long Travelling All-Stars & Motor Kings. Each player on the team has one of the words on his uniform. That doesn’t make it any easier to remember. 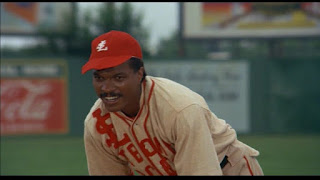 Steven Spielberg was supposed to produce this film, but the publicity from Jaws swallowed his schedule whole. Berry Gordy, of Motown fame, stepped in as executive producer and, unlike his production takeover during Mahogany, let the director keep his job. That director, making his feature film debut, was John Badham. Badham’s next picture had 2/3rds less words in it than his debut. That film was called Saturday Night Fever. Before Badham put Travolta on the dance floor, he put three of the biggest Black stars of the 70’s on the baseball diamond. In addition to Billy Dee Williams, Bing Long features James Earl Jones and Richard Pryor. Billy Dee and Richie P. appeared in 3 movies together, two of them period pieces. Bingo Long takes place in the 1930’s. 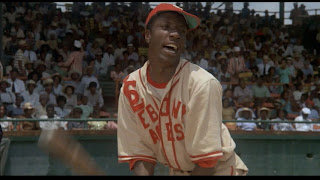 Jones plays Bingo Long’s partner in crime, fellow teammate Leon Carter. Long and Carter are the pitcher and catcher respectively on a Negro League team owned by The Wiz’s Mean Ole Lion, Ted Ross. Ross is also a mean ole owner, ripping off the players every chance he gets. When Rainbow (DeWayne Jessie), a player on the team is beaned with a career-ending pitch, Ross’s Sally Potter docks the other players’ pay to buy the now mute, brain-damaged Rainbow a ticket back home. While watching Bingo Long, I couldn’t place the actor who played Rainbow, even though I knew I’d seen him somewhere before. I’ll save you the trouble of racking your brain. Follow this link for the answer. Let this also serve as my annual John Landis plug at the Mumf.


Disgusted by both the treatment of the injured Rainbow and their paychecks by Sally, Carter suggests that team members should ditch the Negro League and start their own team. Bingo Long likes the idea. He decides to get a barnstorming team and travel the country looking for pick-up games. Long and Carter call up the best members from all the teams and put together a new team of folks tired of the corrupt owners of their current league. Bingo Long finds them a manager who’ll schedule their games, provided they put on a strutting show for the locals in order to get them to come to the games. They also showboat and show off during the games. This was not uncommon in barnstorming days; in fact, for the last few years of the Negro League, the teams played in a more Harlem Globetrotters-like fashion. Producer Gordy logically injects himself into the movie here, writing the song the team dances to as they march into town. Sung by disco legend Thelma Houston, it contains words you couldn’t use in a 1930’s movie. 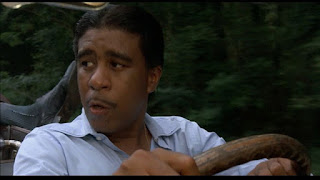 One of Long’s new teammates is Charlie Snow (Richard Pryor). Snow has dreams of getting to the majors, but he knows they won’t accept a Black man. So he decides to try to pass for Cuban, rechristening himself Carlos Nevada (why not Carlos Nieve, Rich?) This is the first, and thus far only, film I know where a Negro is attempting to pass for something other than White. Pryor’s Cuban accent is intentionally half-shitty and half-convincing; his idea is totally ridiculous, and when it doesn’t work, he tries to get in as a Mohawk-clad Indian named Chief Takahoma. As usual, Pryor’s role invites both comedy and tragedy, the latter in a gruesome, bloody sequence that’s a bit much for a film as light as this.


Long also finds a country boy named Esquire Joe (Stan Shaw) who is playing for the other team but wants to defect. After seeing Joe’s almost supernatural abilities on the field, Bingo Long hires him. With Esquire Joe, the team is practically unstoppable. People stop going to the regular Negro League games to follow The Bingo Long Travelling All-Stars and Motor Kings. 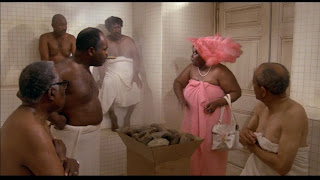 When one of the other team owners suggests the league play Bingo Long’s team for money and prestige, Sally doesn’t listens to her because she’s a woman AND is played by his mortal enemy from The Wiz, Mabel King. Ross and King are hilariously mean to each other here, and his hatred of her only grows once he realizes her idea was right. Before he has his moment of clarity, Potter sends two goons to intimidate the now successful Bingo Long Travelling All-Stars & Motor Kings. They’re played by Roc’s dad, Carl Gordon and Ken Foree. They’re not above using razors, robbery, fists and torture to strike back at the deserters. Foree in particular is nasty enough to make you hope the zombies will eat him in his next movie, Dawn of the Dead. 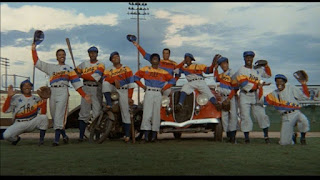 The goons work at splitting the team for a while, but this is a sports movie and you know what that means: Big Game at the End! Sally offers Bingo Long a shot at playing his best players. If Sally wins, The All-Stars and Motor Kings disband and come back to work for him at half-pay. If Bingo Long wins, his team becomes part of the league. I don’t have to tell you  how this ends up, but there are a few nice character surprises en route to victory. One of these surprises ties in nicely with the other President’s Day feature I wrote about earlier.


As a sports comedy, Bingo Long is pretty good. It started the small sub-genre of Black-themed sports movies, of which there should be more than there are. The actors are convincing as ball players and the film keeps them in enough trouble to almost justify its 2 hour running time. Bingo Long and his teammates have characteristics of real-life Negro League players like Josh Gibson, Willie Mays and Satchel Paige, which make for nice touches. Jones and Williams have a mischievous chemistry that makes their scenes fun to watch, while Pryor once again employs movie theft in his scenes. This is a good movie to watch on a lazy Sunday afternoon when it’s too cold to go outside. 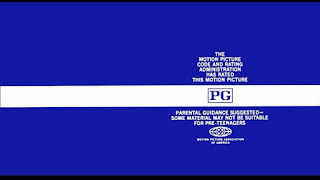 You know I can't resist my old-school MPAA ratings screens. Bingo Long is rated PG.
Posted by odienator at 11:51 PM