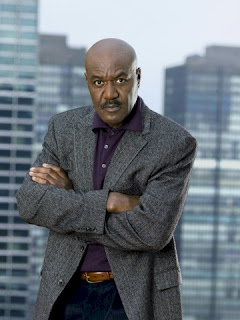 Delroy Lindo and Keith David have a lot in common. They both appeared in, and were nominated for Featured Actor Tonys for, August Wilson plays (Joe Turner’s Come and Gone and Seven Guitars respectively). Both are over six feet tall and have penchants for playing tough guys. Both have been used by Spike Lee, with Lindo appearing in three Spike Lee Joints and David in one of those three, Clockers. Lee casts both men on opposite sides of the law, and you’d think that Lindo, who is 6’4” tall, would play a tougher character than David, who is 6’2”. Instead, David’s Andre the Giant is a tough as nails cop and Lindo’s Rodney Little is a whiny, neurotic and paranoid criminal. Lindo’s tics would be comic if he weren’t so intimidating. He’s scary because worried criminals are unpredictable. Their paranoia doesn’t allow them to be rational or to focus as much as they should.

Rodney’s obsession is the unusual relationship between his clocker, Strike (Mekhi Phifer) and a cop, Rocco Klein (Harvey Keitel). Rocco is investigating the murder of a fast food restaurant manager who refused to serve Rodney’s clockers. Rodney tells Strike that if he kills the manager, he will move up in the drug organization. The manager is shot, and since Rodney doesn’t know Strike didn’t do it, he’s worried that Strike will cut a deal to turn on Rodney in exchange for immunity. Rocco knows Rodney is easily freaked, so he keeps showing up to look buddy-buddy with Strike. Early in the film, Rodney is very seductive, calling Strike his son and reaching out to this fatherless boy. Once Rodney sees Strike and Rocco, his worrisome personality gets the better of him.

Lindo isn’t afraid to make Rodney look childish and pathetic, but he doesn’t forget why Rodney is running the clockers. Strike gets his ass kicked late in the film, but not by whom you’d expect. Andre the Giant tears into Strike, giving him a vicious pounding and then threatening to put five shots in his dome. Strike says nothing, not that he can with all that ass-kicking going on. In contrast, when Rodney questions Strike during a drive, Strike is disrespectful to him. After one too many questions, Strike says “fuck you, Rodney.”

Spike Lee’s camera is inside the car. You can see through Rodney’s driver-side window that he’s pulled the car over. Lindo’s worried look changes starkly. “Excuse me?” he asks before dragging Strike onto his lap. “Open your mouth, bitch!” says Rodney, pushing his gun into Strike’s mouth. Lindo delivers his lines with convincing furor, but I couldn’t stop noticing that Rodney’s positioning is, to be Ebonic, stewpit. If Rodney pulls the trigger as he threatens, he will blow not only Strike’s head off but his own balls as well. This is clearly a man who doesn’t think before acting. 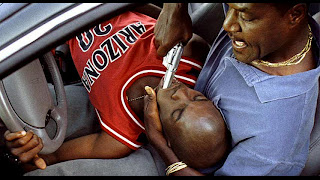 After Andre bowls a few strikes with Strike, and Rodney sees this, Strike runs to the protective arms of Rocco. Rodney follows him. As Strike is inside with Rocco, Rodney turns Strike’s car into a Maaco commercial. Lindo clearly relishes this demolition and Lee gives us all its glory in montage. He is doing this right outside of the police station, in full view of everyone. 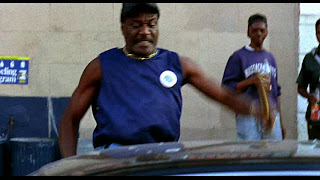 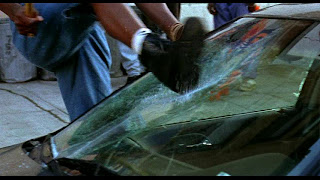 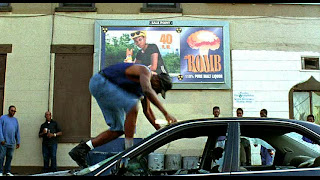 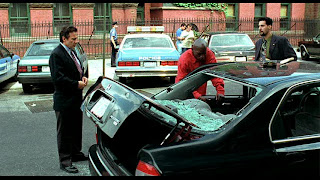 “Bitch you is dead,” says Rocco’s partner John Turturro, reading Rodney’s graffiti scrawled across Strike’s car, a car he got courtesy of Rodney. We never see Rodney again, and I’m rather sorry we don’t. Lindo’s performance deserves a showdown scene of some sort.

Clockers is the third Lindo-Lee collaboration. His first was Malcolm X’s seductive drug lord, West Indian Archie and his second is the worried father of Crooklyn. They are three distinctly different performances. Crooklyn’s father role has several moments of quiet reserve, as when Lindo comforts his daughter in the bathroom after she’s reminded of her mother’s death. “Mommy’s gone,” he reminds her, and though it’s only two words, Lindo gives them weight. He’s surprised and stunned that his daughter would momentarily forget. My favorite scene of his in Crooklyn is when he has to explain to the tenants of his building that Con Edison has turned off their lights as well as his. This is a very large man, but he uses his voice to diffuse the situation as much as possible.

Lindo’s first role for Spike is something of a melding of Rodney and Crooklyn’s Woody. His West Indian Archie is the drug dealer/gangster who seduces Malcolm Little (Denzel Washington) into the world of coke, conk and White women. In the first half of the film, West Indian Archie is one scary cat, whom Malcolm is unwise to cross. But later in the film, we see him felled by illness. This is an entirely different man, a broken one, and Lindo’s transformation is jarring. The roles of power in the scenes between Malcolm and Archie reverse; the hood rat in me almost felt sorry to see such a fearsome man brought low, even if he deserves it.

Several directors have benefitted from Delroy Lindo’s ability to play complex characters trapped in an intimidating frame. Barry Sonnenfeld used him in Get Shorty, and he’s Erykah Badu’s incestuous father in Lasse Hallstrom’s The Cider House Rules. He’s an angel of God endorsing adultery, and the only good thing, in Danny Boyle’s disastrous fantasy A Life Less Ordinary. And he used his stunt driving training to tear up the streets in Dominic Sena’s Gone in Sixty Seconds remake. Lest I forget he was part of John Woo’s acting crew in Broken Arrow and David Mamet’s gang of thieves in Heist.

Two of Lindo’s more interesting roles are in the TV movie, Soul of the Game, where he’s very good as Satchel Paige, and 2009 Best Picture nominee, Up, where he’s a mean talking Doberman out to torment the cute talking doggie, Dug. For that last role, he was up against Keith David for Best Voice Performance at the Black Reel Awards. Both David and Lindo lost, which means I wouldn’t be surprised if some of the voters had their windows bashed in when they went to their cars. Bitch, you is dead indeed.
Posted by odienator at 10:40 PM

Your appreciation is appreciated---I loved Lindo in Clockers and Crooklyn (Malcolm X, oddly, never made much of an impression on me), so it's nice to see some credit due.

Part of the wonder of Crooklyn, I think, is how well he presents the character (pretty obviously based on Bill Lee) as equal parts lovable and infuriating. His excitement over the jazz concert---"There's always an audience for good music", his refusal to hear his wife's doubts about it, and the pathetic result (a pretty piece played for about 10 people) is somehow just as heartbreaking as the mom's death. Lindo gives it a wide-eyed sincerity that makes you understand why everyone puts up with his fantasy of making it, though---no one wants to break such an open heart.

And right on about Rodney's weird childishness. I'm always struck, during the car-bashing scene, how his face looks less like a man engaged than a five-year-old in the midst of a tantrum.