Your Homework Assignment: The Odienator Kings of Comedy

I was watching TV this morning in my hotel room, and this couple was on talking about a special, romantic thing the husband did for the wife. He watched 30 Chick Flicks in 30 Days. I dropped the hot iron I was using on my dress shirt on my foot. This was news?! They got on TV for this shit? As the news lady interviewed him, he talked about the movies he watched and how they affected his relationship with the missus. Talk about perpetuating stereotypes! This was supposed to be hard for a man, watching a movie with women in it? Some of the films in this genre are pretty good, and even the ones that aren’t have attractive looking women in them. Your girlfriend might be weeping her eyes out, but you’re busy fantasizing about whether Kate Hudson’s nana tastes like Nutella.

Unless he watched Beaches 30 times, I can’t see how this man suffered while watching female oriented movies. Had he watched a Catherine Breillat film festival and survived, my props would have been given to him. Had he lived on the tampon aisle at ShopRite, curled up next to the maxi pads that have wings, while listening to women talk about PMS for 30 days, he would have earned a spot on morning TV. All he did was watch a bunch of movies with his wife, something you’re supposed to do when you’re married. They made it seem like he cured cancer. I’ve seen plenty of chick flicks in my time, and CBS isn’t banging on my door to be on their network. If CBS does bang on my door, it’ll be to sue the shit out of me for Sunday’s entry.

This bullshit gave me an idea: A homework assignment for you! Instead of a 30 movie marathon, though, you’ll only have to sit through three. Call it The Odienator Kings Of Comedy Marathon. 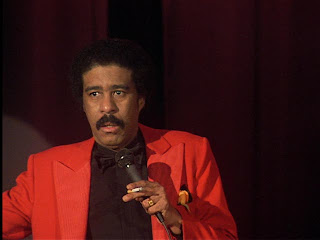 First up, watch the most honest 30 minutes in comedy. At the end of 1982's Richard Pryor: Live on the Sunset Strip, Pryor discusses how he blew up while freebasing. He blames it on an exploding case of milk and cookies at first, but then he launches into a 27 minute discussion on drug addiction that’s startling. He tells us how his drug paraphernalia spoke to him, in eerie, comforting tones, imploring him to never put the pipe down. Jim Brown, Pryor’s idol, tries to talk some sense into him and fails. Pryor talks about how much weight he lost on drugs and how he didn’t even bathe. “Funk was my shadow,” he tells us. Then he blows up, and Pryor puts us on the street with him as he runs off into the night like a merger between the Olympic torch and the person carrying it. “When you’re on fire,” he says matter-of-factly, “people will get out of your way.”

Winos try to bum a light off him as he’s running down the street. Then, at the hospital, the emergency room doctor makes a reference to fried chicken after looking at his patient. Some guy comes in to try and get an autograph, and Richard’s rehabilitation involves a water-based immersion into the lowest depths of physical pain. Pryor caps it off with the funniest Richard Pryor on fire joke he didn’t write.

Cin-togger Haskell Wexler, who shot this picture, keeps Pryor in intimate closeness in the frame during much of Sunset Strip. Pryor tells his freebasing tale with such brutal honesty that Sunset Strip turns into a searing, dark comedy of addiction and recovery. He wants us to laugh at his self-deprecation, but he also wants us to understand the mindset of a man so in thrall to drugs that he can’t function without them. I first saw this film at 12, and it was like Scared Straight for me. The crackheads on my block put the final nail in the coffin of my desire to try drugs, but Pryor’s brilliant routine built that coffin for me. 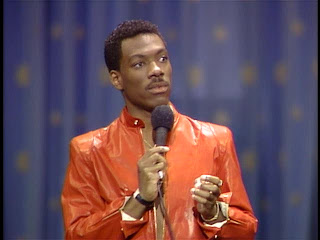 Next, revisit Eddie Murphy’s HBO 1983 comedy special, Delirious. Murphy pays homage to his idol, Pryor, by wearing a red suit and sweating like crazy. I chose this instead of Eddie Murphy: Raw because ED:R, while funny, is a filmed record of Murphy having a nervous breakdown onstage for 90 minutes. Delirious is funnier. All the classic routines are here, from the Ice Cream man to Aunt Bunny’s love affair with Murphy’s stairs to Uncle Gus’ exploding grill burning up Charlie Murphy. Eddie’s Mom throws her shoe and GI Joe goes spelunking in the wrong cave. Delirious also serves as a time capsule of the more un-PC 80’s, with Murphy making comments about gays and AIDS that wouldn’t play today at all

On the 25th anniversary commentary, Murphy talks about the special with interviewer Byron Allen. If you miss Mr. Fuck You Man cussing like his old R-rated self, it behooves you to watch this special feature. 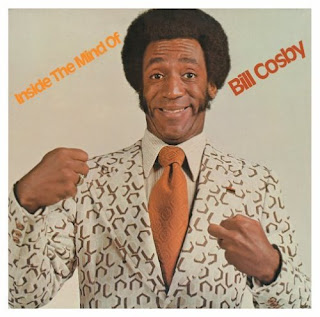 Lastly, catch Bill Cosby’s 1983 comedy film, Bill Cosby: Himself. You might ask yourself how I could put squeaky clean Bill Cosby in the mix with potty-mouthed Pryor and Murphy (Cosby’s concert is rated PG, for cripes’ sake). Cosby will answer this question for you when you watch the film. Five minutes into Bill Cosby: Himself, The Cos talks about drug use, then uses a word you probably didn’t think he had in his vocabulary.

This isn’t the first time I’ve heard the Cos cuss. On a cassette tape I have called Bill Cosby: For Adults Only, the Cos uses the word titties multiple times. Titties, if you’re interested, is the one curse word I was allowed to say as a kid, so perhaps we can give Bill a pass on that one. The word he uses in Bill Cosby: Himself—now that’s a curse word.

Eddie Murphy said that Pryor and Cosby were his biggest comedic inspirations growing up. These comedians have different styles, though I’d argue that Pryor has both Murphy’s penchant for profanity and the Cos’ storytelling ability. Murphy cast Pryor in Harlem Nights, and 12 years prior (no pun intended), the Cos and Richard appeared together in Neil Simon’s California Suite. I’m sure Cosby would have appeared somewhere with Murphy had the latter toned down his filth-flarn-filth. You can make them appear together by doing your homework.
Posted by odienator at 1:47 AM

I loved SUNSET STRIP then, and I had the vinyl LP as a 14 year old before even seeing the film (hey, it was rated R :). Still do love it, but I like the original RICHARD PRYOR LIVE from 1979 even better. They're both great but the 1979 LIVE is the greatest live standup performance I've ever seen on film, just because of the amazing range of topics, voices, and slightly more physical humor pre-accident. They're both great though. Even HERE AND NOW, though it ranks third, is still good. Never was such a thing as a bad Pryor show. Or album. Even the Laff efforts.

I'll confess that RAW hasn't aged well at all for me, except for the great Pryor/Cosby bit to start it off. Still a shame that Murphy stopped doing standup altogether.

HIMSELF is as rewatchable a standup flick as has ever been made.

It is a shame that no one ever did a feature length Redd Foxx standup movie sometime in the 70's or early 80's. As the man who influenced Pryor and Murphy, and who was remarkably consistent on his LP's no matter which label (I'm most partial to the King LP's that were recorded at the Redd Foxx Club just before his TV success though), it would really be nice to have his legacy preserved in the same way with a full length feature.

Thank you for sharing this information. The information was very helpful and saved a lot of my time.