I started the One Drop of Black Cinema series to call out famous people who got their start in Blaxploitation. People like Joel Schumacher and Spielberg editor Michael Kahn got outed, though I highly doubt either of them were in the Black movie closet. They just never mentioned certain movies when they were discussing their careers. I mean, even Julianna Marguiles mentioned her 2006 exploitation movie, Snakes on a Plane, in a recent awards speech. She said her parents weren't proud of that movie, but I had a good time watching it. And I'm sure she got paid well to do it. Plus, it's a lot harder for actors to hide from their movie pasts because we can see them on the screen. The people behind the camera are a different story.

Getting your start in Black cinema is one thing we point out in this series, but what about people who spent the twilight of their career in Blaxploitation? There are more people than you think.

In a career that spanned 5 decades, cinematographer Lucien Ballard worked, in both black and white and color, with some directing greats. Josef von Sternberg gave him his start in 1930 as a camera operator on Morocco, and he worked with the great director several more times, including on the Peter Lorre version of Crime and Punishment (which, according to imDB, netted him his first on-screen credit). Ballard would later work with legendary directors Henry Hathaway (whose last film was a Blaxploitation quickie called Super Dude), Sam Peckinpah, Stanley Kubrick and Budd Boetticher. These directors trusted Ballard's excellent widescreen work, and excepting Kubrick, used him multiple times. Kubrick's The Killing benefitted from Ballard's expertise, but unlike the other directors listed, Ballard and Kubrick didn't hit it off.

The Cinematography branch hated Lucien Ballard, putting him in good company with cin-tog legend Gordon Willis. Ballard was nominated only once for an Oscar, and it wasn't for what I'd consider his best work, The Wild Bunch. He was nomed for a Joan Crawford picture called The Caretakers. Ballard shot 130 films in his career, most of which were done in the days when you had two chances to be nominated for cin-tog, yet the Academy repeatedly snubbed him. This despite his invention of the Obie, a light he created to hide then-wife Merle Oberon's accident scars, and his work with legend Gregg Toland on how best to shoot Jane Russell's 18-hour bra fillers in Howard Hughes' The Outlaw. He made women's faces look hotter (the Obie was used for years) and their titties look great, and the man still couldn't get a break from his peers. Damn.

Completely by accident, I stumbled upon the late career Blaxploitation work of Lucien Ballard. When I wrote about Anna Lucasta, I noticed that Ballard shot it. The cin-tog in that film is well done, especially the way he lights Black faces. This led me to drill into his list of films on imDB to see if he had done any other films of that era featuring actors of color. Sitting near the top of the list on imDB (which sorts films in descending order) was a film I've mentioned at least six times in the three years I've run Black History Mumf, Three the Hard Way.

This shocked me, not because of the film but because I remembered that Three The Hard Way looked god-awful whenever I saw it on TV. It even looked bad on the old VHS copy I had back in the late 80's. There's only five years between The Wild Bunch and Jim Brown, Jim Kelly and Fred Williamson kicking ass and taking names. What the hell happened?

While at Target looking for a completely different DVD, I stumbled upon a Warner Bros. four pack of Blaxploitation movies for $10. One of them was Three The Hard Way, so I bought it. I hadn't seen the film in 25 years. The box promised me a widescreeen transfer of the original R-rated print (the VHS was a butchered PG-rated print), but for $2.50 I wasn't expecting Warners to comply. The DVD was so cheaply made it didn't even have a menu with scene selections, but it was widescreen and was also most definitely an R-rated cut.

I'm not going to lie: Three the Hard Way played better in my memory than it did on my screen after a 25 year absence. One improvement that was made by the DVD was putting Ballard's cin-tog back the way he shot it. While it's occasionally too dark in a few night scenes, for the most part it looks fine. Ballard even has a few clever camera tricks up his sleeve, aided and abetted by Super Fly director Gordon Parks Jr. This was the second feature Ballard shot for the younger Parks; the first was a Colorized Bonnie and Clyde knockoff called Thomasine and Bushrod, unseen by me and probably for the best.

Blaxploitation stars. Jim Kelly, the kung-fu hero fresh off Enter the Dragon, Jim Brown, the gridiron legend turned movie star and Fred Williamson, star of Black Caesar and one year away from producing and directing his own features. This was like the Black version of Sly Stallone's upcoming all-80's action stars feature, The Expendables. I remember going to see it at the Pix Theater in Jersey City on a double bill with, I kid you not, some Zorro movie.

The plot of Three the Hard Way is merely an excuse for our heroes to shoot, stab, and karate chop about 200 people to death. Seems an evil White supremacist has developed a toxin

that's lethal only to Blacks. There's some mumbo-jumbo about sickle cell anemia in the dialogue to make this bullshit sound legit. The plan is to put it in the water supply of Los Angeles, Washington D.C. and Detroit so the Afro Sheen company can go out of business. "It took God seven days to make the Earth," says our head baddie who looks a bit like Howard Cosell. "It'll take us three days to cleanse it."

Not if our Afro-ed heroes have anything to say about that. Record producer Jimmy Lait (Brown) is busy producing his group, The Impressions (who provide the film's soundtrack). He learns of the plot from an old friend of his who has escaped from the compound where the supremacists are doing experiments on kidnapped Black people. The old friend seems delusional, so Jimmy doesn't believe him until the friend winds up dead and Jimmy's main squeeze, Wendy (Sheila Frazer) is kidnapped.

After nearly beig murdered, Lait seeks out help from his old friend in Chicago, Jagger Daniels (Williamson). Jagger is skeptical about the plot until a shitload of White people try to

kill both of them. Now convinced, the two head to NYC to hook up with Mister Keyes (Jim Kelly) a martial arts master who runs a Tae-Kwon-Do dojo. We meet Mister Keyes (whose first name is Mister) in Kelly's most famous scene. After some crooked cops plant cocaine in the red velvet interior of his car, then try to arrest them, Kelly says "gonna set me up?" and then dispenses a ridiculous and exciting slo-mo ass kicking on numerous cops, none of whom are smart enough to pull out a gun and shoot this spin-kicking Negro. He's going in slow motion, for Pete's sake!

As soon as Mister finishes treating the cops like Miss Celie, Jagger and Jimmy show up. They fill him in and then set out to find the supremacist group's whereabouts so they can stop the genocide. As luck would have it, they capture one of the group's men. When he refuses to talk, Jagger calls in three women on motorcycles. One's Black, one's White and the other's Asian. Each is a dominatrix, and each is topless for most of their screen time. We never see what they do to prep the guy for questioning, but when Jagger and Jimmy enter the room, he's sweaty, freaked out and ready to talk. After getting the information from the nearly nude, crying racist, the women return, still topless, for round two of whatever it is the film doesn't want to show you (but I really wanted to see). The guy takes one look at them and drops dead. 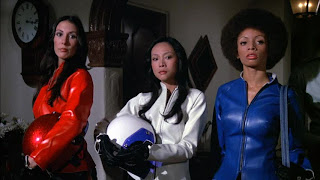 The White supremacists deploy their minions to poison the water supply, and each of the three attempts is met by our heroes. A lot of people get killed, my favorite being a guy who

drives a truck through the most explosive billboard in God's creation. Our heroes find their way to the compound where the group does its experiments, shoot a hell of a lot of people. Just like in I'm Gonna Git You Sucka, Jim Brown's gun never runs out of bullets. Then the film runs out of money and ends abruptly on a freeze frame of an exploding Cadillac.

Ballard would go on to shoot a third Blaxploitation movie, Drum, the "sequel" to Mandingo. Drum might have been more fun (and more seedy) to review, but I didn't have a copy of it, so here we are.

After doing a film with Elaine May, Ballard's last fiction film was Joan Rivers' directorial debut, Rabbit Test, one of the worst films ever made. Usually there's no place to go but up after Blaxploitation; Ballard proved that theory very wrong.
Posted by odienator at 10:51 PM

I just watched this again yesterday and, much like what you said, it was much better in memory than when seen again for the first time in over twenty years. It's not horrible or anything, but the one thing that really stuck with me was the very memorable appearance of The Countess, The Empress and The Princess. Man, do I wish we'd seen more of them!

Bunche, you and I are on the same page with the movie and its hot, leather-clad weapons of mass destruction. I'm going to have to disagree with you on Trouble Man, which I wrote about in the 2008 series under the Michael Kahn entry. I was never a big fan of that movie outside of the score and a few action sequences. It is, as you state, a much more polished affair than Three the Hard Way.

A few weeks ago, over at The House Next Door, I wrote these entries on Film Noir from the Noir City Fest in San Francisco. It's funny that Three the Hard Way is from the old Monogram Studio, the poverty row studio in Hollywood that turned out low budget gangster features. They changed their name to Allied Artists and that's the studio that made Three the Hard Way. I guess once a cheap ass studio, always a cheap ass studio.