Quick and Dirty: The Blind Side 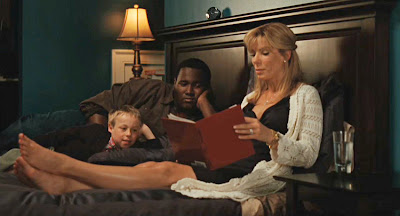 by Odienator
(for all posts, go here)

It's the sport of kings,
Better than diamond rings,
That's why we're here to sing
Football.
-LL Cool J

Why are you here today? Shouldn't you be getting a $1 million lecture from Tim Tebow's Mom about how your vagina belongs to Jesus? Shouldn't you be watching Peyton Manning throw Sony pitches and touchdowns? Shouldn't you be marveling at the stupid shit Bud Light makes dumb White guys do in pursuit of their vile-tasting beer? Because you decided to show up, now I gotta work! (Actually, I'm nowhere near this blog; I'm currently drinking 22 year olds under the table at a bar, but never mind.)

Back in my Mom's day, there was a TV show called Queen For A Day. It was really progressive. See, they got a man from the audience, brought him on stage and turned him into a flaming drag queen for a day. Macho construction workers from Brooklyn were turned into perky housewives, complete with dress, heels, makeup and wig, and then they were given washer-dryer sets and pots and pans. The men, liberated from their closeted existence, would weep and cry with impunity as tiaras were put on their heads. For a 50's show, this was shocking.

OK, this isn't completely true. I'm just checking to see if you actually read everything I write.

I'm granting Ms. Bullock a temporary Ghetto Pass today because some people have written that the NAACP award nomination came out of desperation on the organization's part. Some folks have said her nomination came because the group couldn't find a credible Black actress to fill the fifth slot. This is simply not true. For all my problems with The Blind Side, Sandra Bullock is not one of them. She really is good, and she deserves not only her NAACP award nomination but her Oscar nod as well. Hell, country singer Tim McGraw is shockingly good in this movie as well. 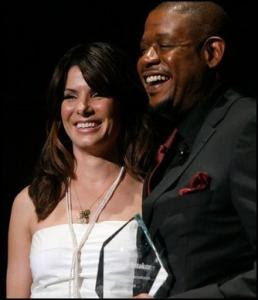 The haters forget that Ms. Bullock has appeared in more movies with Black people than a lot of Black actors. Let's see: She was in A Time To Kill with Samuel Yell Jackson. She was in Demolition Man with Wesley Snipes. She helped wreck Glenn Plummer's car in Speed. She took marching orders from director Forrest Whitaker in Hope Floats. Regina King was driven crazy by Bullock in the second Miss Congeniality movie, and Ernie Hudson shows up in the first. Nia Long makes an appearance in one or more of the realities in Bullock's Premonition, and Keith David wishes he were elsewhere in All About Steve. All this, and I haven't even mentioned a certain piece of shit movie about race relations that won not only Best Picture but the NAACP Best Picture award as well. There were a lot of Black folks in that.

So, if people are going to bitch about Bullock getting a Black award nomination, I'm going to use it to make her an honorary Negro for a day. Try and stop me!

I have mixed feelings about The Blind Side. The trailer made my skin crawl. Then I read the book by Michael Lewis, which is a lot more complex and knowledgeable than the movie that resulted. Writer-director John Lee Hancock, who made the absolutely wonderful baseball film, The Rookie, removes several layers of complexity from both the Tuohys and their huge, adopted Negro. He gives us the standard film scenes of the enlightened White person defending her Black ward from her snobby, unenlightened friends; and other scenes where it seems Michael Oher (played by fellow NAACP nominee Quinton Aaron) is mentally challenged. The real story has the potential to become a movie that's like bad Stanley Kramer, and unfortunately, The Blind Side treads perilously close to that numerous times.

It's odd that the subject of The Blind Side has so little dialogue in the film. Aaron captures the gentle giant spirit very well, especially in scenes with the Tuohy son, S.J., but I hungered for more time to understand his internal workings. This is a wounded young man, and rather than process his pain through a Black filter, I'm getting him strained through the usual White characters' colander. The true story hits certain points I accepted despite their Noble Negro status, but the film's simplicity makes them more black and white than their actual grays. Hancock tries to balance things out. For example, the sinister Black woman who interrogates Oher late in the film has something of a counterpart in Kathy Bates' fine turn as Oher's tutor with ulterior motives, but his screenplay is still flatter than necessary. 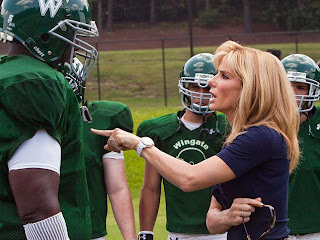 Bullock almost saves the film. Leigh Ann Tuohy has several moments that endeared me to the actress and the character. After Oher's first night with the Tuohy's, Bullock's comment about what to do if anything's missing is jarring and real. Her body language around Oher changes as the film goes along; she subtly becomes more motherly and protective, which is amusing since Hancock frames her scenes with him to maximize the size difference between the two actors. I started to believe her without question, and she almost made me forget that I was watching cliché after cliché. Her scene with Oher's mother is questionable, but both she and Adriane Lenox act the hell out of it. As the film progressed, I found it useless to fight this headstrong White woman. Half my brain was pointing out all the things I'd love to mock, and the other half kept saying, "yeah, but you can't deny that it's effective."

This year, nothing I say about the Oscars can curse a Black actor's chances because they moved the ceremony back to March. While I'm rooting for Gabby Sidibe in the actress category (we know Mo'Nique's winning supporting, or Mary Jones is gonna beat the Academy with a frying pan), I wouldn't be destroyed if Bullock won. Now, if she wins the NAACP award, she'd better thank us for making her Black for a Day. I'm just sayin'.
Posted by odienator at 7:53 PM

My father loves Ms. Bullock's movies even he got all his movies and he still watching them because he's a loyal fan.Generic Viagra Buy Viagra