When I Grow Up I Wanna Be: John Shaft

By Odienator
(for all posts, go here)

Every year, I introduce a new weekly feature to Black History Mumf. The first year it was Imagery Saturdays, the second, Musical Mondays. This year I’ve decided to forego my day of the week panties imitation to focus on movie characters I wish I’d grown up to be. I won’t be restricting the day in which these appear because I like spontaneity. These characters won’t 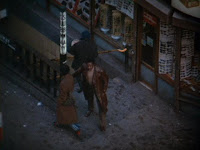 always be good, and they won’t always be men either. Some would call this a daring move, but if you think I care what your opinion of me is, you must either be a new reader or forgetful as hell. If I am to be true to myself, I need to start with the character I’ve wanted to be since I was a kid. Ask yourself “Who’s the Black Private Dick that’s a sex machine to all the chicks?” It’s not your friendly neighborhood Odienator, dammit, but I wish it were.

1971’s Shaft is the Goldfinger of Blaxploitation. Sure, Sweet Sweetback started the trend, which makes it the Dr. No of Blaxploitation. But as with Bond’s third feature, Shaft refined and set the characteristics of the movies that would follow in this genre. After Shaft was a success, a whole slew of titles appeared with people’s names and/or occupations in the title: Cleopatra Jones, Truck Turner, Super Fly, The Mack, Trouble Man, and my fave guilty pleasure, Willie Dynamite. Pam Grier made an institution out of movies with her character’s name in the title.

Earth, Wind and Fire did Sweet Sweetback’s music, but at the time, they were relatively 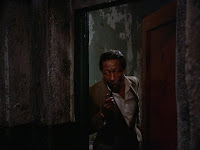 unknown and—this is important—what they came up with sounds terrible. (Even one of the singers comments on the Sweet Sweetback DVD that “we sounded so bad!”) Gordon Parks hired songwriter-turned-singer Isaac Hayes, and his Oscar-nominated score led other Blaxploitation movies to hire established soul and funk artists to craft their scores. James Brown, Marvin Gaye, Willie Hutch and Curtis Mayfield lent their skills to the art of cinema, with Mayfield’s Super Fly soundtrack surpassing what Hayes did with Shaft.

Shaft also ensured that our Blaxploitation heroes were dressed to the Nines, although looking back, that’s probably not something to be proud of—this is 70’s fashion. To this day, I refer to my three-quarter leather coat as “my Shaft coat,” but you wouldn’t catch me dead wearing some of the shit people had on in these movies nowadays. You WILL find pictures of me wearing child-sized versions of some of it, but I can be forgiven for my parents’ attempts to keep me in vogue back then. My brain is flashing back to a picture of 3-year old me in a Superfly coat and hat, a picture I’ll post if I can find it. 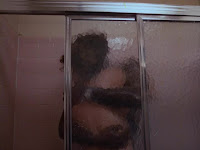 Lastly, Shaft introduced the hero’s stable of women. Shaft only has two, far fewer than some of the later heroes, but they establish the convention. He’s got the sassy Black one and the eager and willing White one. Here, however, the White woman is a lot more mouthy than her later ilk were allowed to be. She stands up to Shaft, responding to his requests by saying “Get it yourself, shitty!” The Black woman is his main squeeze, and squeeze him she does when she has an incredibly big O courtesy of Shaft's shaft.

Lest you think I’m pulling too much rank on Sweet Sweetback’s importance, I must acknowledge that, until van Peebles’ film came out, MGM had been working on a White detective story. So without van Peebles’ odyssey, Shaft might have been The French Connection. More Oscars would have been had, but I wouldn’t be writing a piece about how I wanted to be Popeye Doyle. I’m still trying to figure out Gene Hackman's racist insults.

Despite what John Singleton tells you, Shaft is Richard Roundtree. Sam Jackson is a bad mother-shut-yo-mouth, but Eve’s Bayou notwithstanding, he’s no sex machine. Singleton’s version of Shaft should never have been made, a fact made more evident by Singleton’s casting of Roundtree in a small role as Sam’s uncle. Roundtree still looks good and walks off with two women, two more than Jackson gets. This supposed torch passing looked more like original Shaft blowing the torch fire out and leaving new Shaft holding a smoking stick with a “WTF?” expression on his face.

I’m Gonna Git You Sucka tells us every Black hero has theme music. Shaft’s won the Oscar, and we are privy to it not 30 seconds after the MGM lion says hello. I’ve written about this opening before, but it bears repeating that every time I step out of the train station in Times Square, I hear this music. Shaft emerges from the depths of the Earth and proceeds to own the streets of New York. He jaywalks with impunity, scares off a guy selling hot watches, and gets a message from a stuttering, blind newsman named Marty. Marty gets the best line in the picture. When the newsman tells Shaft some guys were looking for him, Shaft asks if they were “Harlem cats?” The blind newsman’s answer is perfectly logical. 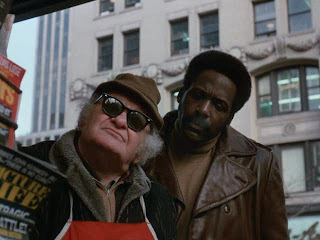 “How the Hell should I know? Everybody looks the same to me!”
Speaking of that music, I have a theory about Blaxploitation themes: If the hero’s theme starts out with a bassline, he’s on the wrong side of the law. Super Fly’s familiar opening immediately vibrates the car, and Youngblood Priest is a drug dealer. Had director Larry Cohen known anything about Black music, he wouldn’t have rejected James Brown’s The Payback for Black Caesar’s theme. The Payback, especially its opening notes, is perhaps the most sampled song in rap music history, and would have made one hell of a bad guy revenge movie song. Any other type of musical opening, and the character’s on the up-and-up. Trouble Man starts with drums and piano and Shaft starts off with those high hats and the wah-wah guitar. Both main characters are private detectives. 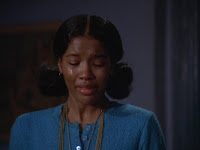 Gunn). In order to crack the case, he hooks up with some righteous bruvas, does his best to avoid the Mob and builds a humorous and frustrating relationship with Lt. Vic of the NYPD (Charles Cioffi). Buoyed by Black Moses’ score, especially in the film’s Soulsville sequence, Shaft throws us into 1971 New York. Roundtree makes a handsome and cocky tour guide.

Director Gordon Parks (the first Black director to helm a studio picture, 1969’s The Learning Tree) keeps the action exciting and the scenery gritty. Screenwriter Ernest Tidyman adapts his own novel and gives Roundtree and company numerous memorable and snappy lines. Since I’ve talked about this movie many times before on the blogosphere, I’m going to shut up and let the movie speak for itself below with my favorite lines and shots. 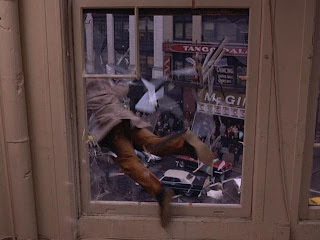 “That’s some cold shit, throwing my man Leroy out the window.” 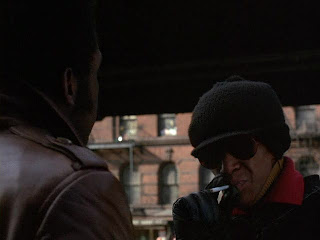 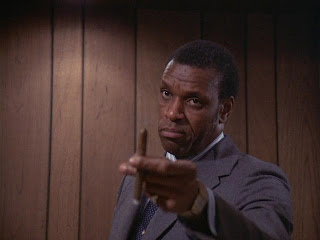 “Don’t you try to bullshit me boy. We’re all on the hustle. I sell broads and dope and numbers. You sell crap and blue sky. It’s all the same game.” 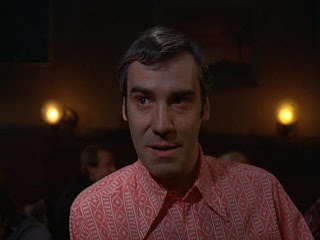 “I told her I was gay, and she said she would straighten me out! That's what she said! Not enough that I’m lovely, now she wants me to play character parts!” 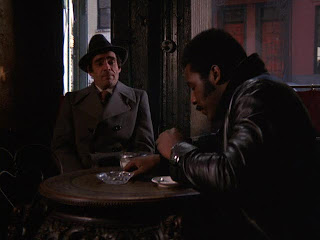 “I’m lookin’ for a nigger named John Shaft.” “Well you found him, wop!” 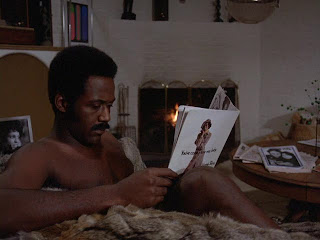 Ladies, how would you like to come home to this butt naked Negro on your couch? 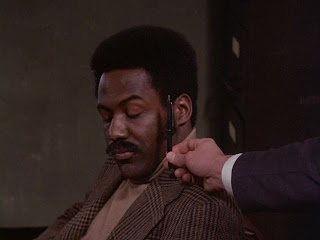 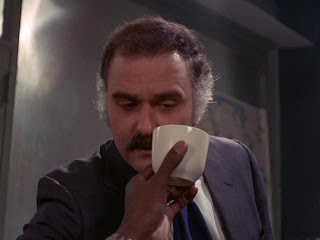 Shaft: And you ain't that White. 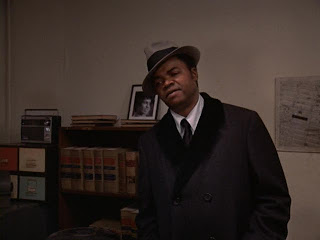 Take Shaft's advice to Willie. Heh-heh-heh! I said Shaft and Willie!
Posted by odienator at 6:17 PM

"This supposed torch passing looked more like original Shaft blowing the torch fire out and leaving new Shaft holding a smoking stick with a “WTF?” expression on his face."

I felt pretty much the same way about that misbegotten 2000 remake. Yeeeesh.

The fact that it was an angry white vigilante cop picture that just happened to be cast with Samuel L. Jackson is a whole other matter. Fuckin' thing just didn't make any cultural sense.

Matt, the only plus of Singleton's Shaft is Jeffrey Wright's absurd take on Hispanics. I couldn't believe he got away with that performance, but somehow he does.

Had Singleton wanted a better idea for his reboot, he could have had Jackson as the Moses Gunn character and Roundtree as Shaft. That would have been interesting.

Wright was amazing in that. I thought Christian Bale was good, too, making an implausible character plausible (mainly through his specialty, the ability to project coiled rage). It had that "Batman" problem, though -- too many bad guys. Plus other problems mentioned above.

The sight of Wright perforating himself with that icepick to emphasize his rant was worth the price of admission.

Wait a minute...I just remembered, I saw it for free.

You didn't mention my favorite bit in the original - when the mobster spits at Shaft in the bar, and Shaft retaliates by smashing a bottle of Scotch on his head!