by Odienator
(for all posts, go here)

Odienator note: Greetings from Pacific Time, folks. I'm in San Francisco this week for a big work conference. The pieces may be up a little later than normal due to the time change, but I'm going to try to keep posting one a day while I'm here. Wish me luck! 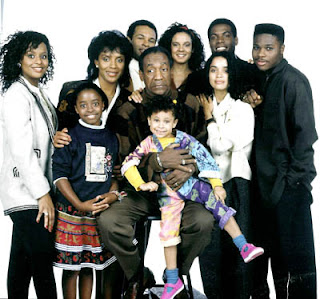 In the early days of family sitcoms, Father Knew Best. Beaver and Wally may have been good kids, but when they messed up, Ward Cleaver aired them out. “Gee, Ward, you were kinda hard on the Beaver last night,” jive-talking Barbara Billingsley would say. We knew she wasn’t talking about coochie. That’s why we loved Leave it to Beaver; like us, the kids on that show got their asses whipped.

When Good Times had John Amos, we saw Thelma, Mike and J.J. treat him with respect. Several other shows, from My Three Sons to Andy Griffith, had kids who would defer to their father’s knowledge and advice. Hell, even Arnold, Willis and Kimberly looked up to Mr. Drummond on Diff'rent Strokes—and they all grew up to be criminals!

At some point in sitcom land, it became unfashionable for parents to know best. The kids started taking over, getting the laughs and talking to their parents in ways that would have made Ward Cleaver forego the belt and pull out the ironing cord. Into this atmosphere of kids know best sitcoms, Malcolm Jamal Warner went to audition for a new sitcom on NBC. The story goes that Warner read his dialogue to his father with an attitude. After the scene ended, the actor playing Warner’s father asked him “would you talk to your father like that?” When Warner said he would not, Bill Cosby asked him why he was doing so in the scene. Warner re-read the scene with respect and deference and the Cos cast him as his only son, Theo Huxtable, on his new sitcom, The Cosby Show.

The Cosby Show debuted on NBC In 1984. It finished third in the ratings in its first year, then held the #1 spot in the ratings for five straight years. At the center was a successful set of parents and their five kids (well, at first it was just four). The show ran until 1992, created one spinoff and left us with many great, hilarious moments in television. Black legends like Sammy Davis Jr., Stevie Wonder and Lena Horne made guest appearances. Roscoe Lee Browne played cards and recited Shakespeare with Christopher Plummer. John Ritter played a clumsy, freaked out Dad, Danny Kaye a creepy dentist, and Brazilian sexpot Sonia Braga played Miss Westlake, a math teacher so tough she made her students forget she was HOT.

At the height of its success, many people complained that the show was not a realistic depiction of a Black family (“they are so bougie,” I remember one of my classmates saying). The only thing I found questionable was how people the complexion of Phylicia Rashad and Bill Cosby could have made children as light as Denise and Sandra. Other than that, the Huxtables felt like my family. We didn’t have any money, but the family dynamic was the same. My Mom had the wisdom of Clair crossed with the profanity of Pryor. She was always hounding my Pops about what he ate and drank. Though there were five of us, we were the inversion of the Cosby clan. My sister reminded me a lot of Rudy, as she was the same age as Keshia Knight-Pulliam when the show debuted. My brother was always goofing off in school, just like Theo. And my Pops, while nowhere near as funny as Bill Cosby, was always making funny comments and being flustered by my Mom’s uncanny ability to be right.

I never bought the criticism that the Cosby Show wasn’t Black enough. Blackness seeped from every pore of the show. The grandparents’ discussions about civil rights marches; the constant mention and playing of jazz and blues; the occasional guest appearance by a 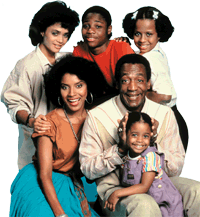 pioneer of Black music or acting; Clair’s worry about Cliff’s salt intake affecting his blood pressure and heart; these were all woven subtly into the show. There was even an episode about the fictional historically Black college the Huxtables attended, an episode I admit I found extremely boring. That episode eventually brought about an easy way to dump Denise after the actress who played her got all freaky-deaky with voodoo and Mickey Rourke. A Different World was television’s first exposure to the world of Black colleges, and it was spun off from a show people said wasn’t Black enough.

Sure these folks had money, but they weren’t the first wealthy Black people on television. With five kids, you need an obstetrician father and a lawyer mother just to pay the bills. Cosby challenged the notion of a family of color on TV in Reagan’s 80’s. Think about all the Black shows on TV prior to this, and of what the family consisted. Julia was a widow with a six-year old son. The son on Sanford and Son was grown, as was The Jeffersons’ son. What’s Happening had only Mabel King as a parent, and though Good Times presented a complete family at its beginning, Esther Rolle eventually wound up saying “Damn! Damn! Damn!” By the end of The Cosby Show’s run, Cliff and Clair were still together and the family was intact despite numerous trials and tribulations.

Cosby reset our expectations during the first show. Cliff (who was Clifford back then, not Heathcliff) and Theo have a conversation about the latter’s lousy grades. Theo gives one of the typical sitcom kid knows best speeches, telling Cliff he should love him despite his bad grades, because he’s his son. The audience applauds. Cosby pauses, waiting for the studio audience applause to die down. Then he says, with perfect comic timing, “that’s the dumbest thing I ever heard!” He then tells his only son “I am your father! I bought you into this world, and I will take you out.” Somewhere Ward Cleaver was snapping a belt and saying “Amen to that!”

Cliff and Clair interacted with their kids in ways that were not uncommon to Black folks, nor to folks of other colors. The kids were grounded when they misbehaved, and in one episode, Clair is so pissed at Vanessa that Cliff has to practically stop her from literally getting on Tempett Bledsoe’s backside. The duo offered support when their kids were facing the normal crises, things like broken hearts, dead pets, and even peer pressure. They dealt with drugs and teenage pregnancy (Sunshine from Harlem Nights gets knocked up!) without being preachy. The drug episode, where a joint is found in Theo’s book, is no “very special episode of Diff’rent Strokes with Nancy Reagan.” It may have been a little more innocent than what would normally transpire in this scenario, but at least it was touched upon by the show.

The Huxtable children were unique in their personalities and realistic in terms of the family dynamic of five. Sandra (Sabrina LeBeauf) was the typical eldest, Denise was a whackjob at the age where a teenager would wear weird things and listen to weird music. (Cliff’s response to her choice in music is a memorable piece of facial pantomime.) Theo is a goofy teenage boy filled with misguided ideas about women and life, supplied mostly by his friend Cockroach (Carl Anthony Payne). Vanessa is a tattletale who loves to get her brother in trouble, and Rudy is the baby of the family, who sometimes seems more mature than most of her siblings. We watch them change and grow, and the show remains true to the characteristics laid down in the early seasons of the show.

And The Cosby Show followed through. Theo’s trials in school were a source of amusement, but he would eventually be revealed to be dyslexic, a trait shared by Cosby’s late son, Ennis. While that explained Theo’s early academic struggles, the show later showed him trying to overcome the disorder so his grades could improve. The show also dealt with what happens when one’s children do not follow the path their parents hoped they would. Kooky Denise (Lisa Bonet) dropped out of A Different World’s college, married a Navy man and (worst of all) brought a Rudy wannabe onto the show. Cosby also showed what happens when one’s children start having children of their own, bringing not only the joys of grandparenthood but the amusement of watching how those children handle parenthood and marriage. Sandra's husband, Elvin (Geoffrey Owens) needed all the help he could get from Cliff Huxtable regarding dealing with women. (Remember Cliff's advice? I still use it to this day. Just throw up your hands, men.) 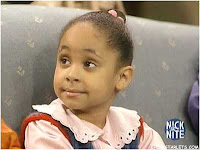 Speaking of that Rudy wannabe, I don’t believe the appearance of Raven-Symone’s Olivia (who mysteriously shares the middle name of Clair Huxtable) is when the show jumped the shark. I felt the show started to go downhill (though it remained watchable) when they brought in Erika Alexander’s Pam. Pam was a cousin from the rough side of town, and it always felt like she was bussed in to silence the critics who thought the show wasn’t real. It felt like they got Pam from the Goodwill, not from any real ‘hood I knew of, and I never warmed to her character. Pam would later team up with Cockroach on Living Single, a show I enjoyed her work on much more than here.

The Cosby Show may have been important, not just to Black viewers like me but to ratings-starved network NBC, but first and foremost, it was funny as hell. It benefitted from recurring supporting characters (I always liked Buuuud and Peter, the chubby kid who was always running from the Huxtable residence) and folks who made one-time appearances (Bill Irwin’s vaudeville clown, Adam Sandler’s friend of Theo, Roscoe Lee Browne’s professor), not to mention memorable plot lines: Rudy’s dead goldfish, Lamont; Theo’s money lesson; Vanessa sneaking out with makeup on; Denise’s attempt at fashion design; and the numerous embarrassing stories told about Cliff by his parents (Earle Hyman and Clarice Taylor). I could watch these reruns a million times.

Cliff’s parents are the subject of my favorite Cosby show episode, and maybe my favorite sitcom episode ever (maybe second, after Mary Tyler Moore’s Chuckles Bites the Dust episode). It’s their 49th wedding anniversary, and the family puts on a show with a little help from Ray Charles. The family’s lip-synching is taken to new levels by 6-year old Rudy’s interpretation of Marjorie Hendricks’ pleading solo on the record. “Baby!!!” screams Hendricks, channeled by Emmy-award nominee Pulliam’s accurately rendered body language. “Bay-Beeee!” The surprised look on Taylor and Hyman’s faces always made me wonder if they were seeing this number for the first time. I can’t listen to that song without seeing Rudy Huxtable at the foot of the stairs, lip synching better than her older actors.

Outside of Seinfeld, I never watched another sitcom as religiously as I watched The Cosby Show. From its yearly change of opening titles (and the different musical interpretations of Stu Gardner and Cosby’s theme music) to its numerous attempts by Cliff to enjoy his hoagies, soda and chips, I never missed an episode. Cosby went on to do another show with Rashad, a meaner CBS sitcom whose true shining star was the late Madeline Kahn, but it was not as successful nor as innovative as his NBC sitcom. The sitcom universe went back to the kids (witness The Simpsons, the show that eventually put the Cos to bed) but it was nice to remember once again a time when the parents were wise and the kids weren’t wiseass.
Posted by odienator at 11:31 PM