By Odienator
(for all posts, go here) 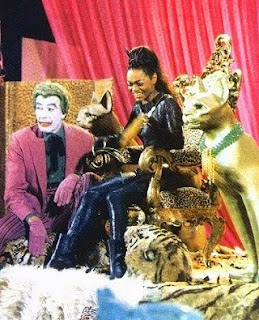 The first thing I remember Eartha Kitt for is the Black Catwoman on reruns of Batman. While I wouldn’t have kicked any of the three actresses who played this role out of bed, Kitt always held a special place in my heart. I would find out more about her later, but at the time, she was just the cat-like lady Batman could somehow resist. Until I was a teenager, this was the only place I would see Eartha Kitt; like Bernie Mac, she said some things at a political function that got some people upset. She was pretty much banned from the American airwaves.

When Kitt re-emerged on my radar in the 80’s, I learned that she was a singer. She had been singing long before I existed, but remember, all I knew of her was Catwoman. I wasn’t aware at the time that she was willing to fuck Santa Claus in exchange for lavish gifts. Santa Baby, her 1953 hit, is the original golddigger song, with Kitt implying with her voice what the censor wouldn’t allow her to say: At her house, trim is a noun during Christmas. Santa Baby holds the distinction of being the most disturbing Christmas song behind Santa Claus is a Black Man (I ain’t even gonna link to that—find it yourself.) Kitt had numerous other hits before her fateful day with LBJ sent her to Europe for a decade. She returned in 1978 to do a Broadway play called Timbuktu, but I don’t remember seeing her again before the 80’s.

As a teen, I remember watching Hot Tracks, a video show created for all the videos MTV would not show (read: anything with a Negro in it). They showed Eartha Kitt’s first music video. She was almost 60, yet was still looking to jump rich men for money. The song, Where Is My Man, was absolutely dreadful, one of the worst things I’ve ever heard, but it was a hit and suddenly Eartha Kitt was everywhere again. This is the second thing I remember about Eartha Kitt. Santa Baby is the third; I didn’t hear it as a kid because my family’s ghetto Christmas songs package consisted only of Otis Redding, The Temptations and Donny Hathaway.

Most people my age remember the fourth thing I recall about Kitt: Her performance as Lady Eloise in Eddie Murphy’s 1992 raunchfest, Boomerang. I’ll be writing about Boomerang later this month. For now, I’ll say that, after Boomerang, I can’t look at Eartha Kitt without thinking of going Commando. 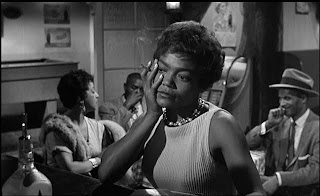 My nieces and nephews know Kitt from her Emmy winning voiceover work on Disney’s The Emperor’s New School. My parents knew Kitt from her movie work in the 50’s, including St. Louis Blues and Anna Lucasta. I recently found a copy of Anna Lucasta in a DVD bargain bin and I bought it. It felt noirish, based on the cover, but the cover was misleading.

Lucasta shows Kitt at her sultry, sexy best. She’s the titular character, the lead in Philip Yordan’s play. Filmed before in 1949 with Paulette Godard, 1959’s version colorizes the material by casting Kitt and Sammy Davis Jr. Anna Lucasta (Kitt) is a prostitute working a bar on the San Diego piers where the sailors come in for drinks and a good time. She’s been thrown out of her home, but now her father has come back to reclaim her at her family’s request. Her kin’s intentions are far from noble: They want to marry her off to a family friend’s son so they can get at his money. Anna leaves Danny (Davis), the sailor with whom she’s shared many a good time, and returns to the family home somewhere in California.

Her brother in law tries to keep the family’s intentions from her, but when she finds out, Anna plays along. Things backfire when she actually falls for the guy, Rudolph Slokum (Henry Scott). Even though this is the plan, the Lucasta patriarch is not happy and sets out to destroy Anna’s life. Joe Lucasta is played by de Lawd hisself, Rex Ingram. Ingram is intense, if not completely over the top, as the alky dad who, at least according to my reading, is sexually interested in his daughter. It’s the only explanation for his jealousy and his violence. Booze isn’t enough of an excuse. This would be far more subversive if it weren’t played to the rafters.

Up until the three-quarter mark, Anna Lucasta is entertaining. Davis is especially good as the tough sailor (he’s a scrappy bastard here) and Kitt looks delectable. The family, outside of Dad, are comedic greedy characters. Their interactions with Anna, as well as her courtship by Rudolph, 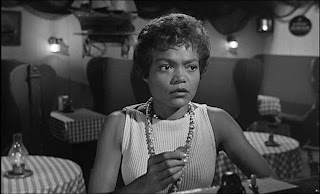 keep things moving with the help of Elmer Bernstein’s score. Then without warning, the movie completely disintegrates. Joe Lucasta does something vindictive and Anna immediately forsakes her marriage vows. This leads to a fantasy Sammy Davis Jr. dance number (I guess they figured “well, since we have him…”) and an ending that is unsatisfying and unresolved. Anna cries for a relative who was extremely abusive and we aren’t given a big reconciliation or showdown with the one innocent character in the film.

In hindsight, I should have just watched reruns of Batman, or Kitt’s best film, St. Louis Blues, over again as prep for this brief remembrance; I wanted to try something new. No matter. I’m just glad I was able to fit this minor tribute to Kitt into this year’s series. I hope that wherever she went after she left this plane is filled with decorations brought at Tiffany’s.
Posted by odienator at 9:52 PM

I think ST. LOUIS BLUES is Kitt's finest screen performance. I reviewed it awhile back on my blog--I'm absolutely stunned that it has never seen even a VHS release, much less a DVD. She avoids all the cliches of the "bad girl" role, keeping her relationship with Cole's W. C. Handy strictly professional, and it is Kitt who has the film's best line when she calls out Juano Hernandez' minister on his prejudice.

Can't wait to read about BOOMERANG though. Eartha and Grace Jones almost stole the show.

And who can forget this gem: http://www.youtube.com/watch?v=XOMw3oO27kM

Hal, toss a link to your St. Louis Blues review here in the comments section.

Ali, thanks for the link. I've no idea what she's saying but it's catchy and I'm impressed. I may have implied that Kitt couldn't sing in my piece, but this isn't true. I always thought she had a pleasant voice, just not in that 80's song.

Speaking of that voice, here's a cute clip from What's My Line. It's impossible for Kitt to get away with being anonymous because of her unique voice:
http://www.youtube.com/watch?v=BGidHa1eYeY&NR=1

Here ya go, Odie, with a couple more pics of Eartha Kitt circa 1958 (you can never have too many):

Great month of stuff so far; I need to see WHITE DOG.

She was a real legend. I loved the Batman stuff!